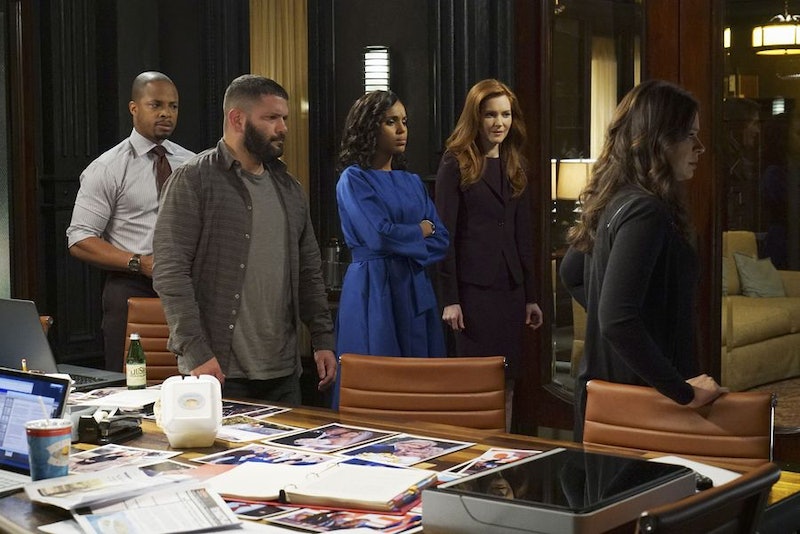 With just one more episode to go before Scandal Season 5 comes to an end, the amount of insanity in this presidential election is getting kicked up a notch. Now that Abby and Olivia have agreed on a temporary ceasefire, it's time for them to focus on what's really important: Taking down Hollis Doyle. As Shondaland's fictional (yet too real) version of Donald Trump continues to gain followers, it's going to take a lot to get him out of the raise. Surprisingly enough, though, Olivia manages to take Hollis out on Scandal , and his concession leads to a pretty unexpected consequence.

For someone who is politically savvy, Hollis isn't actually that brilliant. After offering up the position of his running mate to either Susan Ross or Melile Grant — whoever agrees to drop out of the race first — Olivia arranges a meeting with him, acting like she's cutting a deal with him. Instead, she secretly records every racist thing he says... and then hands the tape over to Sally Langston, who calls him out on her talk show. It's not long before Hollis drops out of the race, because what else is he going to do at that point? BOOM. Handled. It's Olivia at her best, and I love it.

But that's not all Olivia has up her sleeve. She meets with Edison, and gets under his skin by telling him he's not really running for president — her father is, and he's just using him as her puppet. He believes her, and then takes her advice: He blasts Hollis in a big way when he's confronted by reporters. All this time, Rowan's been telling him to leave the fact that he's black out of his campaign, but how can he after everything Hollis has said?

Unfortunately, Olivia's better at the game than he is, and even though everything Edison said was honest and true, it gets him in the tough position of having to drop out of the race... leaving Senator Vargas as the last standing democratic candidate.

The worst is over, y'all. Neither Hollis Doyle nor Rowan Pope will be in control of the fake US come election day. Can we all breathe a huge sigh of relief right now? Maybe, but don't worry — I doubt Rowan is finished.