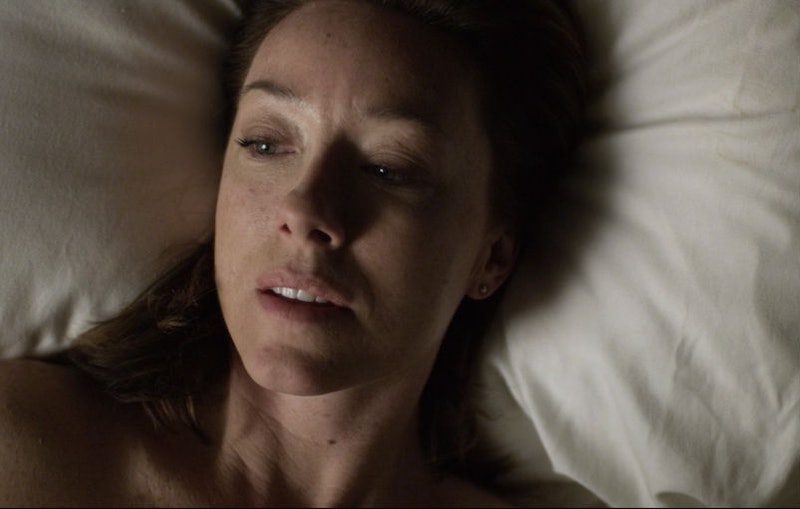 This article contains some House of Cards Season 2 spoilers. Thanks to House of Cards' Season 1 antics, sexual empowerment isn't exactly the term that comes to mind when discussing the Netflix series. Zoe Barnes' problematic sex-for-secrets tactics didn't exactly instill a lot of faith regarding House of Cards' ability to portray more balanced scenes of sexual conduct, but three quarters through Season 2, the series accomplishes that feat in a big way.

Part way through the season a romantic side plot arises between Congresswoman Jackie Sharp and lobbyist (and enemy to Frank Underwood's camp) Remy Danton. It's Sleeping With the Enemy if that movie were about two sexy Washingtonians with conflicting agendas instead of a creepy Julia Roberts movie about a horrible husband. At first, Jackie resists Remy's suggestions that they be something more, but when she gives in, they get close, and she wakes up one morning to Remy's request for a little pillow talk. He asks about her flower tattoos — the one she gets when she does something wrong to further the greater good — and she won't spill, so he reaches down and starts to pleasure her. It's a pretty typical scene until you begin to pay attention the way it's shot and composed.

Throughout the scene, as Remy touches Jackie, the camera focuses staunchly on her face and her expressions of pleasure. Remy is out of focus; there are no musical cues as distractions or mood lightening effects to render our focus less severe. Then, when Jackie rolls over to lie on her back, all we see in the bright sunlight are her expressions of extreme pleasure, her command to Remy to "finish," and her resultant orgasm. In the entertainment world, visual expression of the female orgasm has been given the mark of tawdriness, but in one brief scene, House of Cards proved that it's not a pornographic storytelling element, but rather a real, everyday experience. In Season 1, a similar scene took place between Zoe and Frank, only its staging was far more bizarre and shocking, with Zoe still finishing up her birthday phone call to her father as she comes to orgasm. With Jackie and Remy, pleasure isn't just a salacious plot point, but a part of life and thus a part of this invasively realistic series.

But if this were a scene in a potential Oscar-winning movie from 2010, House of Cards could be facing an NC-17 rating. If you recall, Blue Valentine faced that box-office killing fate when it was released because the MPAA objected to the depiction of actress Michelle Williams' character experiencing pleasure at the hands of her husband, played by Ryan Gosling. At the time, Gosling said in a statement that the restriction "is clearly a product of a patriarchy-dominant society, which tries to control how women are depicted on screen." Since then, various other depictions of female pleasure have allegedly been removed from films, including Evan Rachel Wood's Charlie Countryman . If these strictures have seized the film world, where greater freedom exists, then they're most certainly being place on television, which is held to much stricter standards — just look at what happened when a young woman attempted to sort-of masturbate on a show that then whisked her away to be ravaged by a much older king.

But Netflix isn't TV. And it is TV. Because Netflix owns and exclusively distributes House of Cards, the series has more freedom to experiment with empowering sex scenes that strip the stigma away from expressions of female pleasure. And this steamy, yet unadorned sex scene between Remy and Jackie does exactly that.