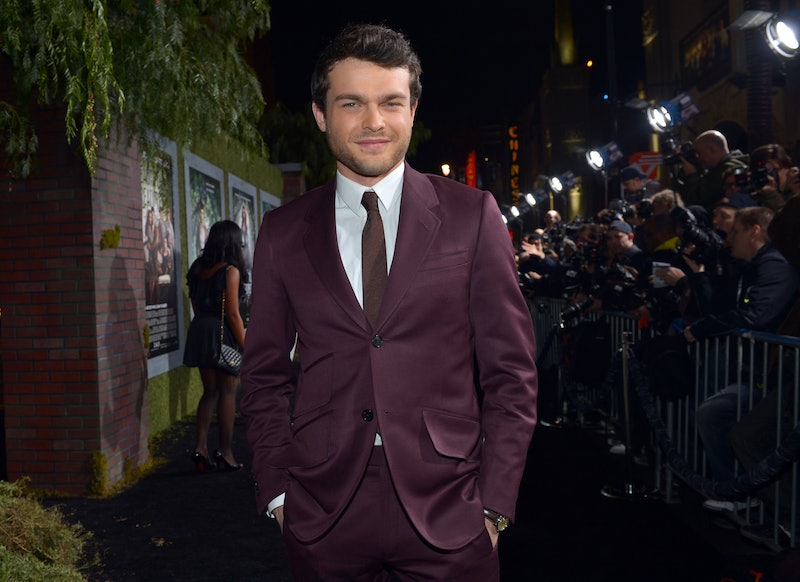 Ah, shoot, it's finally happened you guys. After months of hot Twitter debates and on-the-sly casting, Deadline has reported that Alden Ehrenreich was cast as the lead in the Han Solo spin-off movie. To repeat for those in the back, Ehrenreich, last seen as ineloquent actor Hobie Doyle in the Coen Brothers Hail Caesar! , is going to play Star Wars' iconic Corellian smuggler Han Solo, according to inside sources. Which obviously prompts the question: can Ehrenreich live up to Harrison Ford's portrayal of Han Solo?

No. If you were looking for the answer to that based on the title, and I'm giving it to you now: no. Ford, as far as I'm concerned, is Han Solo (with a side gig as Indiana Jones). This isn't a discussion, this isn't a debate, this is the definitive truth. No. You can go home now.

... alright, you may need me to elaborate a bit more than that. The thing is, my resistance to this casting isn't any commentary on Ehrenreich's ability of an actor. There's no personal vendetta towards him. The problem is that I'm still not emotionally prepared with the idea that this movie is really happening. And I'm being serious, guys I feel like nobody could ever fill Ford's boots as Han, and tampering with the idea at all is something sort of sacrilegious to me.

As far as the films go, Ford has been Han Solo for almost 40 years. It's the role that made him a household name, and maybe it was the roguish handsomeness or the way he delivered a wink, but Solo brought something special to that character. He knew how to be simultaneously charming and arrogant, and that's a really tricky balance to nail. Ford nailed it, though, Ford won over a space princess with it. What's more than that, though, is that Ford made us believe that this arrogant loner could (gradually) become someone really heroic. It's really stirring to watch.

Of course, we've endured some prequel mishaps in the past, so that's enough of a reason to be wary of re-casting one of the series best characters. Consider the following: in the original trilogy, Darth Vader was seen as the most fearsome villain in the whole godd*mn galaxy. He blew up planets for funzies and force-choked anyone who irritated him. When Phantom Menace came out, and Vader was reduced to a tiny blonde child, it was a hard to process. But then, when Attack of the Clones came out and this badass was a blonde, whiny teenager with a rat tail? Catastrophe.

And maybe that's another thing: sometimes you don't need to know more about a character. You just don't. As someone who's also a hard fan of the films, but never indulged in any expanded universe media, I really don't need to know what Han Solo's past is like. The mystery is part of the cool factor: when we meet Han in the cantina all we know is that his ship made the kessel run in less than 12 parsecs and he's not afraid to shoot someone. That's all we need to know. That's all I need to know.

At the end of the day, I don't begrudge Ehrenreich his right to the chance to make an entire new generation of Star Wars fan fall in love with this iconic character. I wish him the best of luck, and I'm sure he's a phenomenal actor. But, in my heart, Ford will always be the one and only Han Solo. I just love him, and I think it's important that he knows that. If Ehrenreich tries to be Ford, then there's just no way his Han Solo will live up to that huge legacy. But if he tries to be Han Solo as Ehrenreich, then he's got a solid shot of making me fall in love in a new and different way.