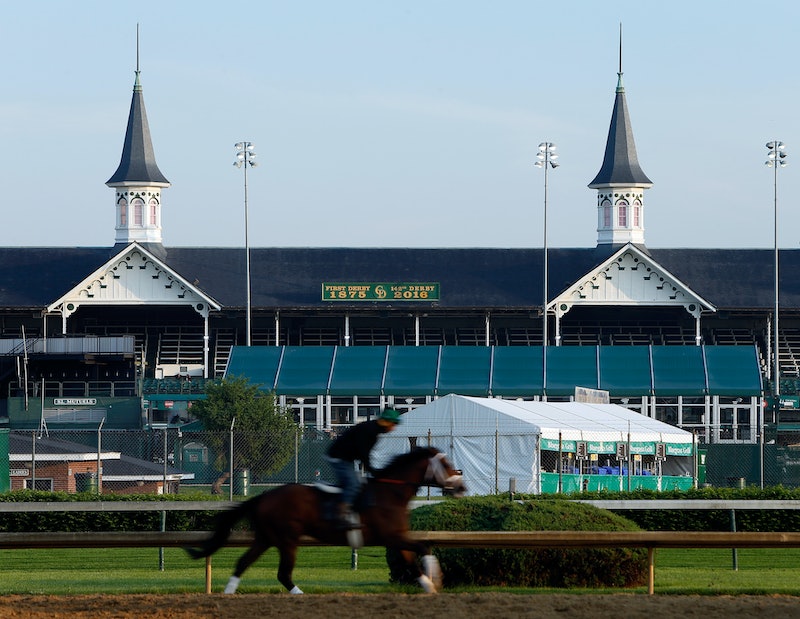 Grab a mint julep and teach yourself how to read betting odds, because The 2016 Kentucky Derby is approaching! The most famous horse race in the world is happening once again at the Kentucky Downs in Franklin, Kentucky. With Derby Day comes the excitement of racing, the majesty of horses, and some of the weirdest names you're likely to find in sports. All the beauty of the Kentucky Derby can be watched on NBC on May 7 starting at 4 p.m. — but not all those who love a good horse race have access to a television. How can you stream the 2016 Kentucky Derby?

According to the race's official website, the Kentucky Derby can be watched live on NBC Sports Live Extra. The streaming service is dedicated to providing all of NBC's sports content to online and mobile platforms. If you're hoping to use the service to watch the Derby, make sure you've already got access to a cable subscription — NBC Sports Live Extra is only available if you login with certain cable providers. If you do have a subscription, you can stream the Derby on the NBC Sports Live Extra website, as well as its app, which according to the Derby website "is available on the iTunes App Store, Google Play, Windows Store, Roku Channel Store, Apple TV and Amazon Fire." The site also says that wagering website TwinSpiresTV will stream the Derby live for anyone with an account.

With those options, it shouldn't be hard to catch the Derby live on Saturday — just make sure you have your stream set up before the actual race begins at 6:34 p.m. ET. It will all be worth it in the end, because when it comes to the Kentucky Derby, fans aren't merely watching a horse race. It takes viewers into the world of each of the competitors, and the fantastical names that are applied to them. So while you may be mourning the fact that once Saturday's race is over, you'll have to wait a year for the next one, perhaps you can find solace in imagining what you could stream if there were TV shows based on the names of this year's competing horses.

An epic miniseries about the myth of the greatest act of espionage in military history. A story about how King Odysseus (played by Chris Evans) snuck an elite group of Greek soldiers into the city of Troy in the guise of a giant horse statue, thus winning the Trojan War. Expect this show to sweep the Emmys for costume design.

Thanks to the 24-hour news cycle, there seem to be an endless amount of pundits trying to put their own spin on the news. So what happens when two kids who host a public access show in upstate New York become the most trusted name in news? Twentysomething best friends Sarah and Matt (Abigail Breslin and Tom Holland) start reporting as a joke, but are soon taking on some of the biggest news stories in the world and landing interviews with the likes of Edward Snowden and Vladimir Putin. Expect this comedy to find a dedicated cult following.

Charming playboy Sam (played by Jeremy Piven) is a professional best man who provides his services to men who aren't good at making other male friends by serving as the best man at their weddings. But when friendship comes at a price, what lengths will Sam go to find a true friend?

A mockumentary series about Oscar Issac (playing an exaggerated version of himself) and his wild and wacky adventures in Hollywood to get the one thing he wants more than anything else in the world — an Academy Award. Expect a large number of celebrity cameos and self-referential humor.

Dr. Marcia Brody (played by Sarah Michelle Gellar) only wants one thing in life — to treat sick people and bring them back to health. However, when she goes overseas to help the underprivileged she gets kidnapped by a dangerous militia with their own agenda. If she wants to survive, Dr. Brody will have to do the one thing she swore never to do — cause pain. Expect this prestige action-drama to land Gellar the Best Actress Emmy she deserved for Buffy.

Sue Fodor (Anna Chlumsky) is a loose cannon. She doesn't stick to the rules, but she gets the job done. Sue Fodor is the best arcade owner in the world, and her rough-and-tumble approach to managing the Fodor Arcade and its prized possession — a limited edition version of the game Gun Runner — gets her in a lot of hot water at the Cunningham Mall. This HBO original is sure to shock and entertain.

Tom Bannigun (played by Greg Kinnear) is prepared to take over his father's company after his passing — only to discover that the will claims that Tom's 18-year-old daughter, Cassandra (Elle Fanning), is to be placed in charge of the company. Tom's pride takes a hit as he has to try and keep his own daughter from running the company into the ground, but what happens when she's better at running a business than her father? This comedy will likely end up on CBS and air for 10 seasons.

The spinoff of Tom's Ready, Mo Tom brings back everyone's favorite business man — but this time, he's managing a car wash with his blue-collar twin brother Mo! Hijinks ensue. This will run for 11 seasons on CBS.

Life is tough in the magical, medieval land of Finellestes, especially when you're just a simple bridge troll. This animated series follows the titular bridge troll Shagaf (voiced by Elijah Wood) as he discovers that just because everyone says you're a bridge troll, that doesn't mean you can't be a hero too.

Cherry Puth (Alison Brie) loves two things — taking care of kids, and taking care of a bottle of wine in the evening. Her life as a nanny in Martha's Vineyard, Massachusetts sounds like the perfect life for her. However, it seems to only thing more profitable in Martha's Vineyard than wine is secrets, and Cherry quickly starts spying on the affluent families of the island and selling their secrets to others for great deals of cash.

A reality series about punk rock icon Glenn Danzig owning and operating a candy store bearing his name. This show writes itself.

It's a shame that none of these shows are real, but the horse names that inspired them absolutely are. These horses and 11 more will be competing for the first leg of the Triple Crown on May 7 during the Kentucky Derby. Be sure to tune into NBC, or stream on NBC Sports Live Extra to get your fill of absurd horse names. Perhaps they'll inspire you to sit down and write that television show you've been thinking about.