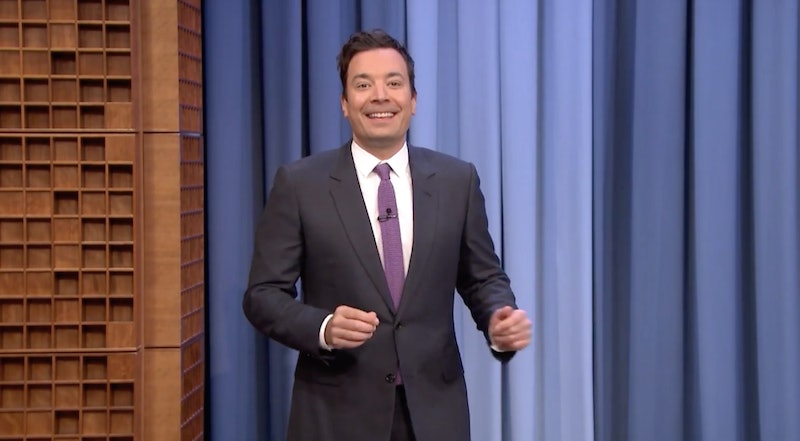 This week has marked the run (or canter, perhaps?) up to the 2016 Kentucky Derby, so no wonder so many of America's celebrities have seem to contracted a serious case of Kentucky Derby fever. The side effects to this annual and most wonderful of sicknesses include an unslakable thirst for mint juleps, an unusual preoccupation with hats, and, for some, a one-week gambling addiction. Talk show host Jimmy Fallon, however, has one particularly distinctive symptom: making predictions as to which horse will win the Kentucky Derby via puppies, the most infallible of predictors.

You heard me right: puppies. Fallon has proved he is America's only living genius by designing a foolproof method for predicting the horse race future via everyone's favorite thing: tiny animals. So how does he do it? He assigns numbers and corresponding horse names to sixteen adorable puppies and making them race against each other – whoever makes it to the finish line filled with kibble in time is the winner. Honestly, my main revelation on watching this was how kooky all the horse names were — Danzing Candy, SuddenBreakingNews, Trojan Nation — are you serious? But names aside, look at these lil' guys go:

If you are now asking yourself: but how reliable is this puppy predictor, anyways? Should I be putting dollars on puppy/horse number eight, Mor Spirit? According to the statistics, it's not the worst strategy if you feel like putting some dollars down (but you know, you do you when it comes to your money). Fallon has only used the puppy predictor to predict one other Kentucky Derby outcome (the 2015 winner, to be exact), but it went pretty damn well. American Pharoah, the horse the puppy predictor selected as the winner went on to win the Derby.

You can't argue with those statistics: So far, the puppy predictor has an 100 percent success rate. So it might behoove you to saddle up on this whole puppy predictor thing. And yeah — you can thank me later if you happen to find yourself doing front crawl in a swimming pool entirely filled with money.