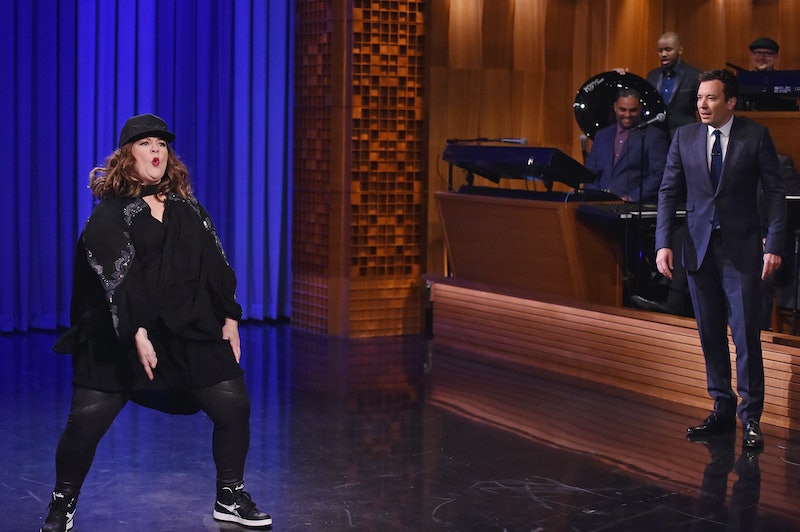 Here's something that will surely make your day brighter: Another Jimmy Fallon lip sync battle on The Tonight Show, this one featuring actress Melissa McCarthy. The Boss star went head-to-head with Fallon and proved once again that she's a woman of many comedic talents. It's been a while since Fallon's been completely blown away by one of his competitors, but McCarthy's lip sync battle left him — OK, and me — completely stunned. "I don't get nervous a lot. I'm pretty freaked out about crushing you," McCarthy told Fallon just before she, well, crushed him.

Fallon started off with “Brand New Key” by Melanie, and pretended to be a roller skater who couldn't roller skate. McCarthy quickly fired back by throwing on a black baseball cap and did a somewhat choreographed dance to "X Gonna Give It to Ya" by DMX. In the penultimate performance, Fallon brought the sex appeal — and an actual pillow — with a rendition of "Pillow Talk" by Zayn Malik.

It was all fairly standard until McCarthy hit the stage for her last song wearing goggles. (Pretty sure no one in the history of Fallon's lip sync battles has ever worn goggles, so you knew this was going to be good.) With a lot of fake leaves, glitter, and even a stuffed wolf, McCarthy knocked "Colors of the Wind" from Disney's Pocahontas out of the lip sync park. Seriously, there was nothing Fallon could do to bring himself back to the top after this one. Check it out below.

McCarthy — 1, Fallon — 0. (Sorry, Fallon.) In the past couple of years, McCarthy has made a name for herself as a leading actress in some pretty high-budget comedy films. First, there was her breakout role in Bridesmaids. Then she starred in Identity Thief and The Heat. As an actress who didn't become an A-lister for playing someone else's love interest, McCarthy's pure comedic talents have been a breath of fresh air. In 2014 and 2015, she was the lead character in both Tammy and Spy, and now she's about to prove once again that she can carry a film all on her own in the upcoming film The Boss.

McCarthy is one actress who doesn't appear to be slowing down any time soon. With lip syncing chops like the ones she demonstrated on Late Night, let's hope there's something music related in her future.