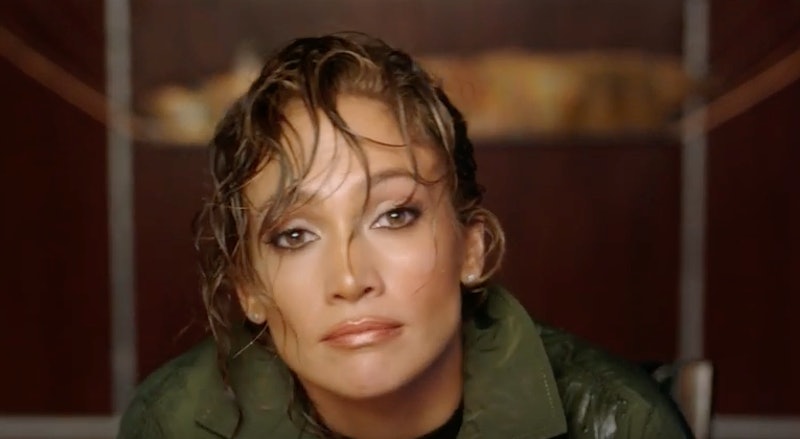 Jenny from the Block is getting political. On Friday, Jennifer Lopez released a music video for her song "Ain't Your Mama," which samples Hillary Clinton's famous "women's rights are human rights" speech that she delivered to the United Nations in 1995. And regardless of how you feel about Clinton, you can see how Lopez's music video uses the speech emphasize the visuals and lyrics, giving the song a new layer of context and totally embodying its spirit. J Lo, you've done it again.

The video for "Ain't Your Mama," which was written by Meghan Trainor, shows J. Lo in a variety of roles women have been forced into, including a 1950s housewife with an ungrateful husband and a 1980s businesswoman dealing with a creepy, inappropriate boss. It's a cartoonish version of these tropes that women have to play into, but I love the kitsch of it, because it really highlights just how absurd it is that women are still pigeonholed into these archaic roles.

As for the Clinton sample. In 1995, Clinton, then First Lady, delivered what would become her most well-known and resonant speech at the United Nations Foreign World Conference on Women in Beijing, China. In her address, she called for action to give a voice to women and girls the world over, including the injustices against women in the United States:

J. Lo is definitely speaking freely in "Ain't Your Mama." The lyrics are simple, because the message at its core is simple but crucial: Women are not here to hold men up, but to raise themselves up. And though the stereotypes might seem a little dated, they really aren't. Even in 2016, there are those attempted to strip women's rights away and equal pay is still not a reality.