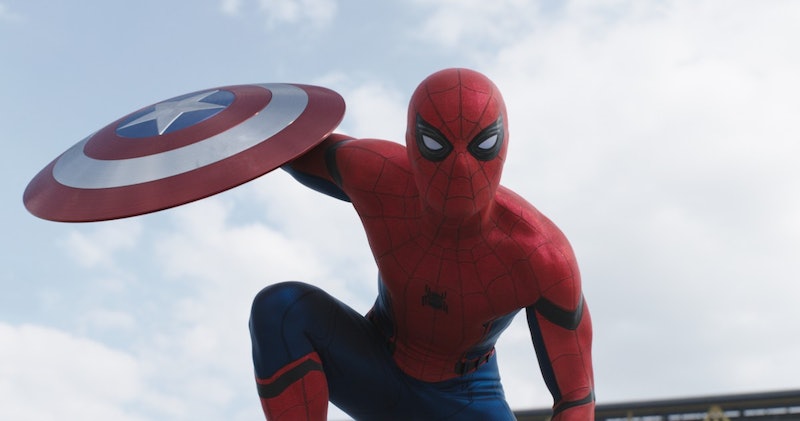 Captain America: Civil War may mark the third movie iteration of Spider-Man in less than 15 years, but this Peter Parker stands out from the rest. Spider-Man's age in Civil War helps revitalize the character, giving him an earnest perspective that the movie's writers, Christopher Markus and Stephen McFeely, wanted to contrast that of the other Avengers. "[Marvel] definitely wanted to make him younger, much closer to how the original comics sketched him out ... It also, though, for our purposes, really helped to bring a new point of view into this conflict," McFeely tells Bustle in an interview.

This Peter Parker, the first to appear in the Marvel Cinematic Universe, is 15 years old, according to the writers, and watching him gleefully interact with an exasperated Tony Stark is a highlight of Civil War. However, McFeely and Markus wanted to use Spider-Man's youth for more than humor. "This is not another hero with a long history or even a long relationship with the Avengers," McFeely says. "This is the wide-eyed kid who can bring a new voice and a new perspective to it. Because when you have ... so many characters, you’ve gotta make sure they all don’t have the same opinion about what’s going on. And so he definitely has a different opinion."

But that's not to say humor wasn't an important part of Spider-Man's role in Civil War, a movie that poses difficult, ethical questions to its heroes and audience alike. "It’s also very important in a movie like this where the stakes are high, friends are fighting friends, that it not become overly dour," Markus says. "So bringing in Spider-Man, and also bringing in Ant-Man, provided this necessary injection of lightness and humor right at a time when it could be getting a little too heavy, so it helped balance everything out and keep it, on some level, fun."

Another goal for Civil War was to faithfully adapt Spider-Man from Marvel Comics, which stopped McFeely and Markus from worrying about fans' reaction to their new version of the character. "We’re really not changing his personality, we’re just making his age more appropriate to his personality," Markus says. "The more ... hyperactive he is at an older age, the more he seems a little bit stunted. At 15, that personality is perfectly matched, so it just seemed to make everything make sense, in a way."

Surprisingly enough, it was the prevalence of other Spider-Man movies that gave the Civil War writers more freedom to craft their version of him. "The thing about Spider-Man was, whether you liked them or liked some of them or not, there have been five movies in not a very long span of time, so there [were a lot] of things we did not have to say," Markus says. "The origins, his background, his psychological hang-ups, are all firmly implanted in people’s minds, so we didn’t have to cover any of that. So we could do sort of just the two best scenes we could with Spider-Man in them and that would be enough."