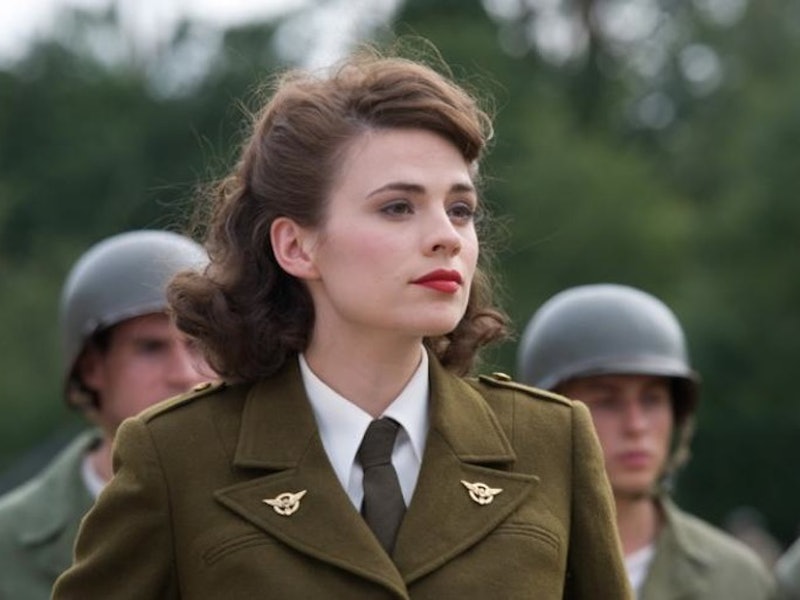 As another season of television winds down, summer series revving their engines for their own premieres. In assessing what's worth renewing, there's some talk over at The Hollywood Reporter of shows that are on the bubble of cancellation. Now, being "on the bubble" may sound like a fun phrase, but it's not. It's three of the most ominous words that can be strung together if you work in television. When the bubble bursts, the fun is gone. Some shows currently on the bubble, like the adapted Rush Hour (Are you watching? You've never heard of it? How surprising), may warrant a cancellation. But there is one show on this list that is giving me heart palpitations. It's Agent Carter . If this show is cancelled, then what will I do with my life?

Agent Carter did nothing wrong. Agent Carter is a fabulous slice of television heaven. On a network rife with by-the-numbers melodramas (I'm looking at you, Scandal) and approachable but by-the-numbers comedies (ahem, Modern Family), I can tell you honestly that Agent Carter is a cut above the rest. Like it's sibling, Agent of S.H.I.E.L.D., Agent Carter is an extension of the cinematic Marvel universe. It's a necessary extension. Not only do we get to bring the magic of Marvel into our own living rooms, but Peggy Carter is one of the few examples Marvel can offer to it's viewers of a lead female character holding down her own franchise.

Peggy Carter is one of the reasons I fell in love with Captain America: The First Avenger five years ago. She was strong, intelligent and capable in a role that wasn't widely available to the other women in superhero films at the time. She may have been a love interest for Steve Rogers but she was positioned as his superior. Steve had to gain her attention. She was never a damsel-in-distress. She was allowed to be vulnerable but she didn't let it cloud her judgement.

Luckily, these traits were carried over into Agent Carter. Additionally emphasized was the fact that she was a great foil to her male colleagues. The men she worked with have a tendency to undervalue her but it doesn't deter her from being her best self—or doing her best work. Peggy's level of can-do heroism recalls the independence of 1940s and '50s actresses like Barbara Stanwyck and Rosalind Russell. These women were allowed to embrace their beauty as well as embrace rolls that ranged from tough to soft from one film to the next.

Perhaps another major factor is the nostalgia factor. Agent Carter is full to the brim with period-appropriate clothing, colloquialisms, and fashion. There's a rarefied Marvel/ABC sheen that coats the whole show, allowing it to be feminist without being militant, cheeky without being clumsy, and just plain fun to watch. There's a safety to it that is comforting. Don't get me wrong: I love my shows edgy, toeing lines all over the place. But there's something relaxing about the semi-fluffiness of a show like Agent Carter.

While I can understand that the show might end, I really hope it doesn't come to fruition. With the confirmation of lead Hayley Atwell's new role on the upcoming Conviction, chances are slim the bubble won't burst for Agent Carter. While it's a long shot that she could do both roles, Atwell is so stinking talented that it would be unfair to spread her so thinly. To quote Ron Swanson, I wouldn't want her to half-ass two things. I want her to whole-ass one thing, which would be Agent Carter.

No matter what happens, I know I'll have to re-visit Agent Carter from the beginning. Who wants to have a viewing party with me?