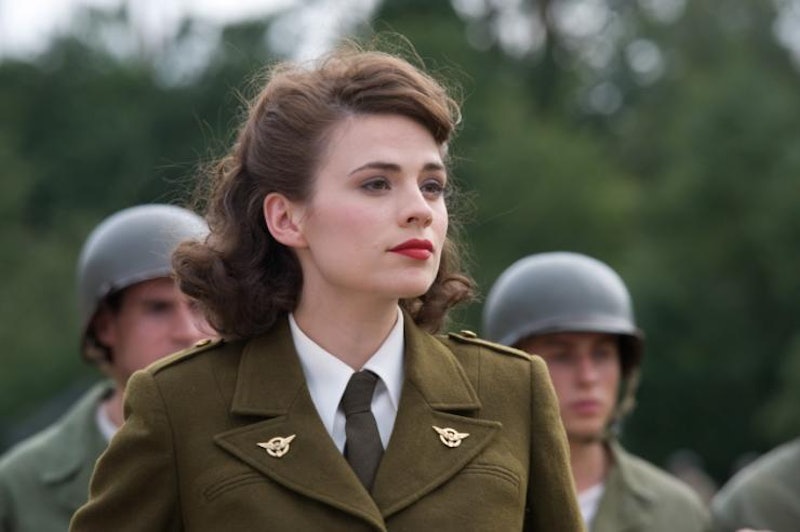 When it comes to offering up intelligent, strong, and dynamic female characters — superhero and human alike — Marvel has the market cornered. Despite being delinquent in terms of producing a solo female superhero movie, Marvel has been consistently feminist onscreen. Rarely are the "girlfriends" just girlfriends, or the female heroes used as set dressing in the world of Marvel. Pepper Potts, Black Widow, Peggy Carter, Storm, Lady Sif, and the rest of the women who populate the world of Marvel movies have all had big damn hero moments of their own.

Marvel isn't perfectly feminist. They could be doing a lot better when it comes to diversity among the female characters, and they have yet to introduce any LBGTQ romances to the movies. However, they have given women of all ages amazing female characters to look up to. Some of them are warriors, some are scientists, and others are shrewd businesswomen — no matter what their roles are, they all have agency and they all matter to the stories being told.

From the time Pepper saved the day to Mystique finally embracing her identity as a mutant, these are the most feminist moments the Marvel movies have produced so far.

It's Pepper, not Tony, who ultimately takes down Obadiah in the first Iron Man when she overloads the arc reactor. Before that, Pepper saved Tony's first arc reactor, which was the only thing that kept him alive, and she covertly worked with S.H.I.E.L.D. (and named the organization!) to obtain evidence against Obadiah. Pepper may not have superpowers, but, when you are as brave and smart as she is, you really don't need them.

Natasha has so many feminist moments to choose from, but her role in saving New York City (and the world) is right at the top. Natasha is a human spy with no superpowers, but she took the lead in a battle against aliens and ended up using Loki's staff to close the portal, saving the world in the process.

Peggy shuts down sexism at every turn. As a woman in a male-dominated profession, in an era where women were not often high ranking military officers, Peggy refuses to be talked down to by anyone, including Steve Rogers. In their first conversation, Peggy makes it clear she is to be respected as a woman and an officer, and in the process no doubt informs Steve's ideas of what it means to be a soldier.

4. Darcy & Jane Have Each Other's Backs

As BFFs, Darcy and Jane always have each other's back. Their friendship reached new heights in Thor: The Dark World, though. When Jane discovered something ancient and scary was screwing with Earth, it was Darcy who kept the investigation rolling while Jane was in Asgard. Even when they were worlds apart, Darcy and Jane managed to work together to protect the universe.

It took Mystique a long time to stop trying to bend to societal norms and embrace her identity as a mutant. The moment she finally accepts herself is a beautiful one, and it leads to her helping Beast accept himself too. Mystique allowing herself to be proud of who she is will never stop being an amazingly feminist scene.

6. Sharon Carter Stands Up To Hydra

Thanos killed Gamora's entire race and then claimed her as his daughter in order to weaponize her. This level of brainwashing would break most people, but, the first time Gamora had an opportunity to turn on Thanos, she did so in an epic fashion, showing no remorse.

8. Kitty Continues Projecting Wolverine Into The Future Despite Being Wounded

Kitty didn't let a little thing like blood loss from a stab wound stop her from projecting Wolverine back in time in order to save the world from a bleak future. She continued using her powers for the greater good while she was basically bleeding out — and she lived to tell the tale.

9. Hope Shuts Down Her Father's Misogyny

Ant-Man was frustrating because Hope was so clearly the most capable person to don the suit, but every time she shut down her father's attempts to "protect" her only showcased how competent, strong, and resilient she truly was.

Natasha played into Loki's ego to get the information she needed beautifully, while also revealing why she works so hard for the good guys. It is a masterful scene in which a male character is so distracted by his own power he doesn't realize he has lost the upper hand.

Scarlet Witch was full of anger and hatred for what happened to her family, but she was still capable of seeing the danger of Ultron. Turning against Ultron and choosing to fight with The Avengers was decision fueled by conviction and personal strength.

In Iron Man 3, Pepper saved Tony more than once (again), but her crowning moment of awesome came when she saved herself and handily dispatched her kidnapper.

These are just a few of the feminist moments Marvel has served up so far. Here's hoping Marvel's future movies will be as awesomely feminist as their current crop.