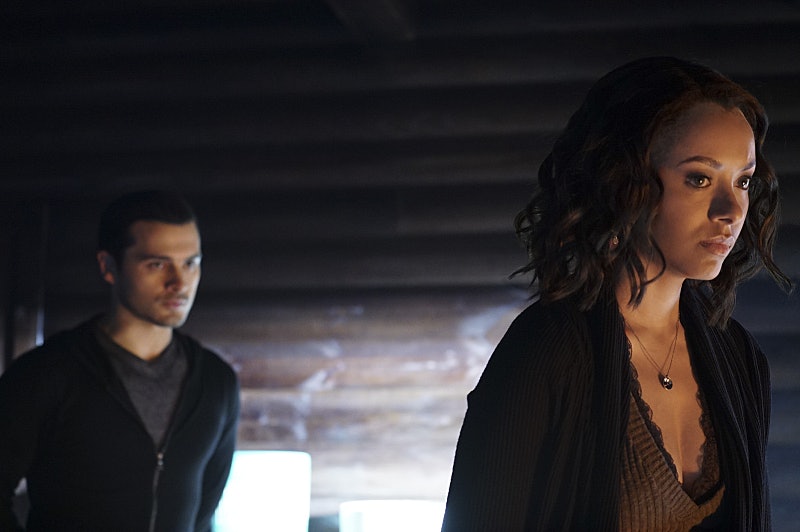 So here's the thing — ever since they got stuck in that alternative plane together, I've really come to love Damon and Bonnie's friendship on The Vampire Diaries. But now that our beloved Bon-Bon is in full-on Huntress mode, this close relationship of theirs has taken an unfortunate turn. However, that doesn't necessarily mean that all hope is lost. Thanks to a little research on Enzo's part (aka torturing a Shaman), there may be a way to cure Bonnie of the Huntress curse on The Vampire Diaries . It turns out that all they have to do is sever Bonnie's link to the last remaining Everlasting figure. The only problem is that in order to get to it they'll need to go back inside The Armory, where an evil being is currently taking up residents.

Whatever it was that escaped from the confines of the basement is just lying in wait inside that building, biding its time until someone breaks Bonnie's spell and lets them loose upon the world. And it seems like that someone is going to come in the bromance form of Damon and Enzo. You know, because why wouldn't they willingly agree to unleash a dangerous being from its prison cell if it meant serving their own personal means?

Don't get me wrong, I was our old Bonnie back just as much as anyone, but these two didn't even hesitate to think about the ramifications that could come from this decision. It's still kind of unclear what this new formidable foe is, but considering it has the power to turn normal human beings into full-blown killers, I'd say its something you might want to keep safely hidden away. I mean, couldn't we just ask Alaric to have his twin daughters syphon the Huntress magic out of Bonnie? That's kind of the main gist of their powers and would certainly come in handy in a situation like this. Just saying!

But judging by next week's promo, that is not how things are going to play out. Those doors are going to get open whether it's a good idea or not. Let's just hope that this thing doesn't end up working to Huntress Bonnie's advantage. Because something tells me that would make for one very unstoppable force.