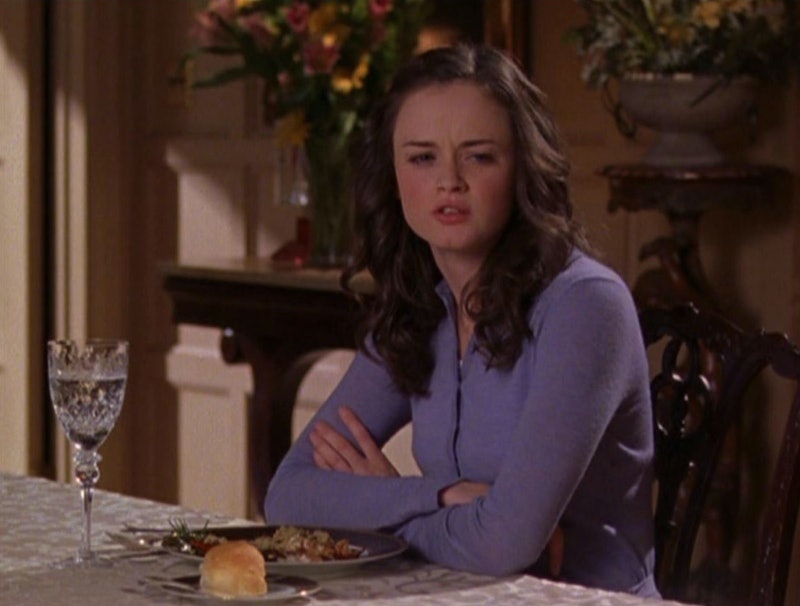 Being a Gilmore Girls fan isn't always easy. Honestly, if you watched the show while it was running, you're probably pushing "old-millennial" status now, which means endless sass when you reveal your favorite show is Gilmore Girls. But that whole tired "Aren't you too old for that teen girl TV show?" thing is just the creak of the floodgates opening as Gilmore Girls haters get warmed up for their extremely detailed critique of the show. For that reason, there are a lot of things that Gilmore Girls fans hate hearing from those jealous detractors.

Eye-roll away, haters. It's a cold dark world out there, and if unwinding to a couple of episodes of a show, whose hues are always autumnal, whose characters bat about Wildean-level witty one-liners, and whose single mother is ever peppy is a crime, then just call me a repeat-offender. Anyone who's actually seen the show will know that it draws on a vast and sophisticated array of pop culture references. While the content may be PG-13, the tonality's self-consciously cynical and adult.

So, for all you Gilmore Girls fans out there, here's the best gift I can give you: a list of the well-worn insults Gilmore Girls haters like to trot out. Remember: fail to prepare, prepare to fail. As military strategist Sun Tzu's classic text The Art of War states: assessing the weaknesses of your enemy's strategy is paramount. Game on.

1. "They Just Talk So Fast. I Can't Understand A Word They Say"

You know what else offered a lot of fast, witty dialogue? Screwball comedies, one of the most critically-acclaimed genres from the Golden Age of Hollywood — and also easily the genre offering the most words per minute. As Geoffrey Macnab has commented, "On His Girl Friday (1940), Howard Hawks's reworking of The Front Page, Cary Grant and Rosalind Russell (as the editor and his star reporter) were reaching about 240 words a minute." This "was almost double the average speaking rate of 100 to 150 words."

You've overcome their issue of speed, and now they're all over you with the tonality. Sure, the way Gilmore Girls characters speak is not a reflection of everyday conversation. They pepper their dialogue with obscure pop culture references, one-liners, and blistering put downs. But isn't that what makes TV fun? That it's not like real life?

3. "The Show's Sexist Against Men. Stars Hollows' Men Are Portrayed As Inept"

Sure, Stars Hollows' men aren't perfect. Luke's wedding shy. Michel isn't the ideal employee. Christopher's shown to be a so-so father, turning up in Rory's life only every so often. But aren't the women equally as inept at times? Remember Lorelai channelling the Runaway Bride rather than confronting her feelings and breaking off her wedding to Max like a real adult? Or Rory dropping out of Yale? The show's point is that the very state of being human means you're prone to error, regardless of gender.

Yeah, so? In an era of programming when the other main representation of teenage girls were rebellious bad girl Marissa Cooper of The OC (who was into shoplifting, abusing alcohol and arguing with her mother) and the hyper-sexualized Buffy, Rory was a breath of fresh air.

6. "Emily Gilmore/Paris/Kirk Is SO Annoying"

If all the characters were sunshine and rainbows, the show would get old pretty fast. It's Lorelai and Rory's interactions with the more challenging members of their family/friend group that give the show its depth and heart.

7. "I Hate The Way Lorelai Dresses"

Totally a strategic decision on the part of the show to abate our choking envy of Lorelai Gilmore, she of the perfect hair/eye color combo and razor sharp wit. Smart move.

Lane Kim's hyper strict, ultra-religious mother has been criticized for trafficking in damaging stereotypes about Korean mothers and this is certainly true — to some extent. However, as a previous Bustle article has already explained: Lane Kim is based on Amy Sherman-Palladino's longtime friend Helen Pai, who also grew up under the watchful eye of a strict, Adventist mother.

9. "All They Do Is Drink Coffee And Eat Junk Food"

One more time with feeling: you say that like it's a bad thing.

Sure, Lorelai is painfully eager for most of the opening series for her kid to get into Harvard, but doesn't that stem from who Rory is rather than from Lorelai's personal agenda? Rory's defining characteristic is that she's not just smart; she genuinely enjoys studying. As such, an Ivy League school doesn't seem like such a terrible end goal for someone who's so naturally academic.

Yes! Star Hollows is a happy-clappy world full of troubadours, town meetings, and Sam Phillips la-la acoustic guitar backing music. But isn't that why we watch TV? Not just for gritty Breaking Bad style programming, but for a shot of pure escapism?

Ladies and gentlemen of the jury, I rest my case. Gilmore Girls was and once again this year will be one of the best shows on TV, so please go forth and use these arguments to conquer the few stragglers who insist on denying the show's brilliance.