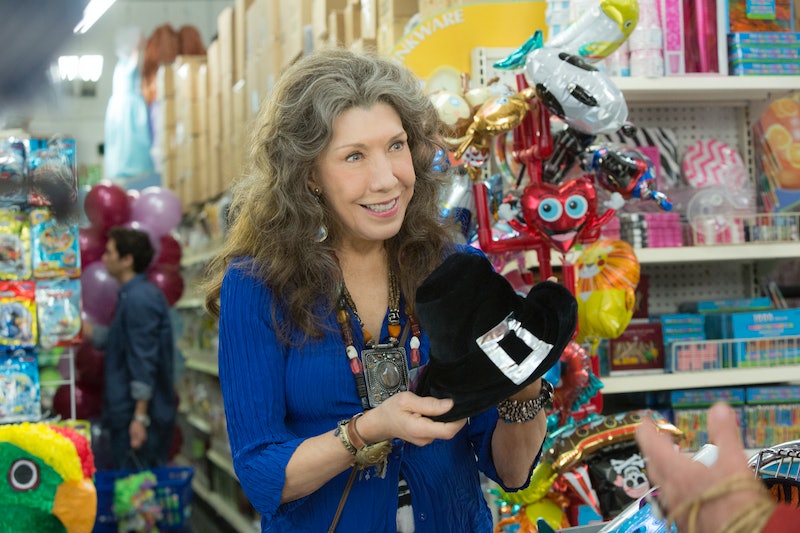 Grace & Frankie Season 2 dropped on Netflix on May 6, and the second installment of the series features some touching hilarity about its title characters, who are experiencing new beginnings during their golden years. I marathon-ed the comedy series in its first weekend, and I have to say, the second season might be better, funnier, and more emotional than the first, especially when it comes to tackling serious issues. In Episode 12, the Grace & Frankie portrayal of assisted suicide is handled incredibly well, and it truly sets this series apart from anything else on the air right now. Usually, TV shows shy away from showing portrayals of assisted suicide (or euthanasia), and the rare times they do, they're dark, tense, and filled with moral dilemmas, suffering, and anger — all things definitely associated with ending another human being's life. But on Grace & Frankie, the depiction of the act instead involves a big party and celebrating a life well-lived.

In Episode 11, longtime friend and legendary party-thrower Babe (Estelle Parsons) drops by to reminisce with Frankie about old times, go shopping so they can throw the "party to end all parties," and ask for her old friend's assistance in going to "the one place you don't come back from." The next episode begins with Frankie and a self-assured Babe prepping for the party — and Babe's death by sunrise via drugged pudding. After trying to joke about it, Babe confesses to Frankie that her cancer has returned, saying that "it's everywhere," and that she's refusing treatment, because of her previous poor experiences with chemo, radiation, and surgeries.

"Why go through the horror of treatment if it's not going to work?" Babe later remarks to Grace, who views death as God's choice. Babe would rather see it as her own choice and shoots down Grace's proposed living alternatives to ending her life. Grace decides she won't support Babe through this decision, and throughout the episode, Frankie, too, expresses her doubts about assisting in Babe's suicide. Yet Babe reassures her that this is what she wants and Frankie can't help but be loyal to her friend. The backyard party they throw turns out to be a huge, raucous success filled with old friends from near and far — along with Grace, who shows up at the end. At sunrise, Grace and Frankie say their goodbyes to Babe in an empty house. Despite Grace's last-minute pleadings ("What if there's a miracle?"), Babe takes the pudding, appreciating the good life she's had.

This portrayal of assisted suicide differs from the typical approach seen in TV and film, as seen recently in How To Get Away With Murder, Million Dollar Baby, and The Hours. Euthanasia is often shown in the media as being an escape from long-term suffering and disability, and a test of moral character, yet while that might be often be the case, Grace & Frankie depicts Babe's assisted suicide as more about friendship, loyalty, celebrating of life, and making your own choices. It's a beautiful tribute to friendship in the golden years and a life well-lived.

More like this
Where Is Charlie Evens Now?
By Morgan Leigh Davies
Meet Charlotte Laws, The Woman Who Helped Take Hunter Moore Down
By Arya Roshanian
Here’s What Hunter Moore Is Up To Now
By Arya Roshanian
'The Sandman’s Ending Is A Departure From Neil Gaiman’s Comic Book Series
By Kadin Burnett
Get Even More From Bustle — Sign Up For The Newsletter