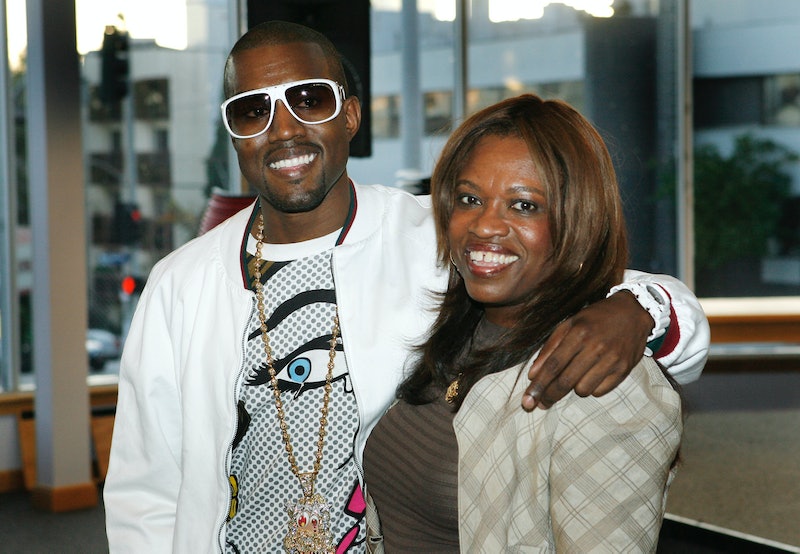 Kanye West is having an emotional Mother's Day. First, the star got a full-blown orchestra to perform for Kim Kardashian, his wife and mother of his two children, North and Saint. Later, he tweeted that he found a gold necklace belonging to his late mother, Donda, in her storage. And finally, West tweeted a sweet tribute to Donda, as well as to his wife and kids, that will make even the most cold-hearted shed a few tears.

It's no wonder West decided to celebrate Mother's Day so many times publicly; he must really be feeling a whole lot on this day, from grief over his mother's tragic passing to love and appreciation for Kardashian and their children. And while sometimes, West's use of Twitter is unorthodox, to say the least, it's nice to see him using it for good by sharing touching tweets in honor of Donda, who died in November 2007.

West famously had a strong relationship with his mother, who raised him as a single mother in Chicago while also being a noted scholar and college professor. During her life, Donda sat on the chair of the Kanye West Foundation, an educational nonprofit, and served as the chief executive of West Brands, the parent company of her son’s businesses. Sadly, she passed away nine years ago from complications from surgery. West mentions his mother in many of his albums, with his song "Hey Mama" in Late Registration being a full-blown dedication to Donda:

“Hey Mama, I wanna scream so loud for you/ ’Cause I’m so proud of you/ Let me tell you what I’m about to do … I appreciate what you allowed for me, I just want you to be proud of me.”

Despite all the intense feelings West must be dealing with today, he managed to string together some beautiful words that represented what he — and others who've lost their moms — are likely going through on Mother's Day.