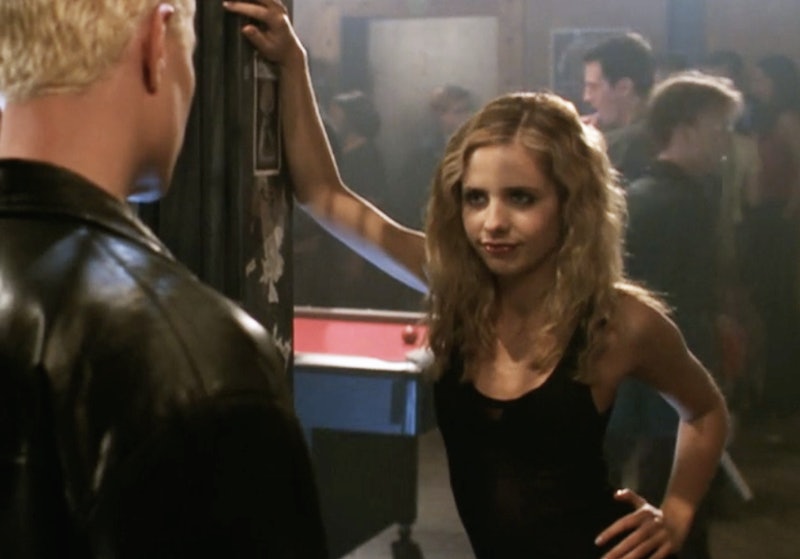 Nothing puts quite a shine into your day like a good episode of the greatest show of all time, Buffy The Vampire Slayer. There are a lot of girl power vibes, some heartbreaking situations, and hilarious mythology that make Buffy the best show to watch when you're having a bad day. Watching Buffy and Angel's completely and inevitably doomed love instantly makes a breakup feel 10,000 times better. There must be some serious health benefits to the inevitable laughter that magically occurs when Xander cracks a dad-themed pun. And don't even get me started on how the kickass fight scenes turn that sad energy from your day into the tune of some pounding girl power beat.

The residents of Sunnydale know a bad day better than anyone. I mean, a bad day in Sunnydale leads to death more times than not, so they really get it. (How can one town fit so many cemeteries?) So it only stands to reason that the residents of this town would be the perfect companions for such a day. Whether you're in need of a deeply emotional pep talk, or just a gentle cuddle, Buffy and the Scoobies are the hook up. These are the best episodes of Buffy the Vampire Slayer to watch when you're having a bad day.

If you're one of those people who's like "I don't like musicals because they are unrealistic," you need to hold up a second and take this musical episode in stride. Literally nothing in Buffy is realistic, so this episode fits in perfectly and just so happens to also be hands-down, no questions asked, the best piece of media available to counteract the sads.

There's something about Season 6 that really, really helps with a bad day. Maybe it's because it's, hands down, one of the saddest seasons — Joyce is dead, Buffy feels like she's at a life dead-end when she has to drop out of college, Willow's getting too magicky — but still the characters manage to find jokes and joys in it. It's a reminder that the world isn't perfect, but at least we still have television.

At first we were like, "why is that strange young girl still in the Summers residence?" Then we were like "why is Dracula so oddly good looking even though he is scary and pale?" But, no matter what, the Dracula episode, and the goofiness that goes along with this episode, is perfect.

This finale episode has it all: the big school dance, a death and resurrection, a really scary bad guy. It's a seriously intense episode. When watching it, do not be surprised if you instantly think to yourself, "I need a white dress, and I need to be Buffy for Halloween this year." It makes for a great mood lifter.

Speaking of Halloween, the first Halloween episode in Buffy is on point and hella inspiring. Our girl, Willow, really finds herself and takes control of the situation when everyone's costumes from the new shop in town turn them into their costume. Buffy's an 18th century noblewoman with a questionable accent, Xander's a soldier, and Willow comes back as a ghost who walk through walls. Being forced to bear all and take control gives Willow a lot of much needed confidence, and this episode will also give you strength to do the same.

Nothing puts life in perspective quite like an episode that reminds us that the grass is always greener on the other side. In this episode, a scorned post-breakup Cordelia unknowingly makes a wish to a vengeance demon named Anyanka that Buffy Summers had never come to Sunnydale. Not only does it teach a lesson that sometimes needs to be taught on a bad day, it also features vampire Willow and Xander — which is really, really funny, though a tad scary.

Again, the world loves a big dance in its television and film universe, so the prom episode is obviously a big hit. At first, it's sad for Buffy, because Angel breaks up with her when she asks him to go to the prom. Then we're sad for Cordelia because her father made "a little mistake on his taxes... for the last 12 years." But then all is well, because Anyanka-turned-Anya goes to prom with Xander, a beautiful love is born, and Buffy's class gives her a big umbrella for protecting them all those years.

Who doesn't like a body swap plotline? In this episode, Faith has just done some magic gobbledy-gook to swap bodies with Buffy, so that Buffy would end up in the custody of the Watcher's Council and Faith could go on and live her life in freedom. First off, it's fun, because these two girls are just figuring each other's bodies out and it's hilarious. Then Faith-in-Buffy goes through a bit of a self-hating battle with Buffy-in-Faith. The cathartic feels we get as she pummels her own face in are great for the bad day.

I don't always support watching series finales, because usually they're disappointing or too sad. But "Chosen," the finale of Buffy, is seriously on-point. If your adrenaline doesn't sky rocket after seeing all those girls working together and kicking butt, you need to go to the doctor immediately.

This might go on a list of the strangest and yet most relatable episodes of Buffy of all time. Buffy finds herself hanging out with some boys and drinking. Of course, the beer is magic, so she and the guys slowly turn into cavemen. Who hasn't been there before?

Honestly, one doesn't even need this whole two-part episode to get cheered up. All you really need is Kendra saying in her Jamaican accent "I am Kendra the vampire slayer." Kendra's the bomb diggity, from her crop top to her awkward shyness around Xander, of all people, to her stake, Mr. Pointy. If just her introduction isn't enough for you, I suggest fast forwarding through this episode strictly for Kendra lines.

First, this episode gets you because Andrew is taking video of everyone to tell the tale of "Buffy, Slayer of the Vampyres," and it's just the right amount of delightfully goofy. Then, Buffy forces Andrew to confront himself for his crimes, and the episode takes a turn for the even more cathartic. I cry right along with the murderous nerd every time.

Ethan Rayne comes back to town with a sinister plan to feed chocolate to the adults and make them act like teenagers, so they will be distracted and he can steal a bunch of babies from a local hospital for nefarious reasons. This episode is perfectly ridiculous, and the antics of Giles and Joyce are fantastic — right down to the sex on a police car.

This episode, in which Buffy's mom dies and there is nothing magic can do to save her, is good for the sort of bad day where you just need to cry everything out to feel human again. The only downside is that you may end up spending the entire episode crying, so make sure to hydrate when watching this one. And have a stuffed animal or pillow to snuggle.

Who hasn't wished they could just say some magic words and then suddenly be beloved by all? This Jonathan-heavy episode, in which the not-yet-villainous character has created a Jonathan-centric universe, is a relatable experience. Not the "being beloved" part per se, but definitely the desire to be held in such high esteem.

When Buffy has a conversation in the crypt with one of her former classmates-turned-vampire Holden Webster, both the viewer and Buffy are reminded that death is a part of life. But if that message of acceptance is a little too heavy, this episode is definitely fun if only to witness the Buffy/Holden banter.

This episode has so many levels of good. First, Spike is tied to a chair, being held prisoner and making snarky comments. Then, everyone is trying to hide the fact that Angel is in town and mostly manages to do it successfully. Next, Willow and Giles spend a great deal of the time arguing about how to deal with the monster-of-the-week: a warrior ghost from the Chumash tribe. There's a lot going on in this episode, which is perfect if you need a good distraction from the horrors of the day to day.

Cordelia and Buffy bond in the most exceptional way in the midst of their frenemy struggle. The two are fighting over who will be voted for Homecoming Queen, but, on the way to the big dance, are captured by a Mr. Trick, who is leading SlayerFest '98, a big hunting trip for demons. Mr. Trick believes Cordelia is also a Slayer, Faith, hence her part of the kidnapping. Watching the girls' battle for their lives, and their battle of wits, makes this the perfect distraction episode.

"Innocence" is actually and scientifically the best episode from any show ever to watch when you've just been through a bad breakup. In the episode, Buffy must deal with the ramifications of losing her virginity to Angel — you know, that he turned evil. Angel-turned-Angelus, and the rest of his evil crew, summon this big scary monster, and there's nothing quite as amazing for the recently single than seeing Buffy shoot that monster with a rocket launcher. The sexy watery fight scene against Angelus also helps.

Any episode with Spike is a good episode, but his best work comes when he first shows up on the scene, planning to murer the Slayer at her own high school Meet the Parents night. It's our first instance of being a little scared of, but also attracted to, Spike. Joyce figuring out that Buffy can take care of herself is also a nice touch, though nowhere as exciting as Mama Bear attacking Spike with an axe.

Not to be outdone by any of the past breakup episodes, "Lovers Walk" kills the game. Not only do we have Xander and Willow feeling slight attraction for each other, despite both being in separate relationships, but we also get Buffy and Angel trying to fruitlessly be "just friends," and a Spike who is horribly depressed and broken up about Drusilla. When Spike has girl talk with Buffy's mom about his sadness over the breakup, it feels like we are all telling Joyce about our sadness. When Spike drives off into the sunset scream-singing "My Way," it should give us all hope for our futures.

What better way to lift your spirits better than to watch an episode that centers around the Scoobies' funny man? In this episode, Xander proves himself to himself. While everyone in the group think Xander can't take care of himself, and that saving the world means they will also have to save him, he proves himself as a man with serious bravery and strength. The rest of the team is off saving the world in some other way, and seemingly have no time to deal with Xander's current issue, but it's all right. Xander faces down the undead high school meanies who are trying to blow up the school with his willingness to die for everyone else. This episode also gets points because the sex scene between Xander and Faith is steamy.

Hands down, 10 times out of 10, Buffy The Vampire Slayer is the show you want to be watching on a bad day. So the next time you miss your alarm clark, get a parking ticket, spill burning coffee on yourself, lock your keys in your car, and get a bad hair cut to top it all off (or whatever happens to you to make your day bad), consider Netflix and chilling solo with some of these Buffy greats.