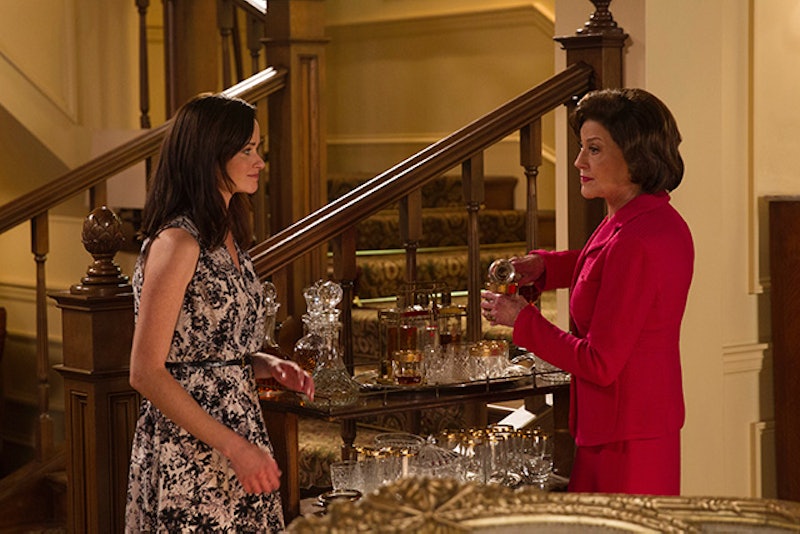 Gilmore Girls contained what is arguably the best mother-daughter relationship to ever grace our small screens, and in a TV landscape where shows tended to depict parents as either AWOL or nuisances, it was (and still is) amazing to see Lorelai and Rory double as best friends. But there's another mom on the show who is wonderful in a different way — Emily Gilmore. Emily deserves more credit than she gets, and her complex relationship with Lorelai made for some of the show's best moments. When the revival hits Netflix, Emily is one of the characters I'm most excited to see, even though something tells me I'll need to keep my tissues handy as I watch Emily navigate life without Richard. Who could forget the moment in Season 1 when she made him promise that she could die before him? Cue all the tears.

Some fans, though, might not be so happy to see Emily make a return. Emily is certainly a flawed individual — but, as many Gilmore fans have pointed out recently, Lorelai and Rory were far from perfect, too, and even had moments that made them downright difficult to like. Perhaps the reason Emily doesn't get the credit she deserves is because she's of a different generation than most GG viewers — so, while we understand Lorelai and Rory's flaws and moments of weakness, it's easy to dismiss Emily as someone who is simply elitist and judgmental. But, she's far more complicated than that, and here are seven reasons why Emily deserves more credit.

1. She Came Through For Lorelai

Emily may not have understood or agreed with Lorelai's life choices, but she was there when it mattered and she was proud of her daughter when it all came down to it. In fact, when Rory missed her mom's graduation because she'd impulsively hopped on a bus to visit Jess in New York City, the family members in the audience ended up being Richard and Emily.

2. She Stood Up For Her Family Members

Emily defended Lorelai every single time Christopher's father, Straub, spoke badly of her — and who could forget the time she left Shira Huntzberger speechless when she learned that the family had disrespected Rory?

3. She Did Her Best To Rectify Her Mistakes

Sure, a full apology would have been ideal — but we all know how hard it must have been for Emily to swallow her pride and tell Luke to go back to Lorelai. It also illustrated that she was devastated when Lorelai had stopped speaking to her and, at the end of the day, that mattered to her more than the social status of the man her daughter had chosen.

Emily only learned of Lorelai's engagement to Max when Sookie called to consult with her about wedding shower dates, which was clearly heartbreaking for her. Also, she literally gave Rory the world when she dropped out of Yale, only for her granddaughter to pack up and move without so much as a goodbye when she decided the arrangement no longer suited her. So, although she made her share of mistakes, Emily was often on the receiving end when Lorelai and Rory's decisions were less than admirable. Ultimately, she always forgave them and moved on, because she didn't want to lose either relationship.

5. She Tried New Things & It Was Adorable

Before you dismiss Emily as a culinary elitist, look back on the time she tried all sorts of new foods with Lorelai and Rory at the mall food court. In what scenario would Emily Gilmore eat food on sticks? My guess is, only in a situation that involved bonding time with her daughter and granddaughter.

6. Sometimes, Her Critiques Were Fair

No disrespect, Lorelai — I had the same sweats because the early 2000s weren't exactly the best time for fashion. But, sometimes, Emily made valid points in the most blunt (and hilarious) way possible. Speaking of which...

7. Her One-Liners Were Amazing

Lorelai wasn't always the wittiest one in the room.

Now, let's all give a toast to one of the most underrated moms on TV, Emily Gilmore.