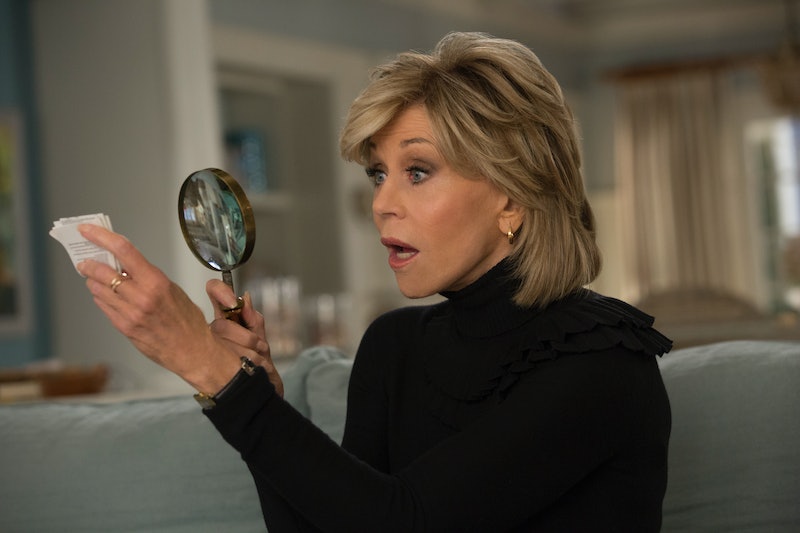 Grace spends most of Season 2 pining for Phil Milstein (The Ranch's Sam Elliott) and the feeling is mutual, but there's one major issue: Phil is still married to his wife Elaine, who has advanced Alzheimer's Disease. Unable to be with Phil without guilt, Grace turns to drinking too much to soothe her pain. In the season finale, newly deceased friend Babe leaves posthumous gifts for Grace and Frankie: Frankie receives Picasso paint brushes and gallery space, while Grace gets a big white vibrator ("It's better than drinking," Babe writes in the card). After some teasing, Frankie realizes Grace has never pleasured herself without the help of a man, but Grace decides to give it a shot for her post-Phil new beginning.

Later, Frankie finds Grace in the kitchen with a cramped and injured hand. Grace is coy about the nature of the injury, but soon Frankie figures out that Grace is "giving hand jobs to herself." When Grace's daughter Briana and ex-husband Robert notice her hand brace, Grace tells them her arthritis is acting up because she's doing "calligraphy." When Frankie and Grace talk at Bud's birthday parhty, Grace winces in pain and confesses to Frankie that her arthritis flared up within 30 seconds of her self-love, but she "played through the pain." Frankie doesn't laugh at her or shame her, but instead suggests alternative techniques and holds for the vibrator. "You know, I don't think they designed these things for older women," Grace says.

And that eventually gives Grace an idea, which she triumphantly announces during an argument which involves both families: She and Frankie are going to team up and make vibrators for women with arthritis. The kids are a bit embarrassed, but Grace and Frankie are proud of expressing their sexual needs. "Our blood doesn't flow as easily and our genital tissue is more delicate," Grace tells the families. "I did some reading. The more effort it takes to orgasm, the more you irritate it and the more it inflames your arthritis."

Most media portrayals of masturbation focus on the end result — how to get off, having orgasm, or being ashamed when someone walks in a person doing the act. But what I loved about Grace & Frankie's approach was that Grace was never ashamed that she was practicing self-love, but more coy about the fact that she never tried it. The issues she experienced do happen, but no one really talks about it or likes to admit it outside of anonymous internet forums. I think everyone should take page from Grace and Frankie — embrace your sexuality and sexual needs at any age, even if it gives you a hand cramp.