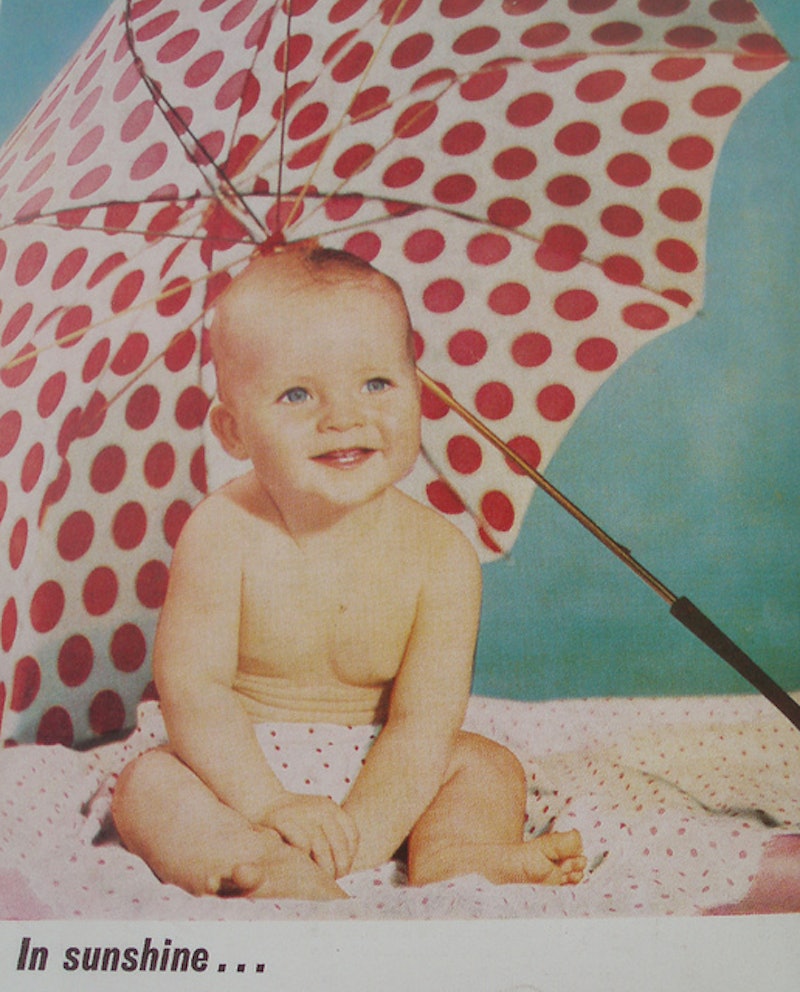 Perhaps because it's when most of our parents (or grandparents) were born, or perhaps because time is a flat circle and we are bound to repetition until eternity, baby names from the Baby Boomers are slowly creeping back in style. Here are 12 vintage baby names from the 1950s, because honestly, they are so cute, and sweet, and ugh, now I'm rethinking my whole imaginary baby name list. Thanks a lot, Baby Boomers. Er, parents of Baby Boomers. Whatever. Someone is to blame and it's not me.

Now, I'm not one of those people who idolizes a past time, especially the 1950s. There was a whole lot wrong then and there's a whole lot wrong now. However, the aesthetics that were popular during that era — clean, bright colors, nipped-waist silhouettes, letterman jackets — yas, yas, yas. And I'm including the popular names in my aesthetics rave, which we can peruse at our leisue thanks to the Social Security Administration's data on which baby names were in vogue during the '50s. So cute. So peppy. So... vintage.

Now, our generation (I'm a little spooked that it's my generation who is actively procreating, but hey, here we are) has a thing for old-timey, elegant names. Ava, Sophia, Isabella — very turn-of-the-century, wears-a-tiara-casually vibes. But names from the 1950s tend to be a bit more... sparky? Scrappy? Bright bursts of color-y? Delightful, definitely. And here are some of my favorites.

Not only is Josephine accompanied by a slew of precious nicknames — Jo, JoJo, Josie, Joey — it has been the moniker of choice for strong women throughout history. The inimitable performer Josephine Baker, Jo March from Little Women, and Empress Josephine Bonaparte, wife to Napoleon are just a few.

A name which means, simply, "king," Rex is a strong, bold choice for either girls or boys (though it's historically been more popular with male kiddos). Though its popularity in the 1950s can probably be attributed to Rex Harrison, star of such classics as My Fair Lady, I vote we bring it back now in honor of my personal favorite silver-screen Rex: Rex the sweet toy dino from Toy Story. Am I kidding? Kind of. Not really.

In keeping with today's fashion of picking elegant, old-school names, Lillian was popular at both the beginning and middle of the 20th century. Do I most associate "Lillian" with Lil and Phil from Rugrats? Yes, but I'm a garbage girl. Don't listen to me. Lillian is a beautiful name that a baby can grow into. Plus, Lil and Lily are both nice nicknames. Everybody's happy.

Though Perry was most popular in the mid 1800s, it experienced a resurgence in the 1950s, thanks at least in part to singer and TV personality Perry Como. Derived from Middle English, "Perry" means "dweller by the pear tree." Your guess is as good as mine as to what that is in reference to, but Perry is a cute name for either a boy or a girl. Or a pear.

Thanks to my obsessive watching of early America's Next Top Model, I reflexively say "Eva the Diva" in my head every time I hear the name (in reference to contestant/model Eva Pigford). And honestly, that's not a bad nickname to have. Though Eva, which means "life," has been in the top 100 baby names for girls since 2009, it's not nearly as popular as the similar-sounding Ava. And if you're anything like me, you'll go with the less popular name.

If you want your baby to be a movie dude, then naming him Wesley will put him in good company. Wes Anderson, Wes Craven, Wesley Snipes — all very cool movie dudes. Though Wesley hits its popularity peak at number 66 in the 1970s, it continues to hover around the #160 mark now, about the same as the 1950s.

June is a personal favorite of mine, and it's making me veeeeeery suspicious that it's been climbing the popularity charts over the past few years. June is yes, for the month, but the month of June is derived from the Roman goddess Juno (her Greek equivalent: Hera), protector, patron goddess of Rome, and overall badass.

Lee is such an elegant, classic and, I would argue, great gender neutral moniker. Lee means "pasture or meadow" (lovely!), is the name of actor Lee Page (dreamy!), and is unique enough to ensure that kiddo will probably be the only Lee in the class. A plus.

Why not name your child after a precious gem, huh? Or a Rolling Stones song? Or amazing, inspirational actress Ruby Dee? Though it's currently at number 86 on the list for baby American girls, Ruby is huge overseas: Number 10 in Australia, number 15 in England and number 22 in Ireland. Also of note: this is another new personal fave.

Apparently Russell started as a nickname for redheads, so if you have any of that finicky ginger DNA in your gene pool, you should definitely consider this name. Or just consider it anyway, because Rusty is the perfect nickname for Russell and I think that's the cutest thing ever.

I mean, hi, Audrey Hepburn remains the arbiter of elegance for a good proportion of our generation, plus Audrey is just a beautiful-sounding name. Audrey means "noble strength," (Audrey is queenly, am I right?) and is currently situated nicely at number 37 for baby girls.

I don't know what it is about our generation's collective warming up to names that sound like they belong to our grandmothers, but I'm happy to hop on board. Rosemary means "dew of the sea," and the plant is a sign of faithful lovers. So cute. Plus Rosemary Clooney, smooth AF crooner and aunt to George, is not a bad human to name your kid after.