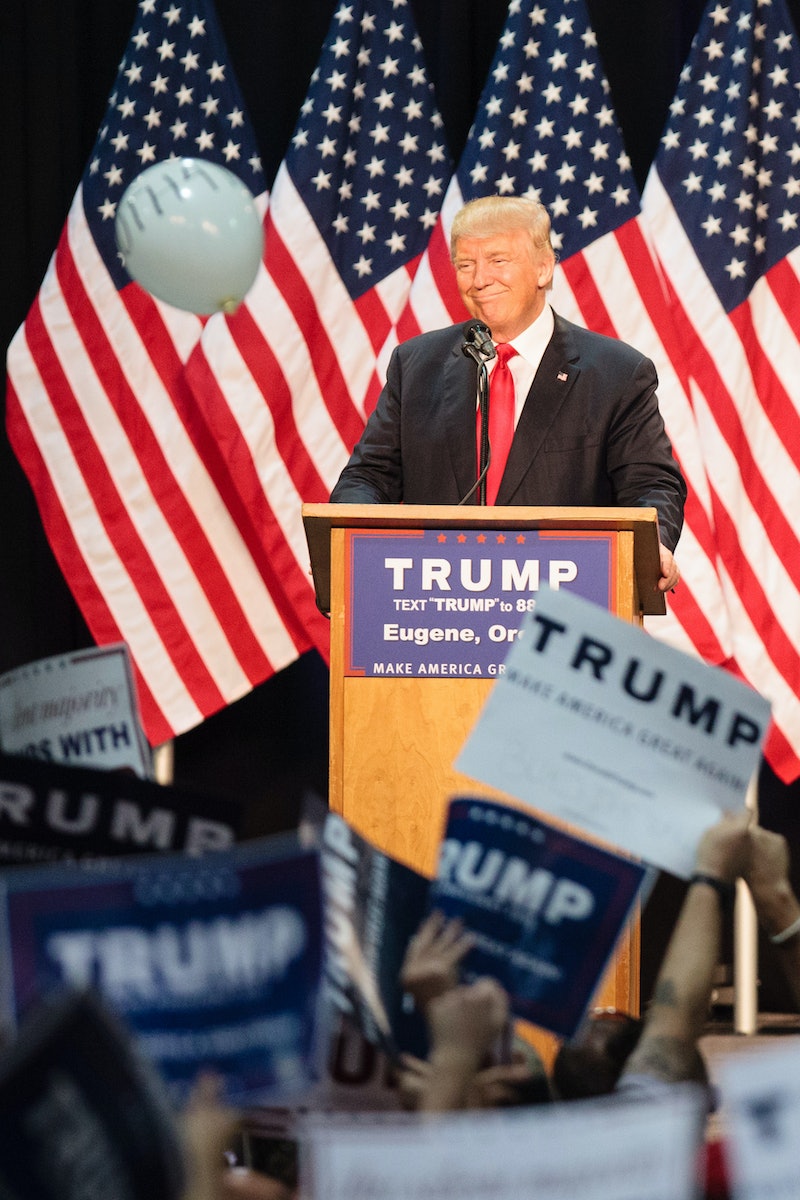 We've all read about the massive amount of free media coverage Donald Trump has received in 2016. We've devoured story after story about everything from his family to his family scandals. Likely, you're reading about the Donald in the digital media (oh hey), so it may come as a shock when you learn the number of books the likely Republican candidate has authored — according to Goodreads, 55.

And, while a dozen or so of these author credits are for things like prologues to the Belleza Universal, the Italian-language guide to the Miss Universe pageant, a good 30 of those titles are Trump's own doing. In fact, there's an entire series with titles that begin Trump: (i.e., Trump: The Art of the Comeback and Trump: Surviving at the Top).

No matter how you're feeling about the primaries or the impending election, one thing is certain: we'll be hearing a lot more about Donald Trump. Trump isn't about to exit the political conversation any time soon, especially in this in era of 24-hour news cycles. Want to get an edge on the competition at Trump Day Trivia? Check out these seven books by the Donald.

1. Why We Want You To Be Rich: Two Men, One Message

Does Trump look like Hansel from Zoolander on this cover? In this volume, Trump teams up with Roburi Kiyosaki, famous for founding the Rich Dad money management enterprise. Words from the Donald that don't bode well for a future presidency:

"People who are capable of thinking for themselves will rarely be part of any herd."

2. Think Big And Kick Ass In Business And Life

Donald the author likes adjectives of size as much as Donald the candidate. He offers some serious wisdom about luck in this book:

“Luck does not come around often. So when it does, be sure to take full advantage of it, even if it means working very hard. When luck is on your side it is not the time to be modest or timid. It is the time to go for the biggest success you can possibly achieve. That is the true meaning of thinking big.”

For a second I wondered if it was politically correct to use the word "crippled" — and then I remembered who was talking. Deep wisdom?

“If you have laws that you don't enforce, then you don't have laws. This leads to lawlessness.”

4. Trump Never Give Up: How I Turned My Biggest Challenges Into Success

The punctuation of this title poses many questions. Should there be a colon between Trump and Never? A comma? (In which case, perhaps "Trump, never give up" is a particularly resonant message Donald received?) Is this a bit of third-person, caveman speak? ("Trump never give up. Trump make profit.") We just can't be sure. Fortunately, who needs a clear title when a book contains such incisive insights as:

"It's easy giving up, and that's exactly what losers do."

Trump's first cover makes no bones about its focus — its soft focus of what appears to be Central Park. This bestseller from 1987 lays out a strategy we all know and (maybe don't) love:

“The point is that if you are a little different, or a little outrageous, or if you do things that are bold or controversial, the press is going to write about you.”

6. AIDS In America By Susan Hunter

7. Trump: The Best Golf Advice I Ever Received

If you're not into televised sports, at first glance this cover may appear to be depicting its author wielding a baseball bat. Upon closer inspection, the many nuances of this book design reveal themselves: the Print Shop quality frame around the photo, the money-green background tone, the beam of light gleaming through Donald's poufy ducktail. Trump writes the introduction to this collection of tips from golfing pros, and he leaves readers with a kind note:

More like this
25 Spell Books For Every Type Of Witch
By K.W. Colyard
10 Must-Read Books Out This Week
By K.W. Colyard
5 Gripping Books To Read From Women’s Prize For Fiction Winner Ruth Ozeki
By El Hunt
16 Novels That Paint A Realistic Portrait Of Abortion
By K.W. Colyard
Get Even More From Bustle — Sign Up For The Newsletter