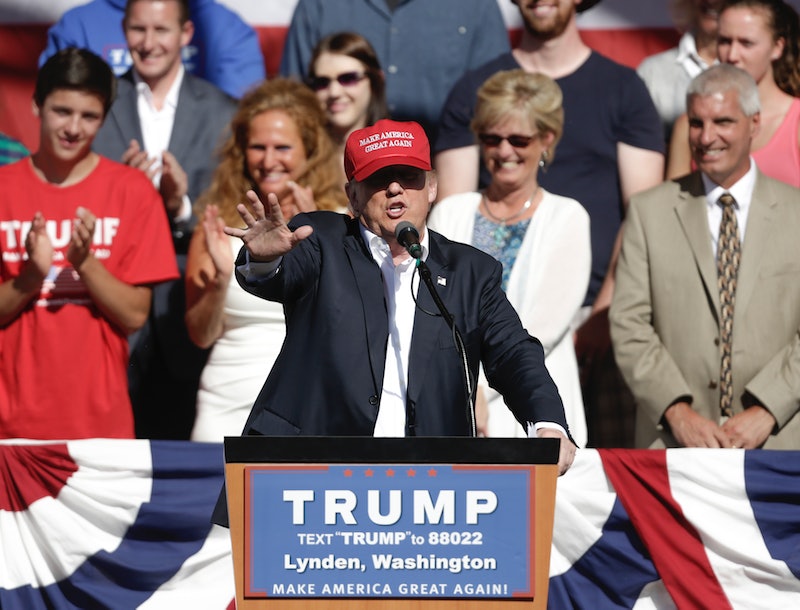 On Monday, BuzzFeed's Andrew Kaczynski uncovered video of a 2005 lecture by Donald Trump biographer Robert Slater, in which he revealed that Trump removed biographical details from Slater's 2005 book, No Such Thing as Over-Exposure: Inside the Life and Celebrity of Donald Trump .

Slater, who passed away in 2014, says Trump asked to preview his biography before it went to the printer. Although that is not standard practice, publisher Pearson agreed to the request, because the mogul intended to buy a large number of copies to sell in Trump Tower. After reading, he asked that two changes be made.

The first involved the excision of an anecdote about Trump's 1999 divorce from his second wife, Marla Maples. Instead of telling his wife that he wanted to divorce, Trump called the New York Post, and presented the newspaper's write-up to Maples.

Trump gave Slater that juicy tidbit personally, during a flight to Chicago. The biographer called it "the greatest anecdote’s anybody ever told me," and asked Trump to let him keep it in No Such Thing as Over-Exposure. He refused, and Slater removed the anecdote, but referred to the alteration as "a very heavy price" he paid by "show[ing Trump] the book."

Later, when Trump gave a sneak peek of the biography to friends at his wedding to Melania Trump, the attendees convinced him that he looked fat in the image Pearson had chosen for the cover. Slater relayed the message to the publisher. Although Pearson was preparing to print the first run of the Donald Trump biography, it pulled back and changed the cover image to one the subject considered more flattering.

Satisfied with Slater's book, Trump bought a large amount of copies. Trump Tower continues to stock and sell No Such Thing as Over-Exposure. The mogul also helped Slater score an interview with Don Imus, which the biographer seemed happy about.

But, ugh, seriously, is it any surprise that Trump knows Imus?

More like this
The 20 Best Audiobooks To Fall Asleep To
By Aoife Hanna and K.W. Colyard
Thank U, Ex
By Rosemary Donahue
Watch The Emotional Trailer For Dolly Alderton’s 'Everything I Know About Love'
By Bustle UK
At 28, Minnie Driver’s Personal Life Was “Falling Apart”
By Kate Dwyer
Get Even More From Bustle — Sign Up For The Newsletter