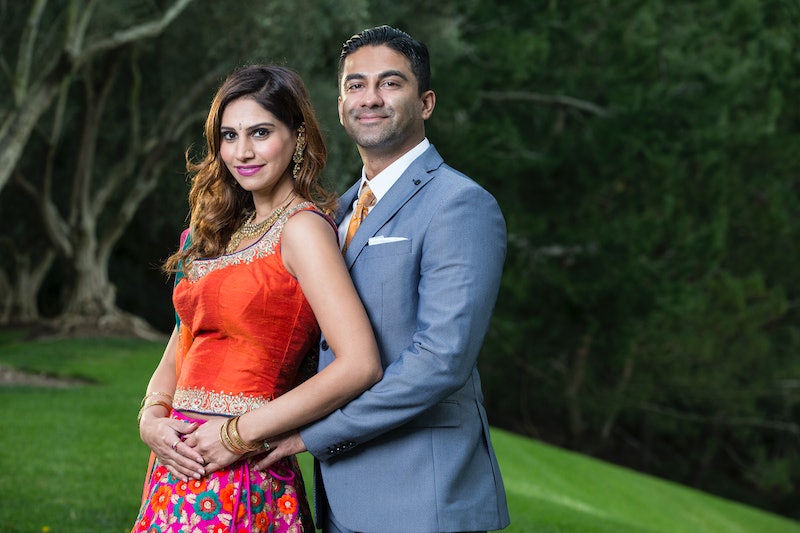 The couples at the heart of FYI's Arranged range in age, culture, and location, but all three pairs have a key element in common: They didn't meet by chance. All three pairs were set up for the explicit purpose of forging a marital connection, and the show seems devoted to unpacking whether or not "arranged" marriages are inherently doomed. So, as the show embarks on Season 2, are any of the Arranged couples still together? If you exclusively believe in love at first sight, I hate to break it to you, but, at least when it comes to these pairs, it seems that a less spontaneous connection can still spark true love. For these people, their relationships are still going strong months after the show taped and, in some cases, years after their marriages.

In some of these cases, an external element led the central pair to be open to an arranged marriage, be it religious beliefs or cultural traditions that involve family members in the dating/engagement period. Many of these couples never even spent a significant amount of time alone before getting married. Others had a less restricted dating period, but were originally introduced and set up by someone else. Whatever the journey, these couples are finding ways to make their marriages last.

The Orthodox Jewish traditions that Ben and Vicki ascribe to prevented them from touching or even being alone together before they were married. According to FYI, the two both made the choice to adhere to these traditional practices — rather than being encouraged by their families — so they seemingly easily overcame the hurdles of an arranged marriage in order to stay together.

Maneka's Indian family wanted her to have an arranged marriage, but she originally married for love. However, when that marriage fell apart quickly, she allowed them to set her up with Mayur. And, the pair is still together and happy so far, according to their frequent Facebook pics together.

These two were introduced by David's brother, but had a long distance relationship for a while before meeting in person and planning to get married. So, the question with these two is whether or not they can accurately translate the intimacy of their online relationship into physically living together, especially with David's mother being totally against the marriage. But, according to an interview Taylor gave to the International Business Times, their marriage is still going strong — despite the family drama.

This couple were set up as teens, in accordance with their Romani traditions, and are raising their teenage son in the same tradition. And, their marriage is still going strong, decades after they were arranged to marry one another.

Meghan and Josh were set up by their families and even though they had some worries about whether or not they were going to be able to get along in their new lives in South Carolina, but they successfully made it over the hump and are still together, as evidenced by this cute IG pic.

When Christian and Maria were arranged to marry, they were still teenagers, who normally don't form lifelong romantic commitments. But, with the example of Michael and Nina, Christian's parents, to guide them, these two are still together. And now, Maria and Christian are so close, they even share a Twitter account.

Ragini and Veeral's parents are the ones who set up their connection, as is typical for many East Indian families like the ones they grew up in — that's what most people imagine when they think of arranged marriages. But, while those same people might think of arranged marriages as loveless or lacking in chemistry, these two seem just as intimate as any couple who met at a coffee shop or in a college class. And, they also share a Twitter account, which must be a sign of true love.