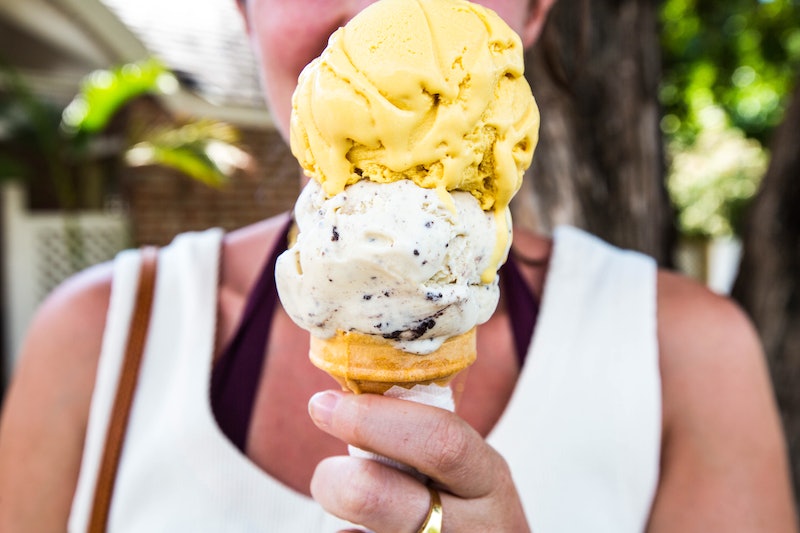 Are you lactose intolerant? If you answered "no" but hesitated slightly, there are a few reasons for you to look again. Lactose intolerance, or the inability of the body's digestive system to break down the sugar named lactose that occurs naturally in dairy products, is more complex than it looks. For one, it's not an allergy; it's a consequence of low or absent levels of an enzyme called lactase, which is usually produced in the small intestine and is designed to break lactose down for digestion. It's often misdiagnosed, has a huge range of severity, and can be trickier to pinpoint on your own than just "not eating cheese for a week". And while it's also not life-threatening, it does make life a bit upsetting until you get a proper diagnosis. There may be some symptoms or signals of lactose intolerance that you've overlooked.

Lactose intolerance actually comes in a variety of forms. Some lactose problems are inherited; you can have primary lactase deficiency, where low levels of lactase manifest at a very young age, or congenital lactase deficiency, which shows up at birth and means you have no lactase at all. It can also develop as a result of some kind of gut infection or disruption (which is called secondary lactase deficiency), like Crohn's disease or surgery. But most of the time, it's something that happens as people age and produce less lactase in their small intestine.

So if you've previously considered and then dismissed lactose intolerance without getting properly tested, it may be time to give it a second look. Yes, it may be agony to bid farewell to cheese, but your health is more important than brie. Yes, really.

1. You Often Feel Bloated Or Sick After Meals

The condition of lactose intolerance, or lactose malabsorption, is obviously triggered when something containing lactose is ingested, and that's when the fun really starts. If your small intestine has stopped producing enough lactase to cope with lactose's sugary demands, you'll suffer from the after-effects of a meal containing lactose: the Mayo Clinic names nausea, bloating, abdominal discomfort, diarrhea, cramps, and gas as some of the possible array of symptoms that might follow.

However, it's important to remember that, as we discussed earlier, lactose intolerance has different forms, and that symptoms aren't uniform. Some people, for instance, get everything up to and including itching around their anus, while others only experience mild abdominal pain or a general grumbling in the gut or chronic constipation. If you've been dismissing your symptoms because you believe that lactose intolerance only turns up in its most extreme form, you may be missing something; mildly lactose-intolerant people can handle a little bit of lactose in their diet without too much consequence, but they still have a lactase problem.

2. You've Suspected IBS In The Past

Irritable bowel syndrome, or IBS, can occasionally be similar to lactose intolerance in terms of symptoms. It's also responsible for cramping, pain, gas, abdominal nightmares, and general annoyance in the digestion area; but unlike lactose intolerance, which is due to a precise lack in the body's enzymes, IBS is a bit harder to pin down. It's basically sensitivity, and that lack of simplicity (and the difficulty of diagnosis) can mean that people think about it first rather than immediately leaping to blame the ice cream. (It's a problem for more than just the lactose intolerant; an expert commented to the Huffington Post last week that ovarian cancer symptoms are often mistaken for IBS, too.)

If you've done some poking around a potential IBS diagnosis and haven't gotten anywhere, lactose intolerance may be the real culprit. Mention it to your doctor if you think it's possible and they haven't raised it as a potential problem.

Reclaim Your Life From IBS, $10, Amazon

3. You Get Symptoms From Food That Doesn't Seem Dairy-Like

If you've thought about lactose intolerance but eliminated it as a possibility because you seem to get symptoms from food that doesn't seem to be from a cow, think again. The array of foods with "hidden" lactose, or lactose that isn't immediately apparent, is actually pretty large. Beyond cheese, butter, and cream, there are certain breads, cake, dressings, processed meats, peas, breakfast cereals, and soups that could have dairy hidden in the ingredients.

The simple problem with lactose intolerance is that dairy pops up very frequently throughout the Western diet, and can be exceedingly difficult to track. If you'd put it out of your mind because your gastro-troubles seemed to come on at random intervals, follow them more carefully and do research into the lactose potential of the food before you eat. You may come to a different conclusion.

Because of the aforementioned lactose-is-everywhere problem (OK, it's not, but it's certainly in places you might not expect), if you've tried an elimination diet on your own before — taking out everything with dairy involved — and not had much success, it may not have been a proper scientific test. There's also the degree problem; as MedicineNet points out, lactase deficiency can be mild, moderate, or severe, and whether a simple "no milk/cheese/yogurt" elimination diet did any good will have depended on how severe your case is. If you're on the severe end, hidden lactose packs more of a kick, and it'll be difficult to do an elimination-diet test without nutritional supervision.

If you don't want to deal with an elimination diet, there's a much simpler test available to you for diagnosis: the hydrogen breath test, which will be done by your GP. You'll be asked to avoid any lactose for a few weeks, then drink something heavily dairy-laden and have the amount of hydrogen on your breath measured immediately afterwards. Lactose that isn't being properly digested in the colon ferments instead, and produces high hydrogen levels that emerge in the breath. If you've got more hydrogen in you than the Hindenburg, we may have a culprit.

5. You're From A Hispanic, Jewish, African, Or Asian Background

Your genetics, and specifically your ethnic background, may play a very big role in your risk of lactose intolerance. Up to 80 percent of Hispanic communities may have it, while a 2010 survey of the phenomenon in ethnic groups around the world found huge diversity across different bits of the world: between 90 and 100 percent of people of East Asian descent had lactose intolerance, and it was nearly as dominant among Native Americans, Central Asians, and people of African ancestry. In the Ashkenazi Jewish community, your likelihood hovers at around 60 to 80 percent. Even if you've never considered yourself a candidate, the fact of your ancestry may mean you're more vulnerable, or have more of a sensitivity than you realize.

These days, being lactose-intolerant isn't the end of the world. As we've become more aware of the condition and how widespread it is medical knowledge has become more widely available, and there's plenty of other ways to get the right amount of calcium and vitamin D (two things dairy provides) with the least amount of discomfort. Don't worry or catastrophize; get a GP to check you out.