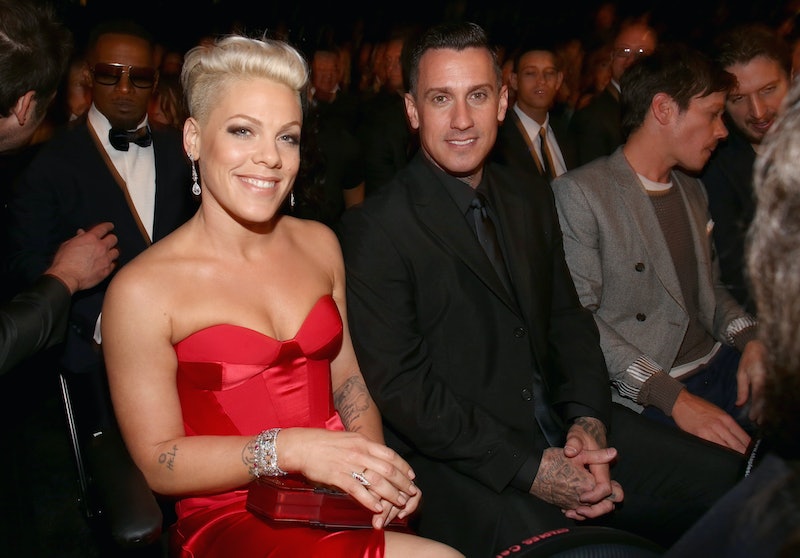 Get ready for your daily dose of cute, because Pink’s latest video for “Just Like Fire,” a song off of the Alice Through the Looking Glass soundtrack, stars her whole family. And trust me when I say that it’s super adorable. The singer included her whole family in her latest musical project. The video features Pink’s husband, Carey Hart, and her adorable daughter, Willow, and it’s one of the cutest projects the singer has ever produced.

Known for her over-the-top videos and intricate performances, the fact that Pink involved her whole family for this song is so incredibly touching. Especially considering that she and husband Carey Hart recently celebrated their 10-year anniversary together. Hart posted a picture to Instagram in January, sharing his love for his wife and their daughter after celebrating their tenth wedding anniversary together. I think it’s wonderful to see a Hollywood family not only continuing to love each other, but to involve each other in their professional and personal lives. I can only imagine what a fun shoot this video must have been to have Carey Hart and Willow with her on the set.

Thrust into a world of wonder, Pink and Willow spend almost four minutes gallivanting through Alice’s magical world on the other side of the looking glass. There’s a mad tea party, an evil queen, and more over-the-top costuming than even the most bizarre dreams. But the best part about the whole thing is definitely Pink’s daughter Willow, who looks absolutely delighted to be playing a young Alice. She kicks excitedly at the tea party table as all three of the attendants are suspended in the air and is the first to walk bravely through the mirror and looks like her mother’s twin with her pink dyed hair.

Really the whole thing is adorable. With Carey Hart offering her a cup of tea at the beginning and then haplessly checking his crazed wife into an institution at the end, this family proves that they are 100% family goals.