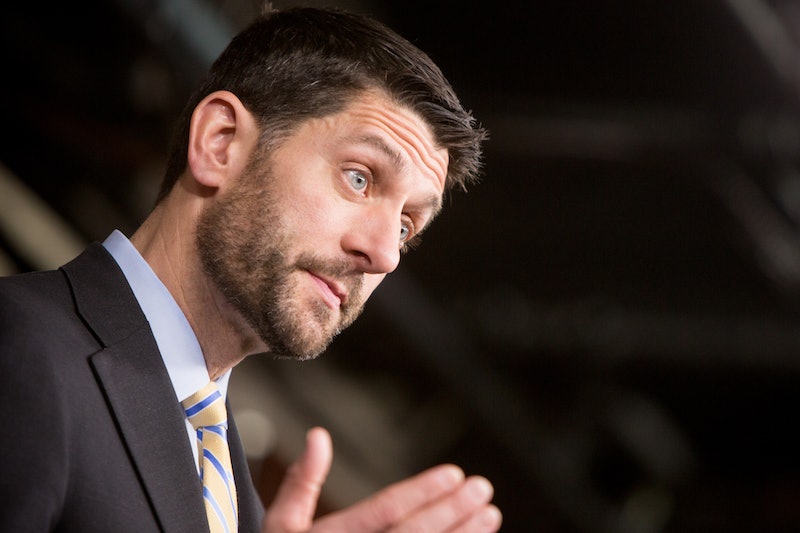 Tensions between the presumptive Republican presidential nominee and the Republican Speaker of the House have escalated over the last few weeks, and they’re showing no signs of winding down. Most recently, Donald Trump threatened to have Paul Ryan removed as the chair of the Republican National Convention — and Ryan said that was okay with him. What’s going to happen with Ryan and Trump, and how will that affect the GOP’s chances in 2016?

It’s very hard to say, because a dispute of this intensity between a party’s likely presidential nominee and its congressional leadership is basically unprecedented. Ryan said earlier in the week that he wasn’t ready to support Trump as the nominee. In response, Trump said that he wasn’t ready to support Ryan’s agenda as Speaker. Trump lackey Sarah Palin is supporting Ryan’s challenger in his home district's primary, and now, Trump might actually boot Ryan from the convention altogether. But there’s more going on here than just a petty dispute between Trump and Ryan. This is a microcosm of the civil war that’s raging inside the Republican Party.

On the one side, there are the angry grassroots insurgents led by Trump. On the other, there’s the moneyed class of establishment Republicans, of whom Ryan is the de facto leader. It is, to use a phrase that’s become a cliche, a battle for the soul of the Republican Party.

So can the two make amends and save the GOP? This is the million-dollar question right now, and while it would be premature to predict anything too confidently, it seems unlikely that there will be any substantive or permanent reconciliation between Trump and Ryan. This is because at the end of the day, Trump and Ryan have mutually exclusive political goals.

Since assuming the speakership, Ryan has made it clear that he wants to use his position to craft and chart the Republican Party’s policy agenda going forward. He’s also said on several occasions that he unequivocally opposes several aspects of Trump’s candidacy, including his support for blanket deportation of undocumented immigrants, his proposal to ban Muslims from entering the U.S., and his reluctance to denounce white supremacist groups. And there are many, many other arenas of policy on which Ryan and Trump are diametrically opposed.

Trump’s goal, of course, is obvious. He wants to win the presidency. But while he’s willing to do a lot of things in order to accomplish this, he’s shown no willingness to tone down or moderate his rhetoric in the slightest. It’s true that he has backtracked on a couple of low-profile policies, but he hasn’t budged an inch on the most odious ones, and those appear to be what bother Ryan the most.

How is it possible to reach common ground in a situation like this? I don’t think it is. Trump’s chances of becoming president are already slim, but they’ll become a whole lot slimmer if he demolishes his entire brand by kowtowing to Ryan, apologizing for his offensiveness and backing off of his trademark policies.

But disagreement over these policies, and well as opposition to Trump’s general tone, appear to be at the heart of Ryan’s reservations. It’s also worth noting that Ryan claimed not to even want to be Speaker to begin with and plans to leave Congress entirely within a decade, so he doesn’t have much incentive to subjugate his deepest values in the name of party unity. But who knows? This situation is unusual enough that it’s really impossible to guess how it will resolve itself. We’re in uncharted territory here, folks.