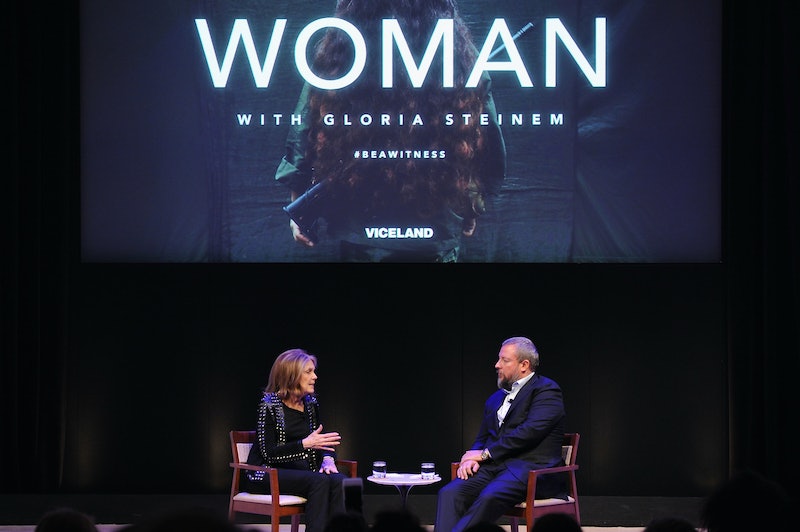 As the host and executive producer of Viceland's new docuseries WOMAN , Gloria Steinem introduces the premiere episode by emphasizing the message that "the greatest indicator of the world’s stability, wealth, and safety is the status of women.” The 82-year-old activist and writer has traveled the world throughout her entire life and seen firsthand that confronting problems dismissed as "women's issues" is a crucial component of addressing the biggest dangers of the 21st century. But, after introducing the series, Steinem steps aside from the screen and Viceland's impressive WOMAN reporters take over. The series' unique reporting style places a strong focus on the correspondents' reactions — something that traditional documentarians may very well balk at — and brings emotions and facts together in a new and hugely impactful way.

In the May 10 premiere episode, 29-year-old Isobel Yeung travels to the Democratic Republic of Congo to cover the country's epidemic of sexual violence. As she interviews victims, doctors, and activists, Yeung always remains professional and focused on gathering the facts — but she doesn't pretend that these atrocities don't have an emotional impact on her. The camera frequently shifts back to Yeung to capture her reactions. Her empathy is clear throughout the episode and viewers see tears in her eyes during one of the most heartbreaking moments — Nobel Peace Prize nominee Dr. Denis Mukwege tells the mother of a six-year-old rape victim that her child may require genital reconstructive surgery due to injuries from an attack.

While having an emotional reaction to the story Yeung is reporting is not something that only women can understand — simply being a human with eyes and a heart will do — Steinem did seek out an all female reporter crew very deliberately (she's "putting the V in Vice" as she told the crowd at the film's Ford Foundation premiere).

In an interview with The Daily Beast, Steinem explained why she chose only women journalists and why the series focuses so heavily on their emotions:

"Each of them has a lot of international experience and each of them is part of, like, this new form of interviewing. They don’t pretend to not care... It might even be almost an innovation, that they are being objective—that is they are not trying to influence the answers—and they are also being human beings, who are witnessing reality at the same time. They’re not pretending not to be affected."

As viewers learn in the premiere, over 1.8 million women in the DRC have been sexually assaulted. Brutal gang rapes account for many of these assaults and the victims are often physically tortured, mutilated, and burned. They are then shunned from society, along with the children they bear as a result of the rapes. Hearing this staggering statistic is already so upsetting and seeing the victims and putting a face to the suffering brings even more of an emotional impact. This is a strategy used by many documentarians, but WOMAN takes that strategy further, allowing the onscreen presence of the reporter to connect with viewers on a deeper emotional level. When she hears this for the first time, firsthand, so do we.

In a sense, the correspondents double as emotional communicators. “This way of doing it is the closest thing I know to actually being there yourself, and being a witness,” Steinem said at the Ford Foundation's premiere of WOMAN, to a crowd that included Jennifer Lawrence, Meryl Streep, and former New York Times Editor Jill Abramson.

The reporting style is a tremendous success, but of course, nothing can compare to the experience of physically being there. Still, WOMAN does make viewers feel like true "witnesses," as Steinem puts it, in a unique, incredibly moving way. It's incredibly jarring and difficult to watch these stories from our couches, so these reporters deserve our thanks and appreciation for traveling all over the world in order to gather difficult images and interviews that educate us. WOMAN has allowed us to be witnesses to issues that are too often overlooked, and all that's left for us to do is use that experience to make a difference in any way that we can.