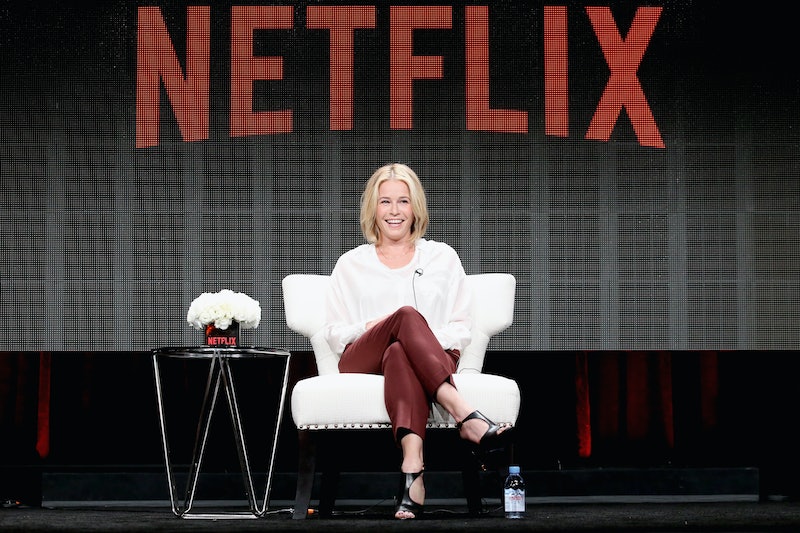 After finishing an entire Netflix series, one can become filled with sadness, already missing something that often didn’t even exist 48 hours before and waiting for it to return. However, if you are still grieving Chelsea Handler’s Netflix docu-series, Chelsea Does, you’re in luck, because Chelsea is back with a new format. Her aptly titled new Netflix talk show Chelsea is the first of its kind for the streaming service, as multiple new episodes will become available each week. So, what days will Chelsea be on Netflix?

The series' premiere on Wednesday, May 11 will kick off the three-day-a-week series with new episodes hitting Netflix on Wednesday, Thursday, and Friday each week. And, if this innovative online platform isn’t enough, the talk show’s formula will also be different from the usual white-guy-behind-a-desk in Los Angeles or New York. (No offense guys, but you have to admit, there’s not a lot of racial or gender diversity in late night talk shows.) Chelsea will air in 190 countries and the trailer for the series depicts Chelsea taking her international program on the road for different segments. She is teased to be in Russia, Mexico, Japan, Spain, and at home in the U.S. And, in typical Chelsea Handler fashion, she isn’t shying away from adventure on her travels. She jokingly tells people in another country that she is Oprah, hangs out with Diego Luna, totes a Donald Trump piñata, and goes to a polygamist’s house for dinner, who honestly isn’t that into her.

“You mentioned adding a third wife, like somebody like me?” she asks him in the show’s trailer.

He responds awkwardly, “I’m sure you have your own strengths that you would bring.”

Whatever and wherever Chelsea is getting into trouble, you can find her on Netflix on Wednesdays, Thursdays, and Fridays. So, who will Chelsea’s first guests be in her inaugural week? Here are all of the guests slated to appear on Chelsea’s first three shows, as reported by Variety.

The lineup for the premiere episode includes Drew Barrymore, Pitbull, and U.S. Secretary of Education John B. King.

With such varied guests and teased adventures, I can't wait to see where Chelsea takes us three nights per week this season on Netflix.