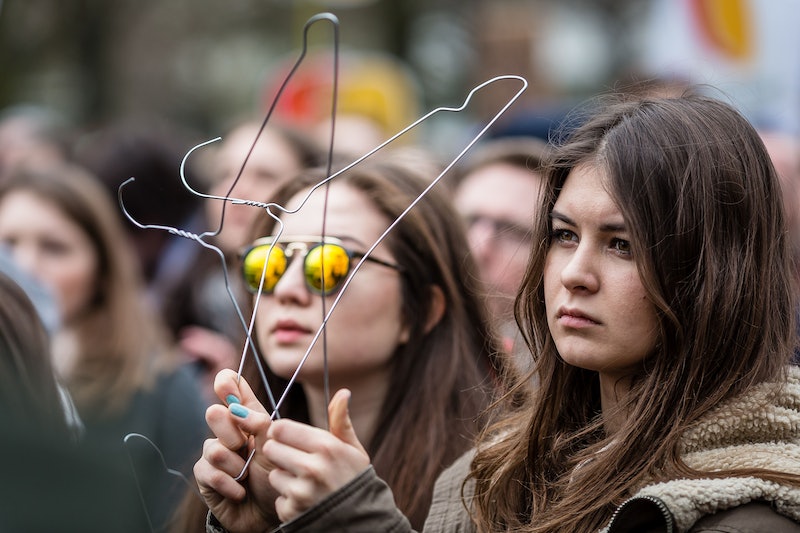 I enjoy the much-needed, completely earned vacation as much as the next working person. I also enjoy safe and affordable access to reproductive health services — I am one of the 35 percent of American women who have had an abortion by the time they’ve turned 45. I got lucky: there was a Planned Parenthood located just a few blocks away from my home when I terminated my pregnancy, and the state I reside in (Washington) doesn’t require mandatory waiting periods for women seeking abortions. I left work early on a Friday, walked into a clinic free of angry protestors, and left a few hours later; the entire procedure, from the time I entered the clinic to the time I put a heating pad on my abdomen from the comfort of my home, took only a few hours, and cost me $200 and zero days of missed work. Sadly, a growing and alarming number of women across the country — who must travel so far to terminate their pregnancies that some have begun to refer to these trips as "abortion vacations" — cannot say the same.

More than 200 abortion restrictions have been enacted since 2011, closing abortion clinics and implementing condescending laws — like waiting periods, which not-so-subtly suggest that if a woman is given time to think over her decision, she will change her mind (a 1981 survey of women who had experienced abortion clinic waiting periods found that 70 percent of patients could not name a single benefit to enduring the waiting periods). These regulations are called Targeted Regulation of Abortion Providers, or TRAP laws, and they are wide-reaching — for example, more than 60 percent of American women live in an area with an abortion waiting period.

As a result, many women are forced to travel great distances to get abortions, which requires as much logistical planning (and generally much more money) than it would to go on an actual vacation. According to a 2008 Guttmacher Survey, 16 percent of abortion patients were forced to travel 25-49 miles, 11 percent traveled 50-100 miles and 6 percent had to travel more than 100 miles in order to terminate.

And in states with mandatory waiting periods and counseling, women are twice as likely to travel great distances to obtain a legal procedure, as 74 percent of women living in rural areas travel more than 50 miles to access abortion care. Nearly a third of rural women are forced to travel more than 100 miles. In Utah, for example, 97 percent of the state's counties do not have access to an abortion provider. The state requires a mandatory 72 hour waiting period, meaning that a woman may not only have to travel hundreds of miles to receive reproductive healthcare; she will also have to pay for a hotel, miss out on work, and wait for her state government to tell her that she’s spent enough time twiddling her thumbs before she carries out a decision she has already (thoughtfully and responsibly) made.

This new travel phenomenon is best illustrated by a sadly realistic video produced by Lady Parts Justice, in which a young woman seeking an abortion in Utah is faced with three choices when searching for a safe and semi-affordable abortion clinic. The closest provider to her is an incredible 200 miles away, and the 72 hour waiting period would mean she would have to miss work and pay for a hotel, on top of the necessary abortion costs. She thinks about going to a clinic in Colorado; there are no mandatory wait periods in the centennial state, and protestors are required, by law, to stay 100 feet from a clinic — but the Colorado provider is an intimidating 500 miles away. She then thinks about a clinic in Mexico City, although she isn’t sure if she wants a “destination abortion” in another country where she doesn't speak the primary language.

These are the horrific, unnecessary choices that more and more women are forced to make when they decide to end an unwanted pregnancy. In Mississippi, Missouri, North Dakota, South Dakota, and Wyoming, there is only one available abortion clinic open in each respective state, forcing women to travel an untold number of miles, pay for gas and lodging, pay for meals, pay for their abortion, all the while losing billable hours at their jobs. Of the three in 10 women will have an abortion before they turn 45, 61 percent have one or more children, so childcare becomes a forced necessity as well. Mississippi law requires a 24 hour waiting period between the initial appointment and the actual procedure, and in Missouri, a woman must be put through mandatory counseling during her 72 hour required waiting period. With limited or non-existent public transportation to connect major cities within many of these states, traveling to the lone clinic in order to terminate a pregnancy becomes even more difficult, more expensive, and more out of reach for a growing number of women, especially women of color and women of low socioeconomic status.

Basically, what a woman would have to pay for an extended trip away from home — in both upfront expenses and missed wages — she is now being forced to pay to obtain a completely legal and common medical procedure.

Some clinics are attempting to fight back, like carafem, a Washington, D.C. based health center that just opened up a clinic in Atlanta. While the Atlanta health center is still shackled to certain TRAP laws — like a mandatory waiting period, something the Washington center does not have to abide by — it offers a 24-hour appointment line, so women can schedule an appointment whenever it is most convenient.

And in the wake of increased anti-abortion legislation, non-profit organizations that specifically allocate resources to assist women in obtaining legal-yet-far-away-reproductive healthcare are becoming more and more prevalent. The Women's Reproductive Rights Assistance Project will assist women financially, paying for the unnecessary expenses accrued when traveling great distances to obtain legal abortions. So will the National Abortion Federation and the National Network of Abortion Funds, which was established in 1993 and now has nearly 100 abortion funds across the United States, Mexico, Canada and the UK. This online national network allows women to search abortion funds by state, finding assistance from coast to coast, like ACCESS Women's Health Justice in California, and the New York Abortion Access Fund, in New York.

I’m one of the lucky ones; one of the few that live in a liberal state, dedicated to ensuring that women are free to make their own choices about their own bodies. Others aren’t so lucky. Others are oppressed by unnecessary yet somehow lawful burdens, forced to give birth because abortion providers are too far away or financially out of reach. As more and more unnecessary abortion restrictions are passed in an attempt to police women’s bodies, so-called "abortion tourism" will become increasingly more common and more necessary. Stories like mine will disappear, and stories like that of the woman featured in Lady Parts Justice’s video may force us all to ask a woman when she takes a vacation, if it’s for business, pleasure, or reproductive freedom.