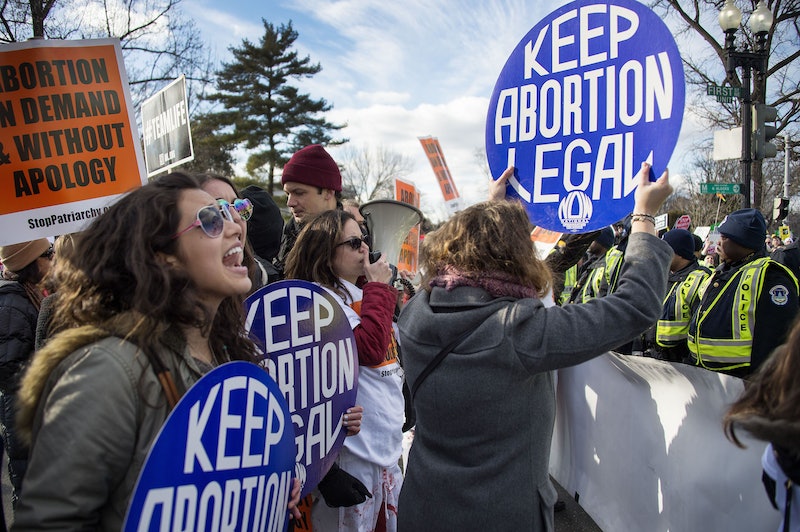 You may know that today is the 43rd anniversary of Roe v. Wade, the landmark legal case which protected American women's legal right to abortion. You may also be aware that, despite the fact that Roe still stands, not all women have an easy or simple time exercising their reproductive rights. Laws that require doctors to perform medically unneeded sonograms or recite medically incorrect "information" about abortions, waiting periods that place incredible burdens on women seeking abortion (especially those with care-taking responsibilities, jobs that offer no time off, or homes located far away from clinics), and insurance plans that refuse to cover abortions are just a handful of the obstacles that many of the 1.2 million American women who have abortions each year must contend with. And even with sliding payment scales, paying for an abortion is simply beyond the reach of many.

But you may not know that there are grassroots, volunteer-run organizations all over this country working to support women seeking abortions, and fight these obstacles on the ground floor — organizations called abortion access funds. Abortion access funds collect money from donors and then use it to directly help women pay for procedures, transportation, and any other cost that might otherwise put the abortion that they want to have out of their reach. They work to make sure that no woman is unable to make the choice she knows is right for her, simply due to lack of funds. They draw attention to a fact that is often lost in popular debates about reproductive rights: the financial barriers to abortion can sometimes be even more harmful to women than the legal barriers.

What Do Abortion Funds Do?

So how exactly do abortion funds help women exercise their right to choose? By helping out with covering the actual price of getting an abortion. Though the financial burdens of abortion get little media coverage, they are very real: According to a 2009 review of research conducted by the Guttmacher Institue, reported on in Pacific Standard, 18 to 37 percent of women receiving Medicaid who wanted to have an abortion instead gave birth due to lack of funds (Medicaid covers abortions in very few circumstances).

Abortion access funds exist to help women struggling with these issues. As Joséphine Kabambi of the Women’s Medical Fund explained,

For example, in Philadelphia, the average cost of a first trimester abortion is $400. Last year, the average income of [people who contacted our abortion fund] was $564 a month. The work that we do helps to make the 'right' to have an abortion a reality for people struggling to make ends meet.

Over the last year, Women's Medical Fund helped over 2000 people — a prime example of how many people abortion access funds can reach.

Marlo Barrera, intake coordinator for the New Orleans Abortion Fund, said, "For some women, a grant from an abortion fund is that last financial piece that allows her to actually go to the clinic for her procedure."

And abortion access funds often help with non-financial elements, as well. Oriaku Njoku, co-founder and Executive Director of Access Reproductive Care (ARC) Southeast, told Bustle that abortion access funds "can help [women seeking abortions] with rides, lodging, childcare, or other types of practical support which may be a barrier to accessing the care they need."

How Do They Operate?

Abortion access funds typically have hotlines or other contacts that women seeking abortions can use to get in touch. Once contact is made, folks at the fund figure out how they can help the caller.

This may sound like minor logistics — working out transportation or childcare, giving someone a small grant — but their impact shouldn't be underestimated. Every abortion access fund volunteer I spoke with had a story that particularly resonated about a time that their fund made a major impact in a woman's life. Kambabi told me about a thank you note her fund had received, from a mother of four children, who was already dealing with unemployment, the threat of foreclosure, and an abusive partner, when she discovered that she was pregnant. The letter writer had been depressed at the time and "did not want my children to continue to see me like that. We were struggling and I felt another child would unfortunately be a burden; not just on me but my older children."

The letter writer went on to note that because she was able to pay for her abortion with help from the fund, she was now in school, making a stable income, and had been able to hang on to her house and "provide a healthy, stable life" for her children.

Kabambi noted, "Notes like these really reinforce the connection between access to abortion and the economic well-being of families."

Kamyon Connor of Texas Equal Access Fund said "Every person who calls our hotline has a story...I have spoken with students who are selling their text books back mid-semester in order to come up with funds for their abortion. I have spoken with mothers whose children must go without Christmas gifts, new school clothes, or birthday gifts so that they are able to pay for an abortion and not place their family in future financial strain...There are individuals who call our hotline and say that they are in a dangerous and unsafe environment for a child to be raised in and need funds for their abortion so that they can save money to leave their abuser...Many of our callers who thank us after receiving their abortion tell us that we have saved their lives and have been there for them when no one else would or could help them."

Can You Start Your Own Abortion Fund?

Most people who found and/ or operate abortion access funds have backgrounds in some area of reproductive justice beforehand — this allows them to be more aware of a community's specific needs and how to best serve them than those of us who are simply enthusiastic defenders of the right to choose.

Njoku co-founded the ARC-Southeast with two others, after working in an Atlanta abortion clinic as patient and funding advocates and seeing a need:

We realized that there was a need for an organization that met the financial needs of the people we saw in our clinics on a larger scale. And we realized that there as a sort of missed opportunity for transformational relationships to be created with the individuals and families that were being served.

Most importantly, I wanted to create a reproductive justice organization that funds abortions because I realized that traditional choice language did not acknowledge the intersectionality of abortion access, especially for low-income, disenfranchised individuals in both rural and urban settings who consider race, class, gender, poverty, and environment, among other things, when making their decisions. So, we reached out to the National Network of Abortion Funds and they definitely supported our mission and vision as people of color in the South who shared their vision of funding abortions and building power.

But not having a background in reproductive health or activism doesn't mean you can't, at the very least, set the wheels in motion in your community. If your area doesn't have an abortion access fund, contact local reproductive justice organizations and ask about it — there may be programs in development that you don't yet know about, or you may be able to find allies who also want to work on developing a fund.

What Steps Can You Take To Defend Abortion Rights Now?

But founding your own abortion access fund far from the only way you can support abortion rights. You can donate to charities, including abortion funds (you can find a national listing of abortion funds to support here). And you can be aware of fighting the stigma against abortion — and the laws that seek to further curtail reproductive rights.

As Barrera told us, "I cannot stress the importance of voting not just in national elections, but in your local elections as well...Help reduce abortion stigma by talking about it and getting others to understand the urgency. To directly support people in your community, donate money to your local abortion fund. "

Kabambi urged us to remember that while most of us know "the Roe v. Wade Supreme Court decision essentially legalized abortion in the United States...fewer are aware of the fact that for many, Roe has never been a reality. Abortion restrictions like the Hyde Amendment and the over 280 new laws that state politicians have passed in the past four years alone have a disproportionate impact on low income women and women of color. In Philadelphia alone, the Hyde Amendment affects over 100,000 people. These policies and laws have been passed quietly on purpose, so people have no idea."

And Njoku noted that one of the best ways to defend abortion rights is to be vocal about your beliefs: "The best step we can take to protect reproductive rights is to unapologetically speak up while speaking out against reproductive injustices, regardless of if we are at the legislature or the grocery store. The time is now to to start talking about abortion access as a human right...

Yes, Roe v. Wade made abortions legal. However, the fact that it is legal does not mean we all have meaningful and adequate access to the reproductive healthcare we need. I wish more people understood that reproductive justice is economic justice, is racial justice, is social justice and is a human right."

More like this
How Getting An Abortion Has Changed From The ’60s Through Today
By Amanda Chatel
Why You're Seeing Green Bandanas At Abortion Rights Protests
By Lexi Inks
How To Fight For Reproductive Rights, Based On How Much Time You Have
By Courtney Young
The Most Powerful Photos From The Weekend’s Abortion Rights Protests
By Melanie Mignucci
Get Even More From Bustle — Sign Up For The Newsletter