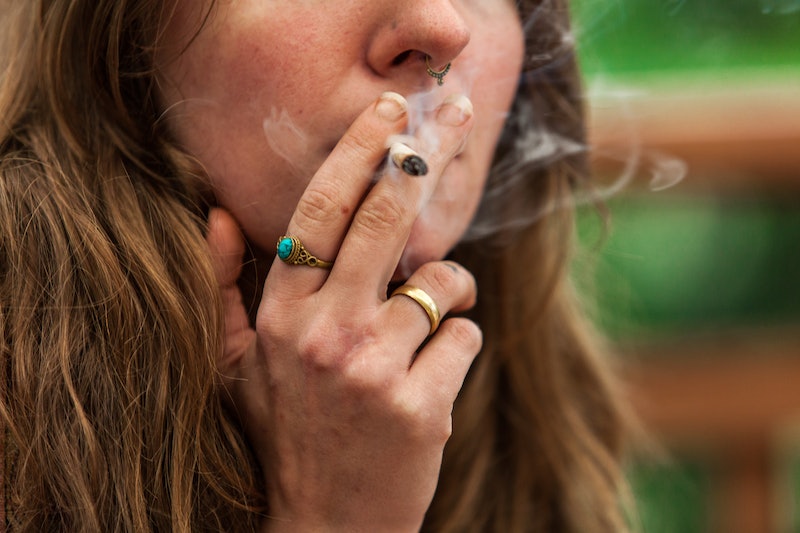 We at Bustle love giving you tips for how to tap into your sexual potential and troubleshoot when things aren’t going your way in the bedroom. But what about finding solutions to those stressful sexual health situations that inevitably crop up when you’re getting down? Emma Kaywin, a Brooklyn-based sexual health writer and activist, is here to calm your nerves and answer your questions. No gender, sexual orientation, or question is off limits, and all questions remain anonymous. This week’s topic: how marijuana affects pregnancy and fertility.

Q: My boyfriend and I love smoking weed. I personally love the way it makes me feel (particularly during sex). However, I read that smoking cigarettes can mess with women’s ability to get pregnant, and I’m wondering if marijuana is similarly bad for fertility. We’re not trying to have a kid right now, but we have discussed it for the future and I don’t want something we’re doing now to hinder that potential future goal.

A: This is a really great question. Many people use marijuana, with one estimate finding that 13.7 percent of people in the United States smoke weed. That may not seem like much, but that's actually over 44 million people. So it’s definitely important to know if this pastime has potentially negative effects on the continuation of our species.

In what follows, I’m going to go through the available research on how cannabis affects different elements of fertility, from the ability to conceive a fetus to how babies fare if they’ve been exposed to the drug during pregnancy. What I want you to keep in mind through all of this is that there really hasn’t been much research on this topic yet, particularly in humans (since most studies of this nature are on animals). Lots of these answers could change in the coming years as more research is completed on human subjects, or with larger or more diverse sample sizes.

Still, here are five questions you might have about marijuana and fertility, answered to the best of my ability based on what we know right now.

Each month-ish, most humans with female reproductive organs ovulate. This means one of their ovaries matures and releases an egg, which eagerly awaits fertilization from a sperm, or dissolves within 24 hours. An anovulatory cycle is a cycle in which an egg isn’t matured and released. If you have an anovulatory month, you can’t get pregnant that month because your body didn’t release an egg to be fertilized.

There are some strong claims out there that the active ingredients in marijuana can make you more likely to have this type of unsuccessful cycle. But what does the research show? One unpublished study of 26 cannabis users and 17 non-smokers (you should be thinking: super small sample size! and why was it never published?) found higher instances of anovulatory cycles in those who smoked the green.

Another study from the Department of Health and Human Services looked at weed smokers’ hormone levels in a lab setting and didn’t find any evidence that non-chronic smoking (aka using marijuana but not, like, all the time) messed with the hormones that dictate the female reproductive system. Research in animals has found that chronic weed use can delay egg maturation and ovulation, and so some researchers think this could also be the case in humans, but there hasn’t been enough research to tell for sure yet.

Research has found that cannabis impacts male fertility in a few ways. Animal studies show that chronic use can impact testosterone levels, slow down sperm maturation, reduce sperm count and motility, and increase the number of sperm with abnormalities. However, in humans, the results are far more mixed. Let’s look at two important, related elements: testosterone and sperm.

A bunch of studies have looked at how smoking the herb can impact testosterone levels, testosterone being the hormone made by the testes that drives sexual functioning, including making sperm and supporting erections. What researchers have found is that marijuana can lower testosterone — but importantly, not enough to deviate from normal levels, and probably not enough to be medically significant. It also depends on how much weed you smoke.

Also, the good news is that any impact on testosterone is temporary — so if you’re having trouble making babies, you can stop smoking and get right back up to your normal testosterone levels.

Many studies have found a relationship between cannabis and lowered sperm production. A recent study from the University of Copenhagen of 1,215 men aged 18-28 found that smoking marijuana more than once weekly lowered their sperm count by around one-third — and in those who also used other drugs, like coke or ecstasy, that number fell to more than one-half.

In addition, research has found that weed can mess with sperm’s ability to reach the egg — although kind of in the opposite way you might think. Sperm are super tiny and have a long way to swim up the vaginal canal to meet up with the egg. So they don’t get tired out, normally, they don’t start swimming immediately out of the proverbial gate — instead, they go with the flow of the semen for a while first and then start swimming in what is called hyperactivation. However, researchers have found that THC, the ingredient in marijuana that makes you feel high, gets the sperm swimming immediately. This means many tire their wee bodies out long before they get to the egg. Tell that to your dad the next time he says weed turns you into a slacker!

For those sperm that do reach the egg, there’s another THC-induced barrier. Sperm need to release specific enzymes that allow them to get into the egg’s barrier wall. THC can stop the sperm from being able to do this, with one study finding that around 30 percent of sperm treated with THC didn’t release these necessary enzymes.

Interestingly, you don’t even have to be the one smoking for THC to affect your swimmers — marijuana used by your sexual partner can travel to the female reproductive organs and, if encountered by sperm, can have the same results. So if you’re trying to get pregnant and are having a hard time, you might want to take a break from weed.

3. What About Erectile Dysfunction?

A 2011 study published in the Journal of Sexual Medicine found a potential link between marijuana use and erectile dysfunction. Basically, when you ingest THC, it interacts with certain proteins in your brain called cannabinoid receptors, minimally hindering your brain function. (You experience this hindrance as getting high.) Some researchers have found that these receptors are also in penile tissue, and posit that THC does the same thing in the penis — basically, getting your penis high, which may make it difficult for it to get literally higher, as in erect.

Way more research is needed to see if this correlation is real, but if you’re having trouble with erectile dysfunction, try laying off the weed for a bit to see if it helps. For science!

4. Can Marijuana Mess With Fetal Development?

There is some evidence that if you use marijuana while pregnant THC can cross the placenta barrier and end up in your fetus. Some early studies have also found correlations between chronic marijuana use during pregnancy and lower birth weight at birth, higher risk of fetal abnormality, and stillbirth.

However, a study published in the American Journal of Public Health of over 12,000 women who used marijuana during pregnancy found that the relationship between marijuana use during pregnancy and negative outcomes — low weight at birth, premature birth, and birth malformations — wasn't statistically significant. In other words, while these issues did occur more frequently in marijuana-using mothers, it didn't occur frequently enough to be statistically relevant.

Many of the studies that correlate marijuana during pregnancy and negative birth outcomes have been significantly complicated by findings that the mother’s socioeconomic status (specifically poverty level) are far more relevant, particularly for birth weight. Much more research needs to be done on pregnant women who are continuing to use marijuana to better assess any risks, and as of right now, healthcare providers are still telling expecting mothers not to use marijuana during pregnancy.

5. What About Child Development?

Once born, children can continue to experience the effects of marijuana on their systems — either lasting from exposure in the womb, or through continued exposure through breast milk. There isn’t lots of research on this (I bet you’re getting tired of me saying that right?) but some studies have found that children of those who used marijuana during pregnancy or while breastfeeding experienced neurobehavioral developmental outcomes, which is the science-y way of saying their brains were affected negatively. The Ottawa Prospective Prenatal Study specifically found that in-utero marijuana can cause your baby to be more susceptible to neuropsychiatric disorders including addiction, eating disorders, mood disorders, and psychosis.

Another study published by the National Institute on Drug Abuse found that children whose mothers used marijuana during pregnancy had some visual developmental delay right after they were born and were more likely to have tremors or be easily startled, though these effects faded within a few months. Another study also found lower functioning in these children’s memory and verbal scales.

Finally, one study published in Advances in the Biosciences in 1991 found a strong correlation between marijuana use in mothers before and during pregnancy and development of Acute Nonlymphoblastic Leukemia, a rare childhood cancer. More research is needed on this last finding, but the study was well-conceived and strongly indicated this relationship.

Most of the risks associated with cannabis have to do with using it when you’re either pregnant or trying to get pregnant, so if you’re in that stage of your life and you’re having a hard time conceiving or want to keep a fetus healthy, cutting this herb out is probably a good idea.

But if you’re not in the baby-making part of your life, I'd empower you to weigh the positives against the potential risks — marijuana has significant medical properties and can also help your sex life, for example. Until the research conclusively indicates that something is markedly hazardous to your health, I think it’s up to you to decide how you want to live your life and what’s best for your body.

More like this
This Company Will Send STI Tests Right To Your Door
By Lexi Inks
Are Sagittarius & Sagittarius A Good Match? Astrologers Weigh In
By Kristine Fellizar
How To Have A Hometown Hookup Without Catching Feelings
By Lexi Inks
15 Ways To Deal With A Toxic Family During The Holidays
By Gabrielle Moss and Carolyn Steber
Get Even More From Bustle — Sign Up For The Newsletter