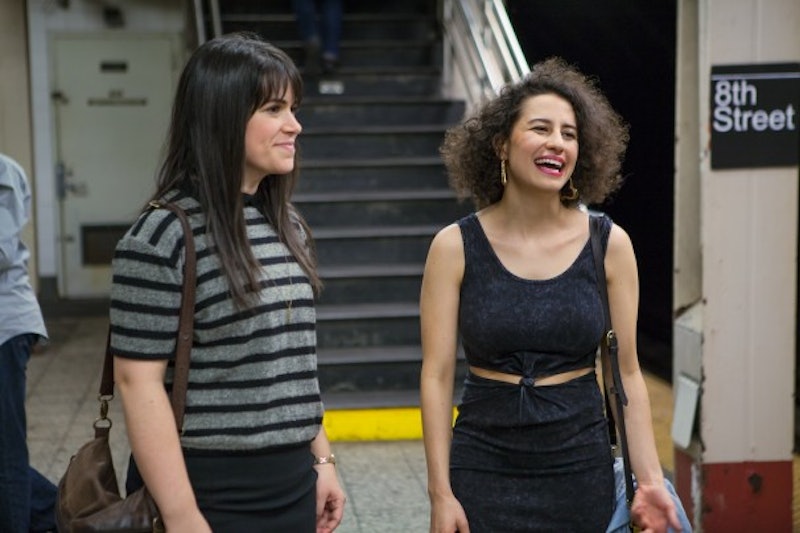 Your new favorite show, Broad City , starring Abbi Jacobson and Ilana Glazer, has been revolutionizing cable television for seven weeks now with undeniably funny and undeniably feminist comedy. Audiences are eating up the series' cringe-worthy moments and adorable bra-mance between its two stars, Jacobson and Glazer. But as much as the duo love each other, it seems we love them more. Comedy Central has picked up the Web series-turned-TV series — which airs Wednesdays at 10:30ET — for a second season, thanks to an average 1.2 million viewers per episode. (An impressive number that has made Broad City one of Comedy Central's highest rated freshman series since 2012.) In the press release announcing the second season, president of content development and original programming at Comedy Central, Kent Alterman, said "I didn't realize Broad City was so good until I read all the incredible reviews, now I'm really excited about it."

Just watch one episode of Broad City, and you'll realize the Comedy Central series is just the beginning for these two incredibly hilarious and talented rising stars. But despite the fact that they're being pegged as comedy's next Tina Fey and Amy Poehler, Jacobson and Glazer are just as normal as you and I. Need proof? Here are 10 reasons why Jacobson and Glazer are just like us... only a helluva lot funnier.

They Don't Realize How Cool They Are

With Comedy Central's pick-up of Broad City's first season came an incredible amount of industry love for Jacobson and Glazer, who have been pegged role models for feminist comediennes.

"I don't tend to think of myself in that way, but at same time I think that's a big motivation to be the best version of myself I can be, and to try and be a positive influence in the things I do," Jacobson says.

They Appreciate Their Much Deserved Success

But still understand how much effort continued success will take.

"There is so much ahead of us, so much work we have left — for Broad City, as a duo, as individuals, etc," Glazer says. "It's centering to remember I'm only just at the beginning — we all are, every day, really!"

They Worked Hard To Get Where They Are

Bringing Broad City to television was hardly easy — Jacobson and Glazer worked long hours, struggled through rewrites, and required the help of "a ton of really talented and creative people" to execute the series, according to Jacobson.

"The biggest change was including a whole world of smart, funny, creative, and attractive — inside and out — people to share this project with," Glazer says. "[But] that adjustment has made the product so much richer and stronger."

Broad City has won over critics for having a diverse cast during a time when comedy still largely ignores non-white — and, often, non-female — comedians. (Ahem, Saturday Night Live.)

"Our show tried to depict our version of New York, and that, in turn, included a diverse cast," Jacobson says. "But I think it can probably handle even more diversity, to be honest. I think everything can.

Adds Glazer, "There is and has always been a lack of diversity in media. It's changing, though, and that is exciting. It's encouraging that it's such a constant topic [that's been] discussed — the world needs to be reminded how important it is until it doesn't need to be said anymore."

The duo are flattered to be labeled the next Fey and Poehler, but stress that there are more female role models in comedy. Even if the industry doesn't make it easy to see them.

"I don't think we need to be the 'next' anything," Jacobson says. "It's insane to be in the same sentence as them, as they're obviously two of the smartest, most hilarious comedians of all time, but we're Abbi and Ilana. People love to compare and come up with the next so and so, [but] there can be more than two women in comedy — in fact there are many, many, many more!"

Because They Have More Under Their Sleeves

Despite the amount of time and energy it takes to make Broad City, the duo continues to encourage one another to branch out.

"Abbi and I encourage and motivate each other to keep making things," Glazer says. "Our potential richness or improvement as individuals feeds the duo, and we both always say we're so lucky to have met a partner with a matching work ethic. It's really what brought us together in the first place. We've got more projects coming, world!"

Because They Learn From Their Experiences

Jacobson and Glazer didn't shy way from their successes or mistakes while filming Broad City's first season. As true improvisers, they embraced them, built on them, and moved on. Just read Glazer's story about her least favorite moment filming the series so far.

"I don't want to tell you the exact scene of my least favorite moment because you'll look for my compromised performance!" she says. "But I'm going to generally say that it was the coldest day I swear I've ever experienced. I got to be in a lot of clothing — under which I could hide even more clothing, long johns, and a waffle shirt — but, unfortunately, Abbi and our friend and guest star, Morgan Jarrett, were in dresses. And it's just unreasonably cold. God was like, 'You guys think you can just go from web to TV, huh?' So I'm acting with them but just cannot stop staring at their goosebumps. Our mouths were freezing the most, and it was hard to just physically say the words [and] be present and act like I was just coming up with these words on the spot. Abbi and Morgan were in such pain, it was so sad to watch. [Laughs] But now I guess it's kind of funny."

They Pay It Forward

"One of my favorite things about the project is in episode 7," Jacobson says. "We have this amazing guest star, Shannon O'Neill, who plays Bever's sister. Shannon was a huge influence on me at UCB. She was one of my favorite teachers and one of those performers you'd watch on stage and not believe that someone could be that funny. To have her on the show was really meaningful to me and was such an honor."

They Still Use Public Transportation

Despite their newfound fame, Broad City's stars will always use the subway.

"I absolutely love the subway," Jacobson says. "It's the best people-watching place in the entire world."

And, Of Course, They're Hilarious