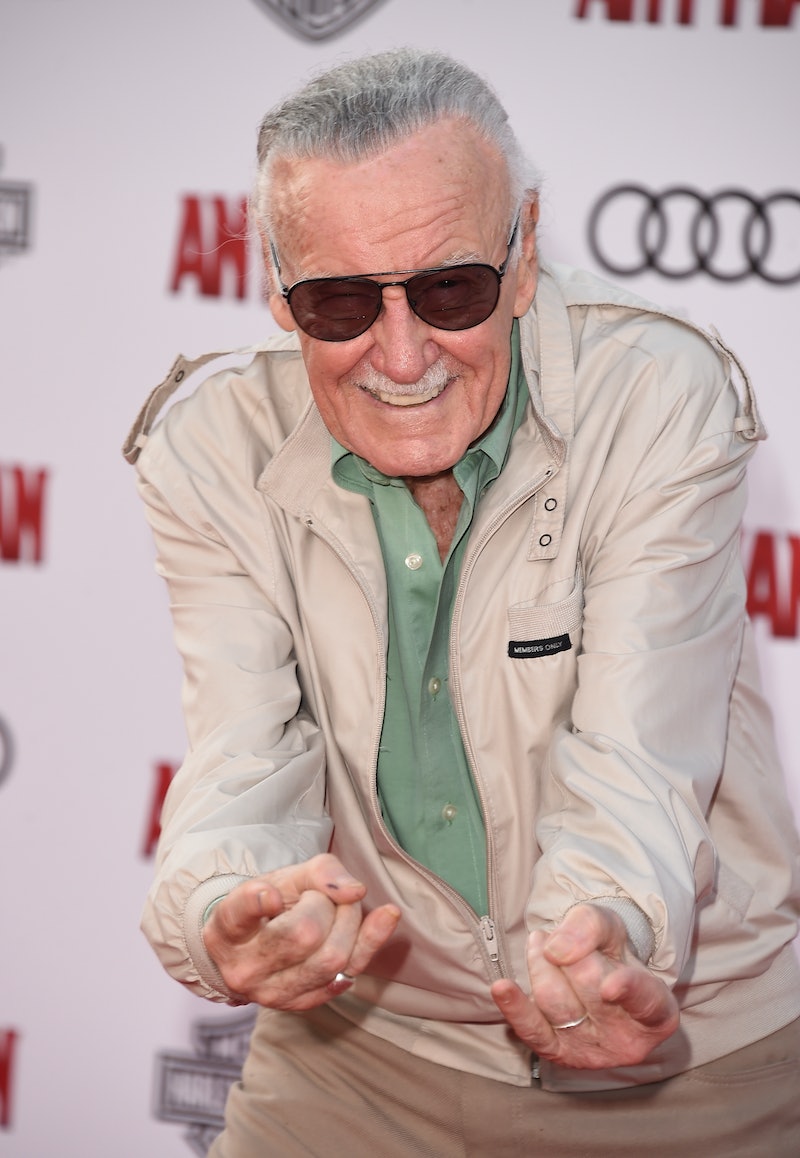 It's well known that Marvel movies are split between multiple studios — it's why the X-Men and Iron Man have never crossed paths, and why we're getting our third Peter Parker in 15 years. But, throughout studio squabbles and competing franchises, one thing has always in constant: Stan Lee. The comics legend who, along with Jack Kirby, is credited with creating some of the company's most famous superheroes, has appeared in almost all Marvel movies, regardless of studio affiliation. The man's cameos are legendary and infinitely easy to spot, thanks in part to his trademark aviator glasses and winning smile, and that holds true for the Stan Lee cameo in X-Men: Apocalypse .

Over the years of Marvel movies, Lee has played mail men, bystanders, a hot dog vendor, a security guard, and a Hugh Hefner look alike, among others. This summer, Lee has two high-profile cameos, with onscreen appearances in both Captain America: Civil War and X-Men: Apocalypse. In Civil War, he plays a delivery man, but in Apocalypse, Lee has a very different role. The icon appears mid-way through film, when the villainous Apocalypse has already recruited his four horsemen: Psylocke, Storm, Angel, and Magneto. His evil plan to take over the world is just beginning, and, in his first order of business, he decides to show his power by ridding the so-called "superpower" countries of their nuclear weapons. Remember, Apocalypse takes place in 1983, when the Cold War was still in full swing and the fear of nuclear annihilation was very real. After (spoiler alert) mentally highjacking Cerebro, Apocalypse used Charles' powers of telepathy and mind control to force all countries to set off their nuclear bombs, sending them flying into the sky.

Lee appears as one of the many concerned citizens who watches helplessly as countless bombs soar up into space. They don't detonate, so don't worry, you won't see Lee blow up on screen. The cameo might not sound too special compared to Lee's long resume, but the comic book creator has said that it is one of his absolute favorites. At San Diego Comic-Con in 2015, Lee teased the audience, calling the cameo "a different cameo in that it has one additional thing in it," according to Cinema Blend. Lee continued to drop clues about his Apocalypse cameo, saying in an interview with Larry King, "That cameo is different than any I have ever done before, because I did it with another person that is very important to me." So, who is this important person, you ask? Well, it's none other than Lee's wife, Joan. Yes, the couple, who have been married for well over 50 years and have two children, both appear in Apocalypse. Is anything more romantic than that?