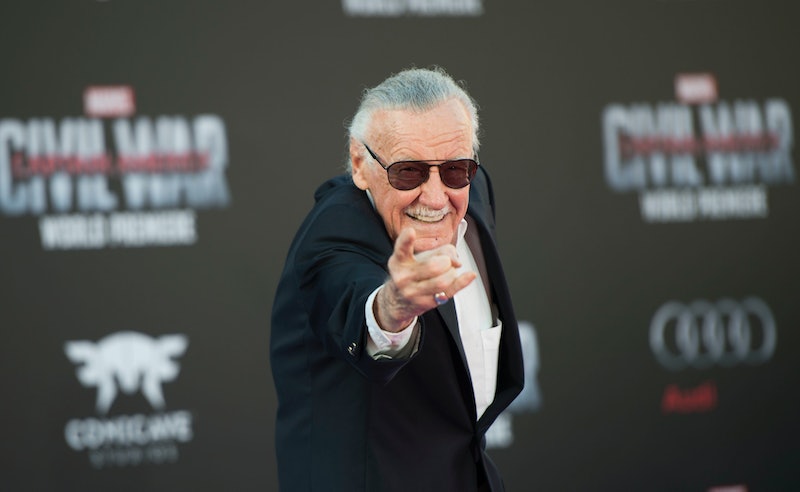 Captain America: Civil War is being hailed by some critics as the biggest and best Marvel movie yet. And while fans will likely debate that opinion for ages, there's no denying that Civil War definitely is one of the greatest superhero movies of all time. The film is funny, action-packed, weighty, and above all else, incredibly fun. In other words, it follows the Marvel formula in the best way, achieving the optimum Marvel experience. And as fans know, part of that experience is the ubiquitous Stan Lee cameo. So what exactly is the Stan Lee cameo in Captain America: Civil War ? Spoilers to follow!

I have to admit that when I was watching Civil War I completely forgot to look for Lee's cameo. There is so much going on and so many great moments, that by the time he finally shows up, it was more joyous than usual because I wasn't expecting it. He doesn't appear until basically the very end of the film, so you're already over two hours in before you get a glimpse of his trademark mustache and glasses. And unlike a few of his other more fantastical recent cameos (like playing an alien ladies man in Guardians of the Galaxy ), his role in Civil War is maybe his most realistic yet.

After the fight ends between Iron Man and Captain America, the two heroes have gone their separate ways. Tony Stark is hanging around Avengers Headquarters, Cap and Bucky are on the run together, and Cap's allies (Scarlet Witch, Falcon, Ant-Man, and Hawkeye) are all in prison. So things aren't looking great for the Avengers. That's when Stan Lee shows up to save the day. He arrives to Avengers Headquarters as a Fed-Ex delivery man to give Stark a letter from Cap. The letter is basically Cap telling Stark that the Avengers are Stark's now, and he'll do his own thing, still essentially a fugitive. He also implies that he intends on helping out those who helped him and got in trouble for it, and the last thing fans see is Cap arriving at the jail to free his superhero pals.

So basically, there are two teams of Avengers at the end of the movie, but Cap and Tony are more or less on OK terms. And who do fans have to thank for that? None other than the messenger, the great Stan Lee.