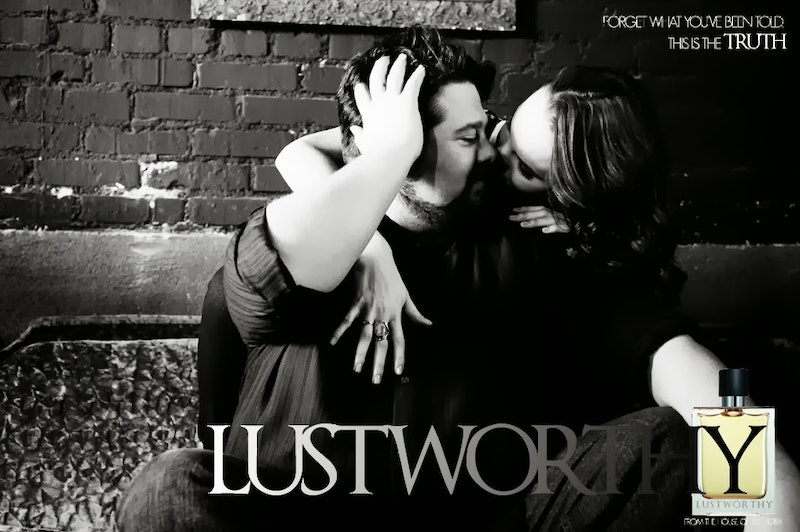 We often speak these days of the skewed beauty ideals depicted in magazines and advertisements — but the “Lustworthy” photo series, by blogger Jes Baker and photographer Liora K, really drives the point home. If a picture is worth a thousand words, “Lustworthy” is a Tolstoy novel — and now they’re back with round two.

Baker and K, who are also the masterminds behind the May 2013 “Attractive and Fat” campaign aimed at Abercrombie and Fitch, first introduced the “Lustworthy” series this past December. They created advertisements for a fake perfume called Lustworthy that features an overweight woman and a muscled man posed erotically together in various states of undress, challenging the idea of what body types are “permissibly desirable” in media.

“In projects like ‘Attractive and Fat,’ the juxtaposition of uncommonly paired bodies caused viewers to feel uncomfortable, and so it must be addressed again,” Baker wrote in December. “This negative reaction is largely attributed to companies that capitalize on the thought that atypical bodies are not attractive, desirable, or lustworthy. This is inaccurate, and the only way to shift the way we view ourselves is to repeatedly counter exclusionary imagery with positive inclusive imagery.”

For the second series, Baker and K had asked their audience what other types of bodies they wanted to see represented. Reader upon reader wrote that they wanted to see a reversal of the "Fat and Attractive" pairing – that is, rather than a curvier woman with a muscular man, a “short, fat guy” or “big guy” with a “tall supermodel” or “muscular woman.” One reader noted that occasionally we do see that scenario in real life; it’s just always in a particular setting. Baker agrees: “Most of us on the Internet (and off!) are familiar with the image of the wealthy fat man with his gold digging ‘trophy wife,’” she elaborates. “It becomes easy to assume that the only reason the woman would be with our ‘big guy’ is because of his money and power; the worth of these things far outweighing his ‘undesirable’ body. She puts up with his looks simply because the tradeoff is worth it.”

In creating this new installment, Baker and K tried to create “an image that showed the same physical traits we are used to seeing in the trope without re-creating an image of the trope itself.” The goal was to depict two people of “a similar class status” – so the idea of money as a motivator was out – but of different body types, with the attraction between them being on a “purely sexual level.”

Baker and K hope that their series will start a wider discussion about what’s conventionally considered attractive. Baker told the Huffington Post, “I’m hoping there will be both negative and positive reactions. Negative, because this is the perfect reminder of why these campaigns are so important. We must see these sorts of visuals enough to not be shocked by the content.”

And if we can get to that point, then maybe – just maybe – we can shift to an entirely different way of thinking. Because Baker and K are right: THIS MUST CHANGE.