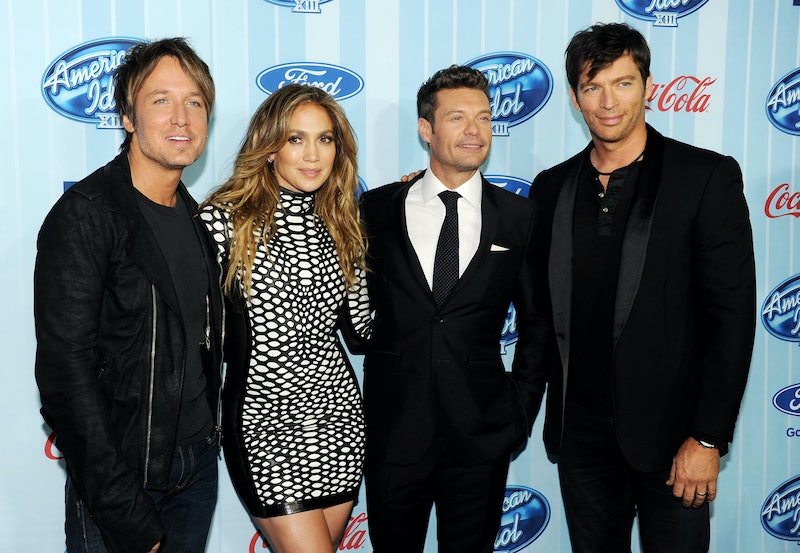 American Idol officially launched "Rush Week," the first week of live performances, on Tuesday night with an episode overflowing with firsts — a new set, a new judge, and a new contestant. While we were prepared to watch new judge Harry Connick Jr. hit his stride during the live shows and while we settled in to have a relaxing night with our favorite singing competition TV show, we were shocked to find out that Idol was going to eliminate five female contestants during the episode — before they even sang.

Throughout the course of the evening, the judges announced one by one which of the 15 female contestants was up next to perform and by night's end, five of the women, Andrina Brogden, Kenzie Hall, Jillian Jensen, Jessica Meuse, Brandy Neely and Austin Wolfe, were left sitting on the couch eliminated without ever setting foot on the Idol stage. Those poor girls had to sit on the couch with grins glued to their faces performance after performance, silently awaiting their disappointingly unfair fate.

While we'll never know what those five contestants had planned to sing during last night's episode, the bigger mystery for American Idol viewers is why this cruel decision was even made. At the top of the episode, Ryan Seacrest announced that five of the contestants would be cut from the competition based off of what the judges observed during their American Idol Boot Camp sessions with Idol alums Randy Jackson, Chris Daughtry, and Adam Lambert. The Boot Camp sessions were meant to coach the girls on how to move on stage, what heels to put on, and what shade of lipstick to try out — they didn't focus on how to be the best singer.

While we really wanted to see all of the contestants just perform already after spending weeks battling group drama, dodging eliminations, and practically begging tooth and nail for their one shot at fame, this latest scheme, although surprising, was really not that far out of left field. The show has been suffering in the ratings for several seasons and with the flashy new stage, a new judge, and Ryan Seacrest pulling out all the stops to elevate the show to its former glory, this latest stunt during the live shows comes as just another effort to grab viewers' attention. If only the producers would follow the age-old mantra, "less is more," with this new season, they might not have to battle with plummeting ratings.

Back in 2002, the show really captivated viewers with its underlying core values of raw talent, passion, triumph, and defeat that every kind of viewer could relate to, but after 12 years, those elements are getting buried under the overwhelming social media, the overpowering judges, and the pressure for these contestants to be glaringly perfect from the get-go. After all, there was a time when there was no Boot Camp on American Idol. That time is so far gone.

If producers want to preserve the authenticity of this infamous talent search and catch ratings before they plunge for good, they should should spend less time on petty eliminations and give more camera time to what we all turn the television on to see — the performances of the contestants.

If they keep rushing the contestants out, we'll be rushing to change the channel.