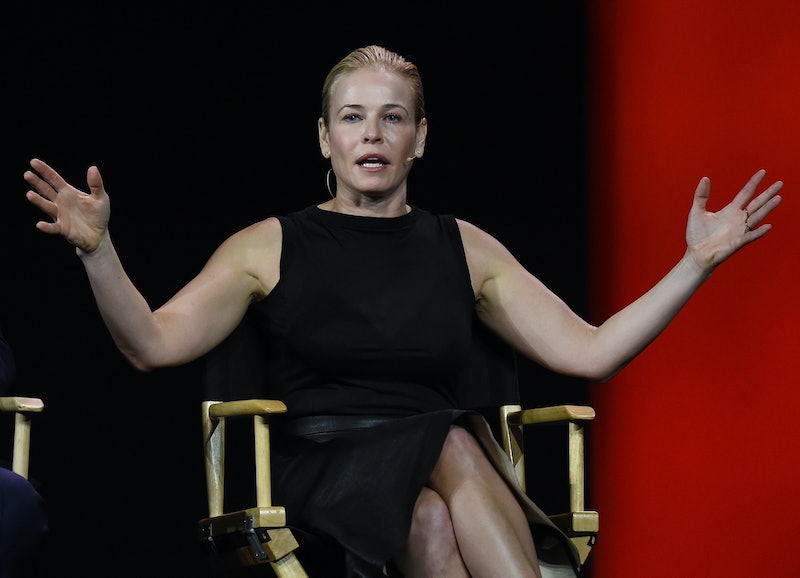 As an outspoken feminist, it's no surprise that Chelsea Handler didn't forget to include a feminist message on the Chelsea premiere. She kicked off the show by noting that, since it's an election year, the America public will need her insight during the next six months. Without it, "how will the American electorate ever be able to decide between a highly-qualified woman with impeccable credentials and a bankrupt, misogynistic, racist, orange a**hole?" Per usual, Handler pulled no punches in pointing out the absurdity of the fact that Trump and Clinton are actually in a tight race for the same position. But, the Chelsea interview with Drew Barrymore ended the show on a more positive note with the simple but incredibly important message that it's crucial for women to support other women.

Barrymore arrived with wine in hand to celebrate her friend's latest endeavor. "You're going to be a good mom to this show," she assured Handler. When Handler thanked her for flying across the country just to spend a few hours on set, Barrymore emphasized that it was a no-brainer and she wouldn't have missed it for the world. Handler expressed excitement that Barrymore will be in California over the summer — but, at the mention of dating, the recently-divorced Barrymore was quick to say that her priority right now is "girlfriend time." These two are #FriendshipGoals and something tells me they're going to have an amazing time together this summer.

Barrymore told Handler that she's been "a cheerleader for women" her entire life. As the mother of two young daughters, she's eager to raise them to become incredible women. "The biggest path in my life has been paved by women," she said. "I love women. They're awesome!" Handler seconded these sentiments by pointing out how ridiculous it is when women don't support other women. She summed it up by saying, "If you're a girl, you kind of should like other girls."

Of course, this doesn't mean as a woman you're required to vote for Hillary Clinton. Barrymore's point was more along the lines of emphasizing that women should support each other in their endeavors, rather than tearing each other down when so many other people and institutions already do that based on gender alone.

I'm sure feminism will be a focus of many future Chelsea episodes, but I love that the show's premiere emphasized the simple but oh-so-important message that women supporting other women is invaluable. Whether it's flying across the country to cheer on your friend, raising the next generation of strong women, or prioritizing girlfriend bonding time, Handler and Barrymore are spot-on — women are an invaluable support system for one another. And, yeah, we kind of should make it a priority to love and support each other.