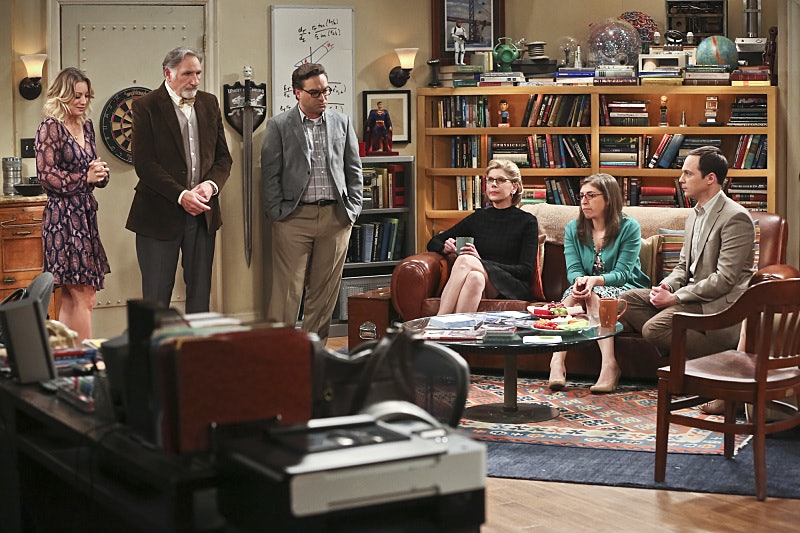 As we begin our farewell tour of May finales, one of the first ones out of the gate and on their merry way this week will be CBS' beloved sitcom The Big Bang Theory . Yes, Thursday night marks the show's Season 9 finale, which means we're looking at a long summer without our lovable nerds to keep us company. And while it's true that no amount of "Soft Kitty" renditions will be able to fill the void their half hour absence will leave behind, fans can at least take comfort in knowing that The Big Bang Theory Season 10 premiere shouldn't be too far off into the future. (Certainly not in a galaxy far, far away.)

While no official release date has been announced, looking back at the last nine seasons proves that the show will most likely premiere when it always has at the end of September of each fall season. So unless the series decides to go where no premiere of theirs has gone before, we can expect Season 10 to return around Sept. 22 or 29. Granted, considering the fact that we're only about mid-way through the month of May, this hiatus may seem on the long side right now, but I'm confident that the good weather will make the time fly by. And in the meantime, fans have a lot to look forward to in the coming season. Such as...

The Birth Of Bernadette's Baby

Odds are she won't be giving birth in this week's finale, which means we have an exciting baby birth episode to look forward to in Season 10. It'll be interesting to how these two adapt to the challenges of parenthood... and how Sheldon will handle the actual birthing process.

The Profits From The Navigational System

Throughout a majority of the season we've watched Sheldon, Howard, and Leonard work on their gyroscope invention, so hopefully next year we'll get to see them reap some financial rewards for all of their hard labor. Plus, it'd just be fun to observe how each of them would choose to spend their newfound money. Heck, Penny and Leonard could even spring for a different apartment... or even a house.

Amy & Sheldon's Next Step As A Couple

Season 9 marked a turning point in this couple's relationship when they both agreed to have sex together for the very first time. (Something we weren't ever sure Sheldon would be willing to experience.) So now I'm curious to see where the writers intend to go from here. Maybe Season 10 could be the year they decide to move in together. Let me be the first to say that I am ALL for that happening.

Raj Developing A Story Arc That I Care About

As much as I love Raj as a character, I'm a little over his whole back-and-forth plot line of dating two different women. Let's give him a plot development worth rooting for next season, shall we?

Suffice to say, Season 10 is sure to present a lot of great opportunities for these characters. So while the summer hiatus may seem long right now, I think we can all agree that it'll prove to be well worth the wait.