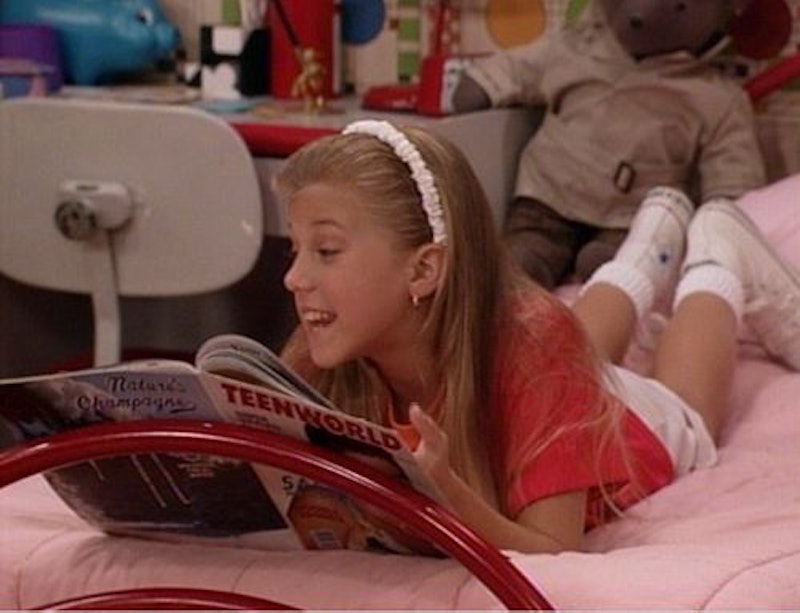 Listen, before you come at me with "Middle Child Syndrome" talk, know that I, like D.J. Tanner, am the eldest of three children. So, to put it plainly, you're beat on that argument. I understand that this wildly controversial opinion will upset some. I am prepared for that. I am also aware that's it's generally pretty unhealthy to pit siblings against one another. But, you know what? The Tanners are fictional, so I'm cool with it. Here goes nothing: Stephanie Tanner is actually the best Tanner sister (sorry, Michelle), and I'm about to school all you naysayers as to why.

Am I being a bit aggressive? Maybe. I just have a lot of pent up frustration after watching the show as a child and then again as an adult, and witnessing the wild injustice of uneven attention giving that was perpetuated in the Tanner household by not only the Tanners, the Katsopolis family, and Joey, but by the general public as well. I would also like to say that I don't actually harbor any dislike for Michelle. In fact, she is the source of some of my most favorite reaction GIFs, and one of my favorite characters on the show besides. I'm simply tired of her pulling focus because of her cuteness, while Stephanie is under appreciated, that's all.

Here are the reasons why that Stephanie Tanner is a better character than Michelle Tanner, hands down.

1. She Had The Cute Full House Catchphrase First

Well, at least on the kid catchphrase front. (Can't forget Uncle Jesse's "Have Mercy," of course.) The fact of the matter is, for the first two years, Michelle couldn't contribute much, being a baby and all. Stephanie was the trademark little sister. She was sweet, funny, and yes, annoying, and it was fun to watch her deal with her immaturity without every adult on the show being overly concerned about her feelings.

2. She Had Great Comedic Instinct

She even gave Joey a legitimate run for his money. I know that she's a D.J. on Fuller House, but she had a real shot at stand up comedy.

3. She Was Spunky As Hell

Michelle was an adorably devious toddler, but, as she got older, she grew out of her mischievousness and became more of a goody two shoes. On the other hand, Stephanie never lost her edge. Which, brings me to...

4. She Was Way More Relatable

Not that I expected Michelle to be offered drugs during story time in her Kindergarten classroom (what a wild storyline that would've been), but the worst trouble Michelle ever really got in was climbing that fence in the schoolyard. I can't tell you when I was ever peer pressured into scaling a fence, but I can recall being offered some illegal substances quite a few times during my adolescence.

5. Everything Didn't Always Have To Be About Her

Stephanie could seamlessly fit into a number of storylines and scenarios with ease and still manage to steal the show. Meanwhile, whenever 5-year-old Michelle took the lead, I kept asking myself where Stephanie was.

It's what made her interesting.

Unlike Saint Michelle, her actions actually had consequences.

8. She Was Cute Without Being Cutesy

There is a fine line for kids on TV shows between being endearing and annoying. Stephanie fell on the right side of that line.

9. She Was The Perfect Foil For Kimmy Gibbler's Shenanigans

It was a tough job, but someone had to do it. She really stepped up to the plate and took one for the team. It was selfless, really.

And that, friends, is why Stephanie will always reign supreme. Michelle was lovely and everything, but, come on. She's no Stephanie Tanner.