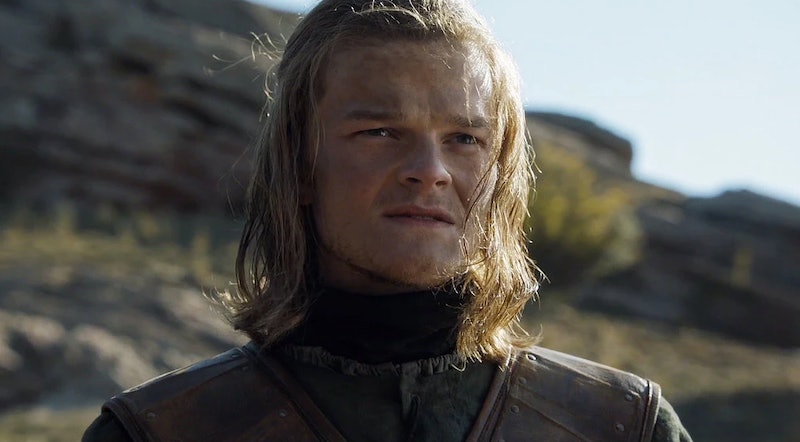 Bran has changed a lot since we last saw him, and his visions on Game Of Thrones Season 6 are changing everything that we thought we knew about the show. Now that the HBO series has surpassed where the characters left of in the A Song Of Ice And Fire books, Bran’s visions are taking us into uncharted territory. With the flashback in Episode 3 to Ned beginning to rescue Lyanna in the tower, fans learned that he actually needed the help of Howland Reed to defeat the guard. But what will Ned find in the tower when Bran’s vision eventually leads us there? A pregnant Lyanna or baby Jon Snow? When thinking about the whole R+L=J theory on Game of Thrones, Ned’s actions throughout the series make sense when looking at other media. Ned Stark proves that Rhaegar plus Lyanna does equal Jon Snow.

While most fans can agree on the fact that Jon Snow’s parents are Rhaegear and Lyanna, the jury is still out on what we are going to find in the tower. Was Lyanna raped as a prisoner of Rhaegear? Or, were Rhaegear and Lyanna star-crossed lovers? Was this a Romeo and Juliet style secret relationship surrounded in a shroud of relative killing? Rhaegear’s father, Aerys, did kill Lyanna’s dad and brother, Brandon. So, even if their relationship was consensual, I doubt Lyanna’s big brother and rescuer, Ned, would see it that way. Regardless of an alleged romance, Ned would hate Rhaegear and you can see glimmers of this disdain in Jon Snow’s childhood, and this behavior follows similar archetypes in other media.

Much like Snape was forced to protect Harry Potter out of his love for Lily, it pained him because of his hatred for James. And, in Star Wars, Obi-Wan guided Luke despite his love/hate relationship with Luke’s father, Anakin/Darth Vader. This idea of guiding a child with mixed emotions about the parents is a common literary device, and Ned’s actions lead me to believe his character is the same archetype as Snape and Obi-Wan, in his relationship to Jon Snow.

When the Starks were a happy-ish family in Winterfell, Jon Snow (the chosen one) never fit in with the rest of the family. He drew the white wolf, after all. And, though she tried to conceal her feelings, sometimes Catelyn's disdain for the bastard child would come through with a nasty comment. It is clear that she was not privy to Ned’s R+L secret. I’m sure she could sense secrecy, in addition to the betrayal of a bastard child. The old, "it's not the secret, it's the lie," cheating reaction. Ned, however, did protect Jon and raised him with his own. But, Ned was always sort of distant toward Jon and, honestly, he just sort of sent Jon off packing to the Wall. All of Ned’s actions and Jon’s place as the outsider make more sense when you think about how Ned would be raising the child of a man he hated, out of love for his sister Lyanna.

Hopefully, Bran’s visions hold more answers that not only confirm R+L, but also shed some light on what went down between Rhaegear and Lyanna … and Ned.