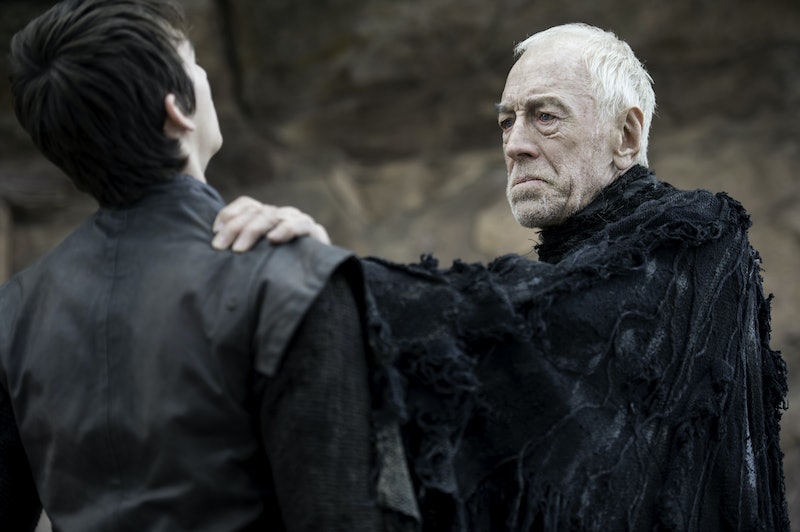 We are only three episodes into Season 6 of Game Of Thrones and there are already an astounding number of theories and questions floating around. One of the biggest mysteries that fans have been trying to unravel revolves around Bran and Three-Eyed Raven's excellent adventure. These two crazy bros have been popping back into the past every episode now and this past Sunday, things took a pretty shocking turn. With all of the time-traveling going on lately, could Bran potentially change the past on Game of Thrones? The Three-Eyed Raven may have told him that, "the past is already written" and that "the ink is dried," but he could just be trying to keep him from knowing too much or changing things. It's not too far fetched of an idea.

This past Sunday fans finally got a glimpse at the events surrounding the Tower of Joy. Through a trip with Bran and Three-eyed Raven, we were given a small peek at the battle between a young Ned Stark and Sir Arthur Dayne, where Ned killed the legendary knight after Robert Baratheon led a rebellion to retrieve his betrothed, Lyanna Stark (aka Ned's sister) from the clutches of Rhaegar Targaryen. After he killed Sir Dayne, Ned heard a scream (sounding like Lyanna) from the tower and started climbing the stairs. Just as Ned ascended the stairs, Bran called out to his father. To my surprise, young Ned turned around as if he heard something. What does this mean? It sure looked like he heard his future son.

Well, this really brings things into an earth-shattering arena for fans. If Bran can interact with people from the past, it potentially makes him one of the most important characters in the entire series. He could have legitimately set the whole saga into motion by involving himself in the past. There are a couple of pieces of evidence that show that Bran has some seriously impressive magical savvy when it comes to interacting with the characters that fill his visions. One piece of evidence we have already spoken about, and that is where Bran seemingly got young Ned's attention last week. The other example is from the trailer. Did anyone else catch this part?

Yeah, that's a white walker straight up touching Bran. We know that it's a vision because Bran is walking. But is it the past, present or future? Why can the Night's King touch him? Also, why can Bran walk in his visions? So many questions!

Well, I think that Bran walking in his visions must mean something. Each little tidbit on the show ends up having a reason to exist at some point in the story. Could it possibly be because he ends up changing the past and it leaves him without his injuries in the future? If Bran ends up realizing that he could change events that have already occurred, he could prevent himself from being thrown out of the tower by Jaime Lannister in the beginning of the series.

This leads into some pretty mind blowing fan theories regarding exactly what is going on with Bran and his time traveling companion. Here are some of the most interesting ones I saw:

Reddit user Miekix hypothesized that Bran may have possibly influenced Ned's decision to raise Jon as his own son. The Redditor wrote, "After hearing Bran, he (presumably) sees Lyanna's son, and decides to become his father, right after Bran yells the word father at him. What if Bran gave Ned the idea to raise Jon as his son?" It's a pretty valid theory. Ned hears the word, "father" and then is immediately (again, presumably) asked to become a father? It would make sense that he could have possibly taken it as a sign from the gods that he needed to raise this half Targaryen child (Jon) as his own.

Bran Could Be Responsible For Hodor

This one would be a really crazy turn of events if it ended up being true. Ever since fans got a glimpse of Hodor in the past, as a boy named Wylis who could definitely speak in full sentences, theories have been popping up everywhere about exactly how he became the Hodor that we all know (and love) today. Redditor Alsterwasser floated a theory that Bran actually made Hodor the way he is by either warging into him and accidentally making him lose his mind or by scaring him by communicating with him through a vision (like he did with Ned). The first part of the Redditor's theory is that Bran warged into Hodor, as we have seen him do before. In the books, it says that the first time Bran did this, it scared Hodor immensely. Well, what if it actually scared the senses out of Hodor? In the second theory, the same Redditor goes on to hypothesize that Bran will yell his name (because he only knows him as Hodor) to stop him from something or to warn him of something and it will frighten Wylis so much that he will be "broken." From then on, he will only be able to say "Hodor" because that's what he heard.

Bran Set Everything Into Motion

This theory is the real mind blowing one. What if Bran was the cause of The Mad King Aerys' psychosis? Redditor NegativeKarmaSniifer thinks that Bran may be to blame for the entire Game Of Thrones saga. The user wrote:

From S6E3, Bran realizes that others can hear him during the visions from the past, but doesn't understand that they cannot fully understand him. He attempts to reason with King Aerys when shown a vision of him. The King only hears whispers, and is driven mad by it. Bran tries to fix this, however makes it worse. Mad King Aerys burns Bran's grandfather alive while Bran frantically tries to stop him. All he hears is whispers. Bran sets the events of the show in motion.

Whoa. So, Bran could actually be the cause of the entire thing. Many people blame Bran to some degree because he was spying on Cersei and Jamie in the tower, which led to Ned becoming more apt to question the rumors about the Lannisters and thus, start a strained relationship which led to so much violence. The real kick off to the distrust between the Lannisters and Ned seems to occur when Jaime killed King Aerys (becoming the Kingslayer) and subsequently took a seat on the Iron Throne. Jaime, of course claims that this was purely from exhaustion but Ned saw it as a slight. The entire reason that Robert Baratheon started a war to take King Aerys out of power was his decent into madness. Aerys is described as hearing "whispers" in the books. Could those whispers be Bran? It's entirely possible.

There is a lot to think about this season on Game Of Thrones. With the return of Bran and The Three-Eyed Raven, things have become even more complicated and wholly fascinating than they were before. Hopefully we will get some answers to these burning questions sooner rather than later.