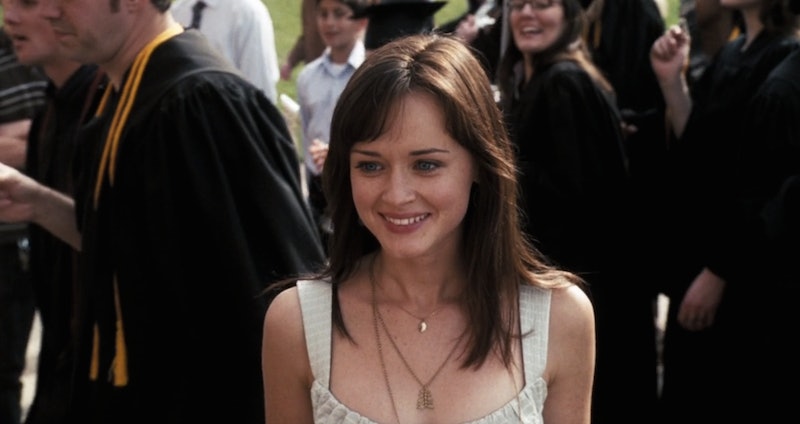 Considering how beloved Gilmore Girls is, it’s pretty remarkable that most people seem to have forgotten about the 2009 Alexis Bledel film Post Grad . The movie in question has an 8 percent rating on Rotten Tomatoes, but hey, it’s graduation season, right? So at long last, I was tempted to check in on the film for a rewatch. And oh, it didn’t disappoint.

Post Grad reads like a second tier, slightly-more-modern version of Reality Bites. It follows adorably arrogant Ryden as she attempts to get her first big girl job, and after her initial publishing dreams are shattered, she falls more and more into a post-grad slump. Luckily, her token Nice Guy slash best friend Adam is there to pick up all the pieces and write her some creepy acoustic songs. Ryden is so busy trying to get a job that she isn’t seeing what’s right in front of her... will she realize Adam’s affections before it’s too late and he flies off Columbia Law School? Will she get a job, like, ever?

Along the way to what is a pretty predictable ending, Post Grad delivered 21 amazingly ridiculous moments that made every minute of this rewatch totally worth it.

More importantly, who had a Myspace in 2009?

Also sans the wise-cracking mom, but otherwise, it's the same character.

3. Where Is She Going, Why Doesn't She Have Her Robe On?

How does she expect to make it in the real world if she can't follow graduation dress code?

Actually, this was pretty much me at my own ceremony. Never attend a long event without snacks.

5. Ryden Thinks She Can Afford This Gorgeous Los Angeles Loft On An Editorial Assistant's Salary

God, I can't wait for reality to get the smile off that smug face of yours.

But that's none of my business.

7. "That Is The Girl That I Fell In Love With... But Harbors Nothing But Platonic Feelings For Me, Unfortunately"

This dude is supposed to be our film's Ethan Hawke, but lines like this definitely frame him more like a millennial version of Duckie.

6. Anyway, Then He Gives Her This Totally Platonic Foot Rub

This isn't weird, this doesn't make me feel profoundly uncomfortable.

7. She Is Looking At Listings In The Newspaper

8. No Aspect Of This Outfit Looks Appropriate For An Interview

I'm really hoping she's not bringing the pink bicycle into the office too, the montage seems to imply "probably not."

9. Everyone Except Ryden Gilmore Over Here Seems To Have Set Jobs And Post-College Plans

Also the fact that there's a subplot about stolen belt buckles.

Grandma is the saving grace of this film.

A good opportunity to showcase how ill-fitting everyone's pants are, also the hot guy next door who has an indistinguishable accent.

16. "So, First Of All, I'm Just Gonna Rock The Socks Off Everyone At That Show. Second, You're Gonna Throw Your Bra Onstage, Just Scream Like A Little Girl."

SO, FIRST OF ALL, "rock the socks off"? Good luck with aaaaall of that. Second, that is a supremely creepy thing to say. And thirdly, I just need you to go.

17. Ryden Miraculously Gets A Call About Her Dream Job Freeing Up

And they immediately offer her the position, despite have a mediocre 30-second interview, which tbh is about as long as she was actually unemployed. But hey, at least she's not going to take this amazing opportunity for granted.

18. No Snark, I Just Really Love This Top

So cute, probably the second best thing in this movie next to Grandma.

19. But Anyway, Ryden Decides To Go Chase Fedora Lad To New York & Give Up Her Dream Job

Naturally, she asks her dad if it's the worst decision of her life (I mean, I can tell you the answer to that).

21. So She Shows Up Bags In Hand To Declare Her Love To This Dude, Doesn't Notice The Woman On His Bed

But obviously it's his RA, I mean, nobody else is vying for this guy.

If you watch Post Grad for these absurd moments, may I make a recommendation? Follow it up with the Gilmore Girls graduation episodes. If Ryden causes you to lose faith in graduates, Rory will certainly help you get it back.