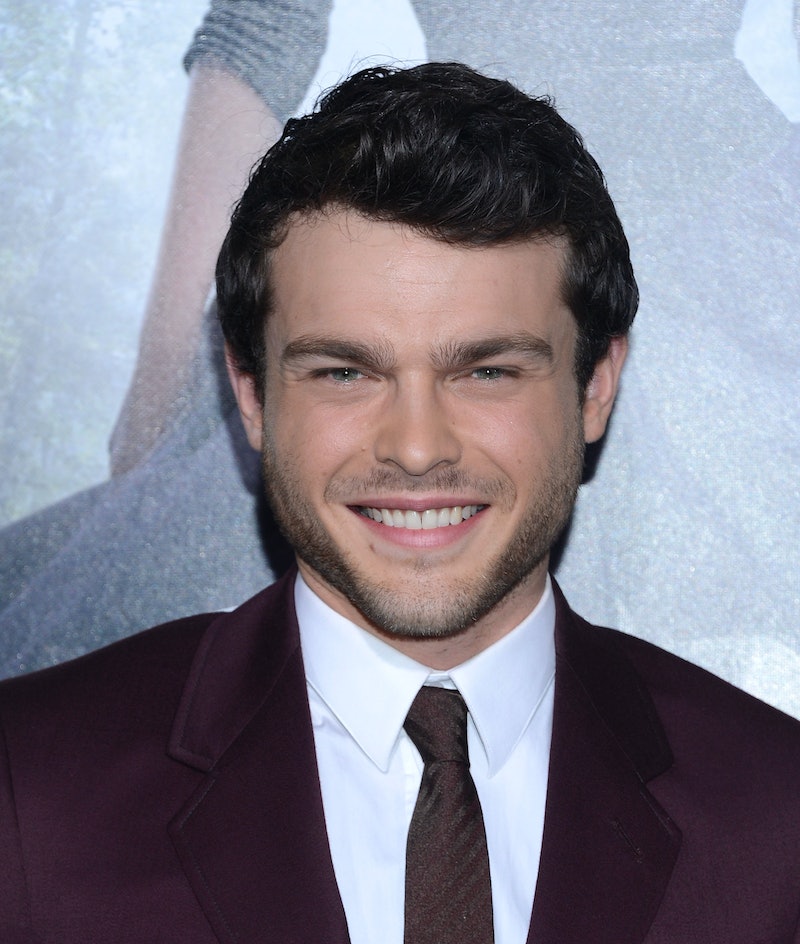 Ever since the exciting announcement that Alden Ehrenreich will play Han Solo in a Star Wars spinoff, the internet has been understandably abuzz. The little-known actor, who received his breakthrough role in Joel and Ethan Cohen's Hail Caesar!, managed to win the role of Han Solo against a gigantic 2,500 person casting call, which included actors such as Miles Teller, Aaron Taylor-Johnson, and Dave Franco. So obviously, all everyone wants to know is who is this guy? Can he live up to Harrison Ford's legacy? And where did he come from? Well, according to The Hollywood Reporter, Steven Spielberg discovered Ehrenreich at a bat mitzvah.

That's right, at just 14 years of age, Ehrenreich was spotted by Spielberg in a bat mitzvah video before going on to star in films for such esteemed directors as Francis Ford-Coppola and Woody Allen. Amazing, right? I don't know about you but if Spielberg would have seen any awkward videos of me at 14, it definitely wouldn't have resulted in a high-flying acting career. And strange as it may seem, Ehrenreich's unusual discovery isn't actually all that uncommon for Hollywood; there have been plenty of stars who were discovered in just as odd ways.

According to the New York Times, at age 15 Dawson was simply hanging out with friends in front of her building when she was spotted by filmmakers Larry Clark and Harmony Korine, who cast her in the controversial movie Kids.

According to Pennsylvania newspaper The Morning Call, Portman was discovered in a pizza parlor in Long Island by a Revlon representative who urged her to consider a career in modeling, which eventually shifted to acting.

Apparently, we have Wes Craven's daughter (and one of her friends) to thank for Depp's career. The director told Vulture that his daughter and her friend picked the "greasy ... pale and sickly" actor out of an assortment of headshots to play Glen in Nightmare On Elm Street because they thought he was "beautiful." Good call, ladies.

Enjoy tenuous links? Sossamon told Paper that she was helping a friend DJ at Gwyneth Paltrow's birthday party in LA when a casting director noticed her and a few months later asked her to audition for A Knight's Tale. "A friend of mine was supposed to be the DJ, and he wanted me to come with him so he could take breaks and hang out," she said of the night that would end up changing her career.

Lawrence told the New York Times that she was approached by a talent scout who took her picture while on vacation with her mom in New York. "Then I went into the agency and did a cold read for a Reese’s Peanut Butter Cup commercial. They told me it was the best cold read they’d ever seen from a 14-year-old. My mom told me they were lying," she said.

At a Mad Max event with The Los Angeles Times' Geoff Boucher, Gibson confirmed his unusual casting for the action classic. He'd "gotten into some serious trouble" and had a "busted face" when he dropped off his roommate and drama school classmate at a Mad Max audition. They took some photos of his injured face, which helped him land the career-making role.

According to the Los Angeles Times, Anderson was discovered at a Vancouver football game when an image of her wearing a shirt with the Labatt's Blue beer logo appeared on the big screen and brought her a ton of attention.

If Ehrenreich and these celebrities prove anything, it's that fame can find you in even the most unexpected places.