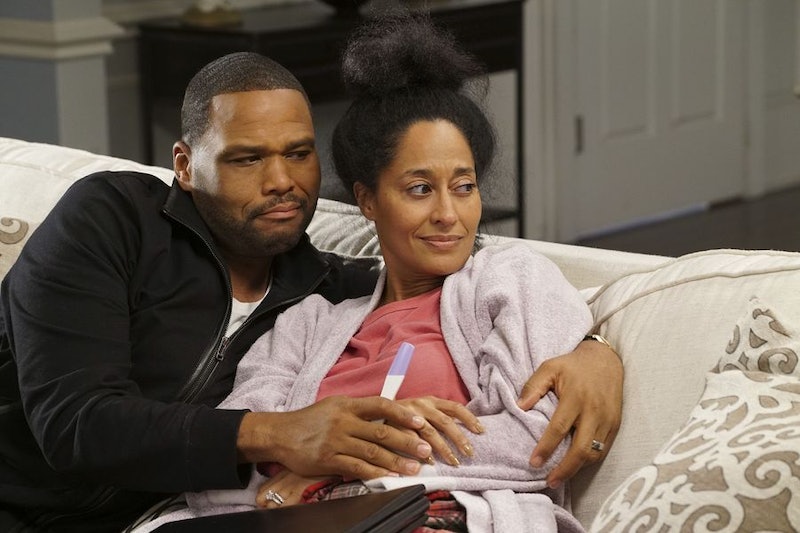 black-ish Season 2 continues its victory lap towards the finale, it takes a moment to examine every germaphobe's nightmare: Ruby and all of the kids get sick, which naturally causes Dre to flies into a panic because it's right when his company is going through a rough patch. And while Dre first begins by carrying a preventative spray bottle of bleach around all day, things really go wrong when Bow also starts feeling sick. Right as Dre is halfway to learning a typical lesson about what it's like to do what Bow normally does without breaking a sweat, the show drops a huge bombshell: Bow is pregnant with another child! That's going to take the Johnsons from an already formidable four kids to an unthinkable five.

I'm curious what that's going to mean for the show going forward. Its already demonstrated that it's not afraid of continuity on things like Zoey's maturation or Diane's transformation into a real evil genius. Watching the Johnsons go through the insanity of a new baby should add more anarchic comedy (I sincerely doubt this show will get all sappy on us) as well as adding more tension to Dre's work troubles and Bow's anxiety over whether or not she's a good mom. By the way, will this finally buy Tracee Ellis Ross a little solo joke time?

Because I've loved seeing her as Dre's partner and equal, but I'd like to see how Bow reacts to taking maternity leave or how she goes crazy realizing how much parenthood has changed even since Jack and Diane were born (there's a lot more blogging!). But the baby reveal is just the last few minutes of the episode — it's more of a teaser than the real meat of the episode.

I completely sympathize with Dre for once — the flu has got to be one of the toughest parts of being a parent. And when Dre tries to take care of his kids, they complain that he's not just like their mom, which is when he realizes: why not just maximize his cool dad-ness? So fried chicken soup, cough medicine disguised as "shots," and an awesome sick day blanket fort.

It's a smart choice for an episode that ends with the baby bombshell. Because while black-ish has dipped into a lot of different areas this season, from politics to religion, all along the way Dre and Bow have been total #relationshipgoals and there's no way this new baby won't mess with that.

More like this
'Bridgerton' Season 4 Will Likely Focus On This Brother's Divided Heart
By Grace Wehniainen and Alyssa Lapid
What’s New On Netflix: A Victoria Justice Rom-Com & The Return Of David Letterman
By Arya Roshanian
Selena Gomez’s ‘SNL’ Hosting Debut Had Twitter Gushing Over ‘Barney’ & Wigs
By Stephanie Topacio Long
'Bridgerton' Star Nicola Coughlan Confirms Season 3 Will Focus On Colin & Penelope
By Grace Wehniainen and Alyssa Lapid
Get Even More From Bustle — Sign Up For The Newsletter