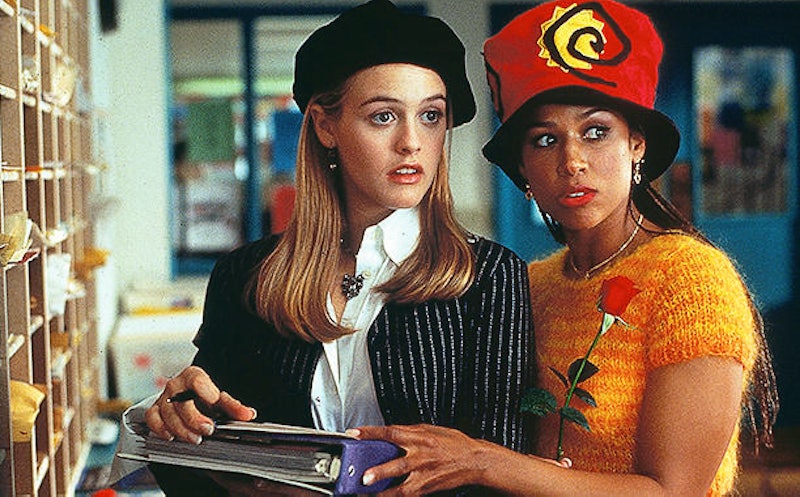 When you look back on all the things your friends did to annoy you in the '90s, you'll come to find that most of those annoyances don't exist anymore — well, depending on how hard you're holding onto the '90s, that is. But no matter how many years pass, you'll find that the things that made you sad in the '90s still feel pretty fresh, and you have no trouble recalling that your friendships had their fair share of trials and tribulations. Of course, friendships are fraught with a lot of personal and emotional stuff no matter when you were born, but the specific things that annoyed you back in the '90s were very era-specific.

There were good things about '90s friendships, of course. Not all of it was getting upset at each other. You had matching outfits and mutual '90s crushes and your enthusiasm for swapping questionable lip gloss flavors to get you through. You endured. And luckily, a lot of the things that upset you then couldn't possibly upset you now, since most of them don't exist. Here are 12 things your friends did that might upset you in the '90s that aren't a thing anymore.

1. When They Wanted To Be Pumba When You Were Singing "Hakuna Matata"

Everyone knew the Pumba bit was the best bit, and you knew all the words perfectly, where as your friend would always mess it up. This was one of the most frustrating things your friends could do to you in the '90s (it was a much easier time, clearly).

2. When They Pushed The Glass During A Seance

They said they didn't but you know they did. You could see it in their eyes. It infuriated you as a '90s kid. The worst part is they still won't own up to it.

3. When They Cheated Using The Cootie Catcher

It was the most annoying when you'd go to all the trouble to make a cootie catcher and use it to solve your friend's problems, and then they wouldn't like the answer so they'd cheat and just open another panel until they got the answer they wanted.

4. When They Wouldn't Listen To You About Which Was The Right Side Of The Tape

When you would insist that side A was rewound, and that you knew which side it was — and when they wouldn't listen, and put it in the other way anyway, your ears would blow steam.

5. When They Tricked You Into A Three-Way Call

Being tricked into a three-way call in the '90s was the devil's work. And it happened to all of us at one point or another.

6. When They Used Your Gel Pens Without Asking

Gel pens were precious commodities back in the day. And your friends would always go for the good colors, like gold and pink, and you'd find yourself running out of gel way too fast.

7. When They Ignored You On MSN Or AOL Messenger

I guess there are equivalent ways to ignore people on technology these days, but in the '90s, it was way worse. You had allocated internet time, and if your friend didn't respond to you in that time, the chat was over. There would be no other opportunity to chat online in your evening.

8. When They Taped Over Your Tape Of Saved By The Bell That You Lent Them

Sometimes you'd lend tapes to friends and sometimes they'd forget which tape was which and accidentally tape over yours. Imagine if your friend deleted the contents of your DVR. Same thing.

9. When They Called You From A Payphone And Got Halfway Through Telling You A Secret Before Running Out Of Cash

WHY WOULD YOU CALL SOMEONE FROM A PAYPHONE IF YOU DIDN'T HAVE ENOUGH COINS TO GET THROUGH THE FULL SECRET? That's just torture.

10. When They Kissed Your Crush In Spin The Bottle

It wasn't necessarily their fault. It was the rules of the game (don't hate the player, hate the game). But it still annoyed you endlessly.

11. When They Put Your CD Face Down On The Counter And It Got Scratched

Everyone has that one friend who was bad at looking after other people's things, who would always put your CDs down in such a way that they got scratched. You'd be extra upset if that CD started skipping over your favorite track as a consequence.

12. When Their Sun In Worked And Yours Didn't

Again, not really their fault. But still not fair that their Sun In made their hair look perfectly sun kissed and your hair didn't even change a little bit.