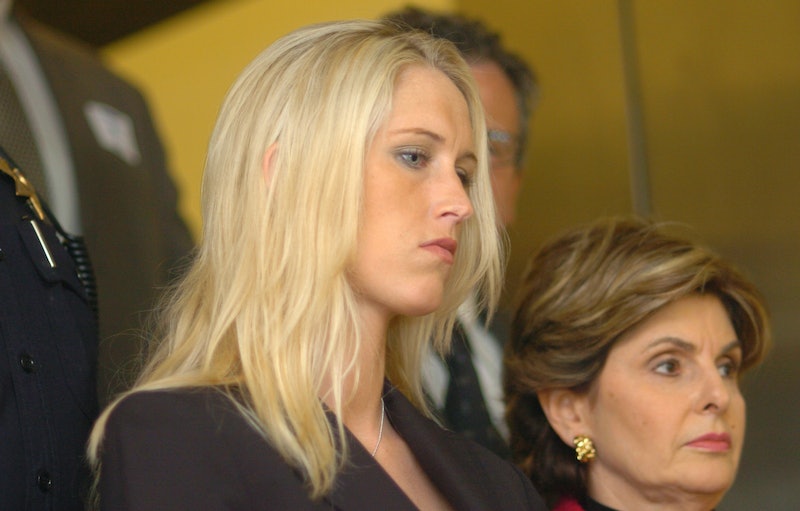 It's been over a decade since Scott Peterson's girlfriend Amber Frey assisted the FBI in gathering evidence against him. That evidence would later be used to convict Peterson of the murder of his eight-and-a-half-month-pregnant wife Laci Peterson and their unborn son. He was ultimately sentenced to death by lethal injection in 2004, and is currently being held in San Quentin State Prison. During the trial, prosecutors claimed that Peterson's affair with Frey motivated the 2002 murder.

At the time, Frey was a masseuse in her late 20s and unaware that Peterson had a pregnant wife at home. The two met when Peterson was working as a traveling fertilizer salesman. When reports of his missing wife surfaced, Frey knew something was off. Prosecutors involved in the case told People that Frey called the police station six days later to let them know that she had dated Peterson.

It was exactly the lead that the investigators expected. According to them, Peterson hadn't acted particularly concerned over his wife's whereabouts, but that alone wasn't enough to arrest him as a suspect. Stanislaus County prosecutor Jon Buehler was impressed by Frey's willingness to disclose all necessary details:

Her recall was extraordinary. She had dates, times, locations, restaurants. She had it down to gifts, cards, corks from wine bottles that she and Scott would sign. Compared with most of the witnesses and victims, she was exceptional for having that kind of detail.

Though she played a key role in helping the prosecutors arrest Peterson and said she never knew he was married, America quickly labelled Frey "the other woman." In November 2003, she was featured on the cover of an issue of People magazine because of it. Since then, she's tried avoiding recognition in order to move on from the high-profile case. In February 2015, Inside Edition reported that Frey had continued her career as a massage therapist and is now the mother of two children, ages 14 and 11. In September 2015, she told Today's Matt Lauer that she doesn't regret anything, but wishes people would forget about the trial:

We're doing good. I don't regret anything. As crazy as it sounds as what came out and whatnot, I would do it all over again because it wasn't about me. There was a missing woman carrying a child that if I had something that would help, without question (I would).

Frey has also written her own piece for Today, explaining how she moved past the incident. She opened up about how she's raised her two children as a single mother, and explained the chaos that comes along with splitting her children's time between herself and their two separate fathers. She recalled how she lost her house during the market crash and went through a divorce. Lastly, she concluded that although Peterson's case is now a part of her history, it has not changed her character. The past decade hadn't been easy, but she's continued to take steps forward and remain positive.

More like this
The Most Powerful Photos From The Weekend’s Abortion Rights Protests
By Melanie Mignucci
What’s An Open Relationship, Actually?
By Lexi Inks
Passive Aggressive Examples To Look Out For In A Partner
By Jessica Estrada
Are Quality Time & Words Of Affirmation Love Languages Compatible?
By Lexi Inks
Get Even More From Bustle — Sign Up For The Newsletter