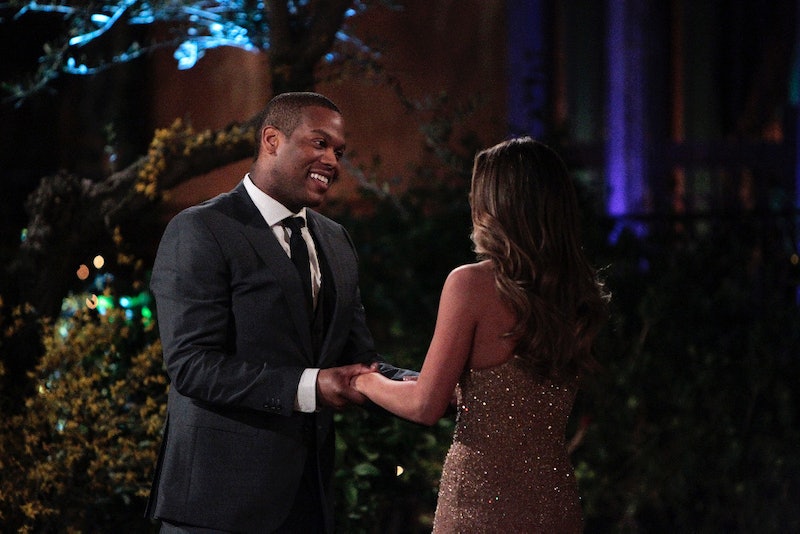 Who's ready for the next round of The Bachelorette? To get you excited for JoJo Fletcher's debut as the Bachelorette on May 23, the ABC reality dating series has released the first photos of the Season 12 contestants. Not only are there some very good-looking men (would you expect anything less?), but the cast seems to more diverse than most past seasons. So, I'm just going to ask the question I know some of Bachelor nation might be wondering, is this the most diverse Bachelorette cast ever? Let's just say it's definitely up there with Desiree Hartsock's Bachelorette season and Sean Lowe's Bachelor season, which appears (based on a graphic designed by writer and video artist Karen X. Cheng) to be the most diverse seasons, yet. FYI, Lowe ended up choosing and marrying Catherine Giudici, who is biracial.

Diversity is something that many fans of both The Bachelor and The Bachelorette have expressed time and again as something they would like to see embraced more fully when both series are in the casting process. Yes, there have been a handful of non-white contestants here and there, but they never seem to make it far, a sore point for many fans. There are exceptions including Giudici, Roberto Martinez (he won Ali Fedotowsky's season), and Mary Delgado from Byron Velvick's season, but those instances are few and far between. Of course, there was also Juan Pablo Galavis, who was the first Latino Bachelor.

Following Ben Higgins' Bachelor season, there was talk that Caila Quinn, who is also a woman of color, would be cast as the next Bachelorette, but that clearly didn't go as planned, because JoJo ended up nabbing that role after her heart was broken on national television. It's clear that the dating series needs to expand its horizons when it comes to casting, especially for the Bachelor and Bachelorette stars, but perhaps this newest Bachelorette cast could start to help that process along. themselves I mean, even Lifetime's hit series UnReal cast a black bachelor for Season 2.

Now, here's hoping that Jojo's season is permanent a step back in the right direction and that the casts will continue include more diversity among contestants (and stars) in the future.