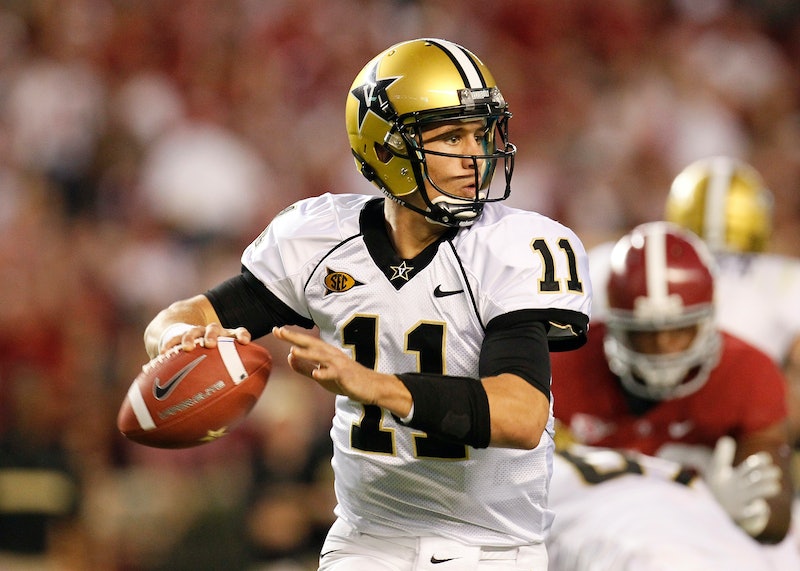 In less than two weeks, the new season of The Bachelorette starts — and lucky for fans, the 26 men who are competing for JoJo Fletcher's heart have been announced. A quick scan of the list shows they're all attractive and eligible suitors, but one name may sound familiar: Jordan Rodgers. If you're a football fan, you're probably asking yourself: Is Jordan Rodgers related to Aaron Rodgers? Ding, ding, ding! You are correct. It turns out that the Green Bay Packers QB is Jordan's older bro. Football runs in the family, since Jordan is a retired quarterback himself. He previously played for the Tampa Bay Buccaneers, the Miami Dolphins, and the BC Lions in the Canadian Football League. Before that, he attended and played football at Vanderbilt University.

If you read Jordan's Bachelorette bio, you'll find that family is important to him. When asked who he admires most in the world, he said, "My grandparents. They broke the mold after their generation. They are the most loving people and best example of love and selflessness." How sweet is that? I'd also imagine he looks up to his brother, since he followed in his football footsteps. After all, they both played the same position. There's also one more Rodgers brother — Luke, who happens to be the oldest.

Considering he grew up with a successful athlete for a brother, I'd imagine the 27-year-old is used to some friendly competition. This very well may work out in his favor, since there are 25 other guys on the ABC show competing for JoJo's attention and affection. Back in March, Us Weekly reported that Jordan is "a front-runner already," when it comes to winning over the Bachelorette. A source told the magazine, "He and JoJo are really hitting it off."

Since The Bachelorette doesn't air until May 23, fans will just have to wait and see what happens. Hopefully Jordan can score a touchdown with JoJo's heart. He probably has a really good shot, as long as he doesn't use cheesy football puns, like I just did.