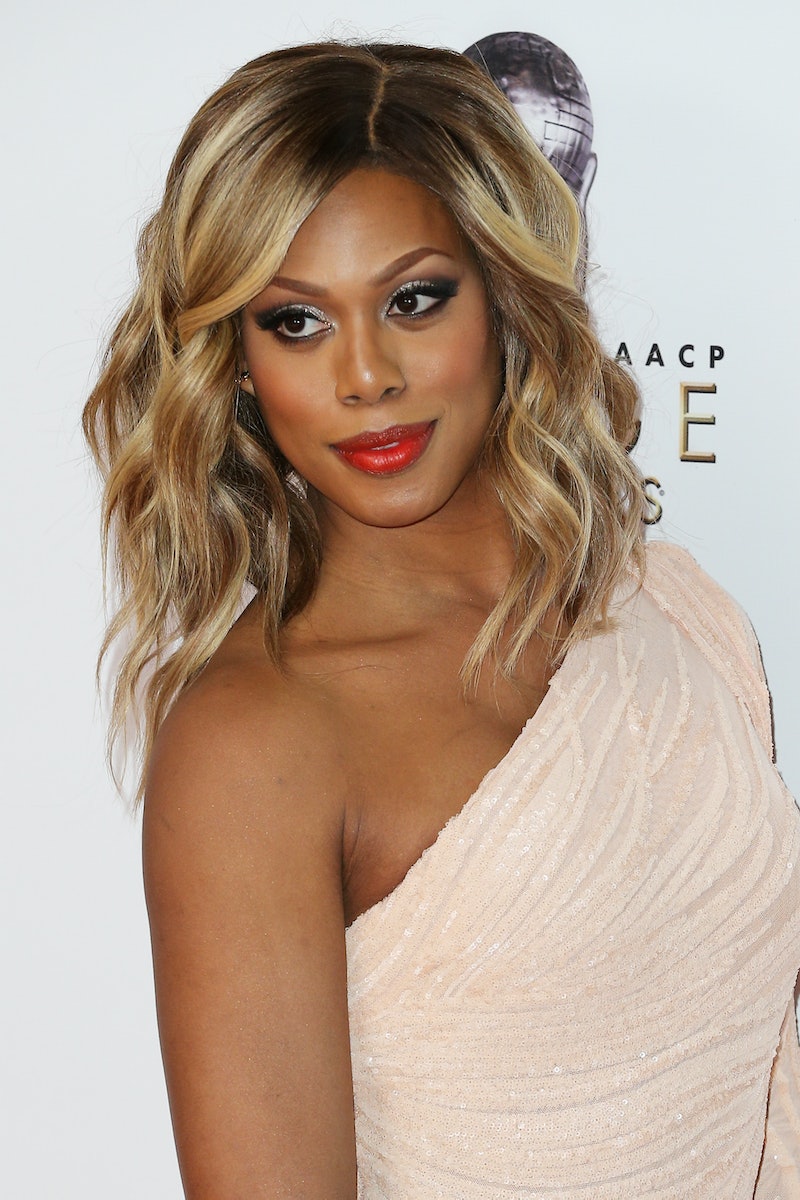 Laverne Cox is ready for fans to do the Time Warp again. As if the announcement of the Orange Is The New Black star taking on the role of Dr. Frank-N-Furter in Fox's two-hour televised presentation of Rocky Horror Picture Show wasn't already enough, now fans have a picture of the Laverne Cox as Frank-N-Furter to prove she can definitely pull-off the look. Released exclusively through Entertainment Weekly, the new costumed photo shows Cox dressed in black leather, a studded neck-chocker, a high-seated red-haired ponytail, and eye make-up that could kill. She's not only got the talent for the role, but the attitude as well.

She stands next to fellow cast member from the upcoming show, Ben Vereen, who is dressed as his character, Dr. Scott. However, Cox pulls focus in the shot by looking like nothing but pure perfection . But that doesn't seem to come as much of a surprise, despite obvious concern from fans. “I get tweets from people, ‘Please don’t f*** up Rocky Horror Picture Show!’ ” says Cox in EW, before calming all possible nerves with, “I showed my brother pictures of me in character and he was like, ‘You were preparing your whole life for this.’ ” And, when looking at the picture, it's clear how true that statement is.

Cox's look for the character has changed in comparison to Tim Curry's black-haired curly look, of course. But this new twist on the character is exactly what their production seemed to need. “We were on set and a reporter saw me and said I looked like the love child of Grace Jones and David Bowie. I said ‘That’s exactly right.’ I think we mix up the look more than they did in the original,” Cox told EW. “It’s inspired by the original but it’s really our own take. It’s way more elaborate and couture. [Director] Kenny Ortega had this vision that Frank was at this old theater and found these old burlesque costumes and is, like, using them and wearing them now but has altered them a bit.”

Rocky Horror Picture Show starring Laverne Cox, Ben Vereen, and the rest of the star-studded cast will be bringing their latest rendition of Dr. Frank-N-Furter to TV in late 2016. Until then, perhaps you should re-watch the original and compare Curry and Cox's performance — because it seems like Cox will definitely be stepping it up.