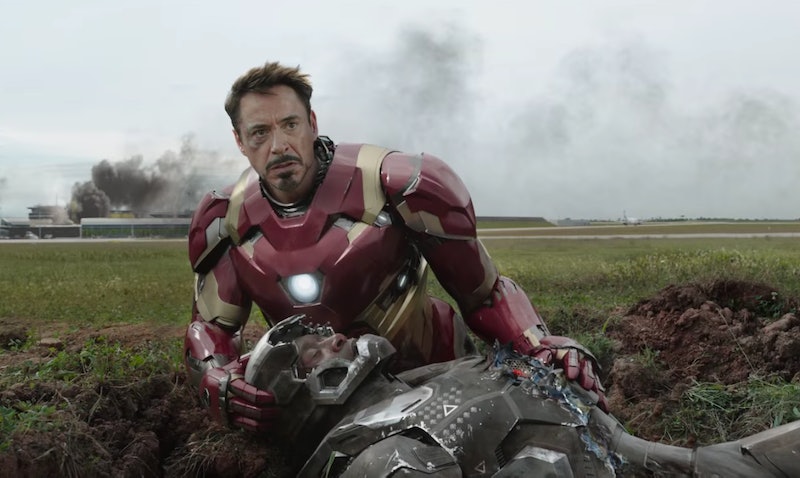 At the end of Captain America: Civil War, it looked like both Iron Man and Captain America were ready to call a cease fire, at least as far as the Sokovian Accords were concerned. After seeing the prison Secretary of State Thaddeus Ross set up for supers who refused to register/work only on the orders of the government, Tony seemed to be having second thoughts about getting into bed with Ross. And even though he and Cap didn't leave things on the best of terms, what with the whole Cap's BFF killing Tony's parents back in the day thing, Tony seemed more than willing to let Cap go on the run. As for Cap himself, he apologized to Tony in a letter and promised to be there if Tony ever needed him. So, it's all rainbows and butterflies, right? Wrong. There's one thing you missed about the Civil War ending that suggests that Cap and Iron Man still have a lot to work through.

After the dust has settled in Civil War, Cap sends Tony "Stank" a package: a letter of apology and a small cell phone. In his letter, Cap tells Tony that he'll only be one phone call away, suggesting that the next Avengers movie will probably start with Cap receiving some kind of emergency phone call. The phone is an olive branch of sorts, but what you might not have noticed is that the phone is actually a burner phone, which means it can't be traced.

You might be thinking, "Of course it's a burner phone, Cap is on the run — he might be Tony's friend, but he's not friends with Ross!" And that's true. Cap is no doubt the subject of a worldwide manhunt, so it makes sense that he would ensure that his phone couldn't be traced. What if the package got into the wrong hands? So sending Tony a burner phone is a logical move. But, it also implies that Cap doesn't trust Iron Man as much as fans might hope. At least, not enough to make it easy for Tony to find him.

Fans hoping that Tony and Cap would be quick to bury the hatchet are definitely going to have to re-evaluate their expectations. The burner phone confirms that Cap isn't willing to risk Bucky to solidify his relationship with Tony. Unless Tony can promise he won't try to kill Bucky should they meet again, it looks like Cap is going to keep his distance. Who knows what will happen the next time they meet.