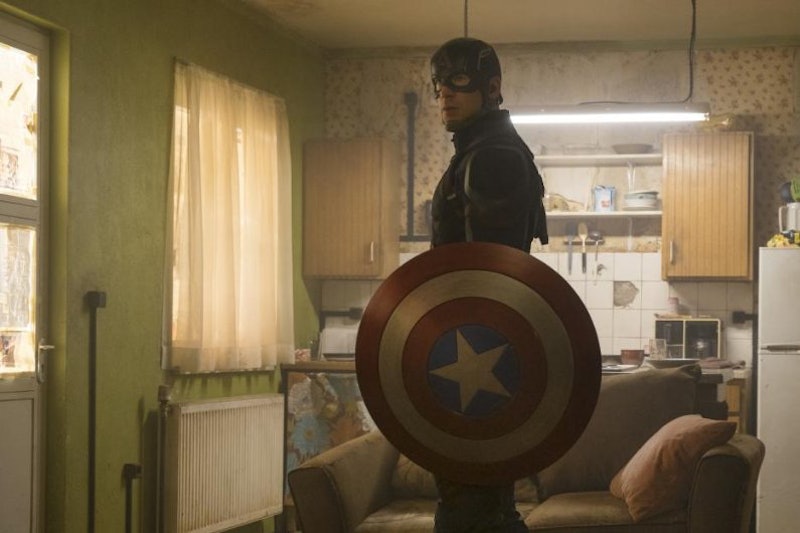 Readers of the comic book version of Marvel's Civil War know that Captain America dies at the end, assassinated by a combination of Crossbones and a brainwashed Sharon Carter. So many were expecting Cap to meet the same fate at the end of Captain America: Civil War, given both the stakes of the film and the inclusion of those two aforementioned characters. But Crossbones ended up being nothing more than a blip, Sharon Carter was good to the bone, and most importantly, Cap lived to fight another day. But did he really?

Before you go thinking that I'm crazy, hear me out. While Steve Rogers, the man behind the mask, inarguably survived the battle, Captain America did not. The flag waving, superhuman defender of American exceptionalism made his final stand in the brutal fight against Iron Man, ending the slow death of the symbol that actually began not long after he was created. In Captain America: The First Avenger, the first chinks in the armor begin when Cap is forced to go rogue to rescue Bucky and then eventually take down the Red Skull, since the government is more interested in only using Cap as a symbol rather than as a weapon against evil.

Cap's distrust of the government greatly increases in Captain America: The Winter Soldier, when he discovers both the government's plan to set up a giant weapon with the ability to kill anyone in the world at any time, as well as the Hydra infiltration that has occurred within S.H.I.E.L.D. These events leave Cap questioning who he is fighting for, and running out of people whom he can trust. Then there's Civil War; the breaking point. The Sokovia Accords threaten to put Captain America under the jurisdiction of a government body for good, and given his previous experiences, he is reluctant to sign. His personal connection to Bucky certainly exacerbates his unwillingness to approve the Accords, but his opposition to it really comes down to his wariness of authority and disillusionment over what Captain America has come to represent.

So he fights not only against Iron Man, but against the whole system that created him. And when it's all over and he defeats Iron Man, he abandons his shield — the main symbol of Captain America. Obstensibly, he does so because Iron Man tells him that he doesn't deserve it because his father made it, but the bigger picture is that Steve Rogers no longer wishes to carry it. Because whatever it was that Captain America stood for and whomever it was that he fought for are no longer clear to Rogers. At the very end of the film, when Rogers rescues his teammates from prison, he's not even wearing his uniform — offering more proof that the Captain America persona is dead.

And there is precedence for this in the comics as well. Steve Rogers has become disillusioned with being Captain America a number of times and given up the identity. In the '70s, a Watergate-like scandal within the U.S. Government caused him to take on the identity of Nomad, since he no longer believed he had a country. He becomes Cap again fairly quickly, but retires again in the '80s due to more government corruption, going by the generic "The Captain" for a time.

So even though Steve Rogers lives on in the MCU, Captain America is, for all intents and purposes, dead. Man, this year's Fourth of July is going to be a bummer.