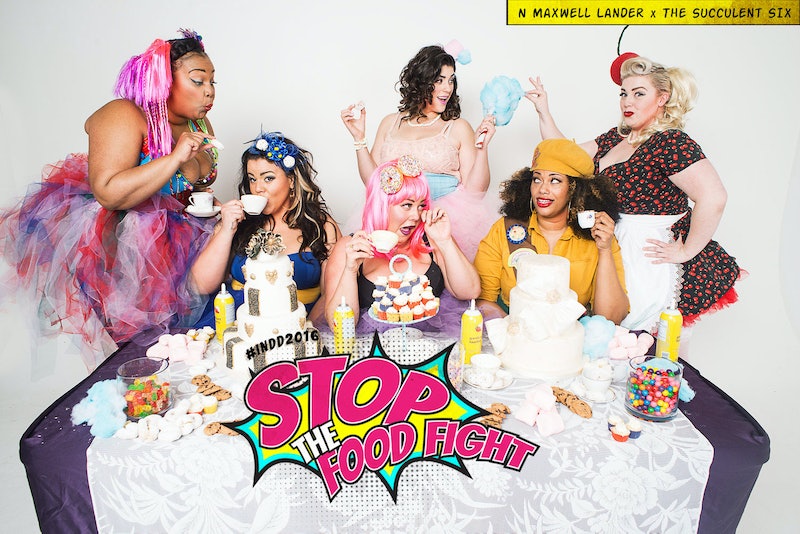 For this year's International No Diet Day, six Toronto women came together to challenge diet culture and celebrate fat acceptance. The group of body and fat positive activists, which calls itself The Succulent Six, shot its first photo series, aptly named Stop The Food Fight, earlier in May. It was a superhero-themed, fun, and cheeky approach to a serious issue within the body positive community — if not the world at large.

Sporting tutus, bold makeup, and wild accessories, these visibly fat women certainly aren't hiding from anyone — the way society so often encourages plus size people to do. Yet the focus of the images isn't the shape of their bodies. Instead, the women are covered in frosting, laughing and having a great time with one another while some sport oversized cherries or cotton candy in their hair.

This is a long cry from the "good fatty" narrative that has become so expected from mainstream body positivity; the narrative that gives plus size people a pass as long as they proclaim they love kale and running marathons. The shoot, and its release on International No Diet Day, took a proud stance against the shaming of fat women for the foods they eat, and against size discrimination in general.

This won't be the group's only activist endeavor: The Succulent Six is also planning a body positive pool party in Toronto and another creative visual project thereafter. The collective was the brainchild of Toronto triple threat Ivory Conover, who sings, dances, and acts professionally. "Ivory strategically picked individuals she knew had a heart for the body positive movement that had voices and were not afraid to use [them]," group member and blogger Annika Reid shares with me via email. "Each of the members of The Succulent Six all are [body positive] activists in their own way."

Conover also chose to work with photographer Maxwell Lander because of his own story regarding overcoming body shaming, according to Reid. In addition to Reid and Conover, the group includes plus models Ashley Sharma and Rachel Marcus, hairstylist and makeup artist Julia Pegg, and burlesque performer Belle Jumelles. For the International Diet Day shoot, each member took on a food-inspired superhero persona. Marcus became "Cookie Cutta" while Connelly transformed into "Dirty Dottie Donuts." Their mission to "stop the food fight" tackles the food shaming that can come both from others and from ourselves.

"We'll go out to dinner and shame ourselves for wanting desert, or feel guilty for the fast food we ate for lunch," shares Reid. "The cycle is ongoing and damaging to how we see ourselves. Ivory's vision [for the shoot] was for us to have curvy superheroes coming to help save the day [and] for there to be one day where you can indulge in the treat or food item of your choice without fear or post-self loathing. Superheroes are usually known for saving someone, stopping something evil from happening, and that's what we wanted to champion with this campaign."

Of course, whether or not a woman wants to eat a cupcake or quinoa should having no bearing on the level of humanity she's treated with. This is why seeing plus size women openly eating and enjoying junk food still feels so revolutionary to me.

That said, there are still many plus voices online who take every opportunity to prove that they work out and eat healthily, often considering their choices to be advancements in body positive thinking. However, while taking a gym selfie or snapping a 'gram of your kale salad are our own choices to make, they do not necessarily promote size acceptance. The idea that fat women could be in control of their own bodies and build their own relationships with food outside of society's diet culture is undoubtedly something we aren't hearing often enough — something that Reid can personally identify with.

"Growing up, I had a horrible relationship with food," says Reid. "I suffer from depression and anxiety so I used food as a comfort. Whenever any major changes were happening in my life, I would use food the help me get through [them] in a negative way. Problem was [that] after I would indulge, I would hate and shame myself for it. I would tell myself how much damage I was doing to my body and put myself on harmful diets for weeks at a time in hopes of undoing what I thought I had done to myself by eating so much."

Reid's past relationship with food sounds not unlike my own. In fact, this dangerous yo-yo dieting is exactly what Health At Every Size, a school of thought the Succulent Six hope to spread, is meant to challenge and prevent. Being part of the body positive community, however, helped transform Reid's relationship with food.

"I eat for health, but I also do not deprive myself," says Reid. "I enjoy treats when I feel like having them and I enjoy the gift of food rather than this up and down battle that I used to have in the past."

Reid shared her journey along with the rest of The Succulent Six when they spoke on a panel on International No Diet Day at The Forgiveness Project headquarters. This discussion along with the "Stop The Food Fight Campaign" is only the beginning for the collective, though. And personally, I can't wait to see how this group continues to save the day and challenge us to think differently.

More like this
Plus-Size Vintage You Can Buy Online Or In Store
By Dominique Norman
The Millennial “Queen Of Manifesting” On Turning Jealousy Into Inspiration
By Faith Xue
Melissa Barrera On Anxiety, Aloe Vera & Finding Self-Love
By Brittany Leitner
Rita Ora’s Sheer Dress & Mermaid-Inspired Prosthetics Stun At British Fashion Awards
By Sophie McEvoy
Get Even More From Bustle — Sign Up For The Newsletter